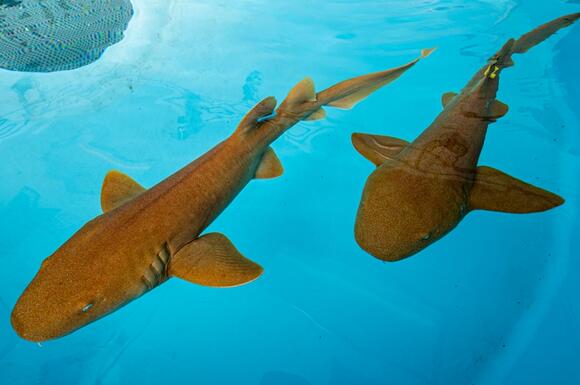 (NEXSTAR) – Since the start of the pandemic, various animals have made headlines when testing positive for COVID-19: mink on farms, deer in the wild, big cats at zoos. Now, another animal is now receiving attention, and not because of a positive test, but because of the positive impact it could have on the fight against coronaviruses.

Researchers are looking to sharks and their antibody-like proteins to neutralize the current COVID virus and prepare for viruses that could come in the future.

Coronaviruses, which refer to specific types of viruses, have existed long before COVID-19 was detected. As the John Hopkins School of Medicine explains, coronaviruses are named based on their appearance — “corona” means “crown,” and the term is used to describe the virus’s out layers, which are covered with spike proteins. In 2019, a coronavirus, SARS-CoV-2, was found. It causes a respiratory illness, which is now known as COVID-19.

VNARs (variable new antigen receptors), which are unique antibody-like proteins derived from the immune systems of sharks, can prevent the virus that causes COVID, its variants, and related coronavirus from infecting human cells, a study from the University of Wisconsin-Madison has found.

In the study — a collaboration between UW-Madison, the University of Minnesota, and Elasmogen, a Scotland biomedical company that develops therapeutic VNARs — shark VNARs were tested against SARS-CoV-2 and a version of the virus that cannot replicate in cells. Three VNARs from a “pool of billions” were found to be effective in stopping the virus from infecting human cells.

The three VNARs were also determined to be effective against SARS-CoV-1, which caused the 2003 outbreak of SARS. Shark VNARs were also able to neutralize WIV1-CoV, a variant currently found only in bats.

According to the study, published in Nature Communications , one of the VNAR, 3B4, attached to a groove on the spike protein and blocked it from binding to the human cell. Researchers say this same groove is similar to other coronaviruses, including MERS. Where it binds does not change when it comes to variants, either, the study explains.

US children hospitalized with COVID in near-record numbers

Another VNAR, 2CO2, appeared to lock the spike protein in an inactive form, researchers report. Where this VNAR binds, though, is altered in some of SARS-CoV-2’s variants. Researchers say they “do not have any structural data for the binding location” for the third VNAR, 4C10, but virus “mutations do not have a substantial effect” on its effectiveness.

Researchers say multiple shark VNARs could be included in a cocktail for future therapies. This is cheaper and easier to manufacture than human antibodies, but has not yet been tested in humans.

“The big issue is there are a number of coronaviruses that are poised for emergence in humans,” said Aaron LeBeau , a UW–Madison professor of pathology who helped lead the study, in a news release . “What we’re doing is preparing an arsenal of shark VNAR therapeutics that could be used down the road for future SARS outbreaks. It’s a kind of insurance against the future.”

U.S. facing threat of a “tripledemic” this winter

KSNF/KODE — Just when we thought the worst of the COVID-19 pandemic was over, experts are warning that a “tripledemic” is heading our way this winter. This trio of viral threats includes respiratory syncytial virus (RSV), influenza (flu), and COVID. Many children’s hospitals across the country are already experiencing a surge, fueled by a spike in […]
3 DAYS AGO
FOX59

EVANSVILLE, Ind (WEHT) – An Evansville woman was sentenced to 25 years in jail on Friday following the 2021 overdose death of her three-year-old daughter. Makaylee Opperman was charged with neglect of a dependent causing death in connection to the death of her daughter, Kamari Opperman. Makaylee pleaded guilty in October to neglect of a […]
3 DAYS AGO
FOX59

ELKHART COUNTY, Ind. — An Elkhart man was found dead nearly a week after he went missing. On Friday, the Elkhart County Sheriff’s Office said the Michigan State Police found the vehicle that Garvin Roberson was driving when he went missing Sunday. A Silver Alert was issued in connection with his disappearance Monday. The vehicle […]
3 DAYS AGO
FOX59

Indiana man arrested for attempted murder of his mom after stabbing, strangling her

BATESVILLE, Ind. — An Indiana man who police say strangled and stabbed his mother multiple times has been arrested on multiple charges, including attempted murder. Dalton Hall, a 22-year-old man from Bloomington, is currently being held in Ripley County Jail for his alleged role in the stabbing of Heather Mulcahy. His charges include: Attempted murder, […]
1 DAY AGO
FOX59

A woman who hit a vehicle, seriously injuring another woman, had used methamphetamine within the previous 24 hours, court documents state.
12 HOURS AGO
FOX59

Police believe everyone involved in the case has been accounted for, and one woman was taken into custody for questioning.
3 DAYS AGO
FOX59

Person dead after near north side shooting

INDIANAPOLIS — A person has died after being shot Friday night on Indy’s near north side. Indianapolis Metro police were called around 7:50 p.m. to the 3700 block of N. Washington Blvd. for a person shot. This is near the intersection of 38th Street and Central Avenue. Upon arrival, IMPD officers found a man with […]
3 DAYS AGO
FOX59

INDIANAPOLIS — FedEx has confirmed that a west side supply chain facility will be permanently closed beginning in January. FedEx Supply Chain facility located at 225 Transfer Drive currently employs 179 workers and will begin reducing shifts and terminating positions on Jan. 31, the company said. The first phase of the shuttering of the facility […]
6 HOURS AGO
FOX59

On Friday morning, Kokomo police announced Spence and her daughter were found safe KOKOMO, Ind. — Police in Kokomo are searching for a 31-year-old mom and her infant daughter. Police say April Spence and her 3-month-old, Dominique, haven’t been seen since November 28. Kokomo police said a missing person report was made to them, but […]
4 DAYS AGO
FOX59

Several hospitals are enacting visitation restrictions as the state is seeing an increase in flu activity.
13 HOURS AGO
FOX59

Richard Allen’s attorneys speak out, call into question evidence: ‘Rick has nothing to hide’

DELPHI, Ind. — The attorneys for Richard Allen, the man accused of murdering Abby Williams and Libby German in Delphi in February 2017, have fired back against the evidence presented by investigators in the recently released court documents. Attorneys Brad Rozzi and Andrew Baldwin stated they argued on behalf of unsealing the court documents because […]
4 DAYS AGO
FOX59

TERRE HAUTE, Ind. (WTWO/WAWV) — 2nd Update: Indiana State Police have identified the man who died in Thursday’s officer-involved shooting as James Ready, 42, of Terre Haute. The Terre Haute Police officer involved in this incident is Patrol Officer Adam Noel, eight years of service. Officer Noel has been placed on administrative leave, which is […]
4 DAYS AGO
FOX59

INDIANAPOLIS – Indianapolis police are asking for the public’s help in locating a man wanted in connection with a double homicide. The Indianapolis Metropolitan Police Department is trying to find 33-year-old Lamar Ball. He’s accused of killing Justice Wills and Eric Colvin last year. On June 28, 2021, IMPD officers responded to a crash at […]
4 DAYS AGO
FOX59

Indianapolis police arrest man in connection with series of robberies

An Indianapolis man is in custody after police say he robbed a series of businesses in a four-month timeframe.
4 DAYS AGO
FOX59

Man shoots father before killing himself in Fayette County

The sheriff's department said that according to Roszell Jr. and witnesses at the scene, Roszell III shot his father and then shot himself inside their home.
4 DAYS AGO
FOX59

Man dead after shooting on south side of Indianapolis

INDIANAPOLIS – Indianapolis police say a man died in a shooting Friday morning on Indy’s south side. Officers were dispatched to the 600 block of W. Hanna Avenue for a reported shooting around 5:25 a.m. They found a man later identified as 21-year-old Elijah Mitchell. He was pronounced dead at the scene. Police are investigating […]
3 DAYS AGO
FOX59

UPDATE: Governor Holcomb has been released from the hospital and is resting at home. INDIANAPOLIS — Indiana Gov. Eric Holcomb is in the hospital after being diagnosed with pneumonia, according to a Tweet from his official account. The Governor went to the doctor on Thursday afternoon thinking it was the flu, the tweeted statement said. […]
3 DAYS AGO
FOX59

The Bartholomew County Humane Society is trying to find out more information about a dog that was abandoned at its facility Tuesday morning.
3 DAYS AGO
FOX59

SALT LAKE CITY (AP) — Lauri Markkanen had 24 points and 13 rebounds to lead the Utah Jazz to a 139-119 victory over the Indiana Pacers on Friday night. Rookie center Walker Kessler scored a career-high 20 points on 7-of-7 shooting and grabbed 11 rebounds for Utah. Jordan Clarkson had 19 points and Collin Sexton […]
2 DAYS AGO
FOX59

COLUMBUS, Ind. — Nearly 40 firefighters battled a blaze in downtown Columbus for over four hours on Saturday night amidst freezing temperatures as flames tore through the old building on 5th Street and caused large portions to collapse into rubble. The Columbus Fire Department said no occupants were in the building at the time of […]
1 DAY AGO