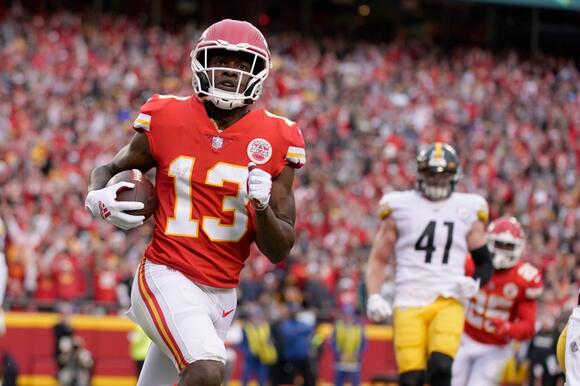 Bengals quarterback Joe Burrow admitted that this week he heard the warning from Baltimore defensive coordinator Wink Martindale against putting him in the Pro Football Hall of Fame so early in his young NFL career.

Burrow proceeded to shred the Ravens for 525 yards passing in a blowout of their AFC North rivals.

He just may need to replicate that performance on Sunday, when AFC West champion Kansas City comes to town. After all, the Chiefs have their own quarterback — Patrick Mahomes — who appears destined to one day land in Canton, Ohio.

“I think whoever is lining up across from us, we’re going to be excited to play,” Burrow said in brushing aside any talk of a showdown between quarterbacks.

“This is a big opportunity, whether it’s the Chiefs or whoever we throw out there against us. We have an opportunity to win and make the playoffs.”

That would take a whole lot of pressure off their regular-season finale in Cleveland, and give Bengals coach Zac Taylor the rare opportunity to rest Burrow and some of his other stars ahead of a wild-card playoff game the following week.

But beating the Chiefs right now just might be the toughest task in football.

After a lousy start left them with a losing record seven games into the season, Mahomes and the rest of his cohorts have turned things around in a remarkable way.

They have ripped off eight consecutive wins, including last week’s 36-10 romp over Pittsburgh to clinch their sixth straight division title , and are back near full strength after a COVID-19 outbreak .

“It’s a big game any way you want to phrase it,” Taylor said. “You want to win the division and go to the playoffs. The Chiefs happen to be the team that’s right in front of us that allows us to do that. It’s a tremendous football team. They’ve had a lot of success over the years. We understand that. But we don’t put too much into that. This is about us.”

That’s not to say the Chiefs don’t have plenty riding on the outcome. They head into the weekend leading Tennessee by one game for the No. 1 playoff seed, which means the lone AFC bye and home-field advantage throughout the playoffs.

As for his showdown with Burrow on Sunday?

“Not only is he a great football player, I think he’s a great leader,” Mahomes said. “He can lead anybody, no matter where he’s at. He can go out with swag, that mentality, ‘We’re going to win no matter what.’ It takes a lot of experience and going out there and doing it for people to believe it.”

TAKE AWAY THE HOUSE

Chiefs linebackers coach Matt House was hired as the defensive coordinator at LSU this week. But Chiefs coach Andy Reid said this week that House will continue to work in Kansas City as long as the team is alive in the playoffs.

“He’ll be tremendous for the Tigers,” Reid said. “We have a bunch of them on our team. They’re fired up for him.”

He’s not the only Bengals player on record watch, though. Wide receiver Ja’Marr Chase needs 278 yards receiving to pass Chad Johnson (1,440) for the most in a single season, and running back Joe Mixon’s 16 touchdowns overall are one shy of Carl Pickens’ record set in 1995 and his 13 TD runs are two shy of Ickey Woods’ record set in 1988.

The Chiefs have dominated the turnover battle in recent weeks, a big reason they’ve ripped off eight straight wins. The Chiefs have forced 20 turnovers and committed six over the past seven games.

Last week was a prime example: They picked off Steelers quarterback Ben Roethlisberger while recovering two fumbles while not committing a turnover.

Want to know how much offensive firepower will be on display Sunday? The AFC offensive player of the week awards gives a pretty good indication.

End Zone Extra: Sign up to get our Kansas City Chiefs newsletter twice a week

Mahomes has won it twice and tight end Travis Kelce picked up the honor for Kansas City in Week 15. Burrow also has two awards, including this past week, while Chase won it for Cincinnati in Week 7 and running back Joe Mixon in Week 12.

That’s nearly half of the honors given out this season.

One way teams have tried to slow down Kansas City is by playing two safeties in a “shell” deep downfield, forcing them to dink-and-dunk their way downfield on offense.

But there have been signs the past few weeks that Mahomes and Co. have figured out that strategy, and that means it might not be so successful for Cincinnati.

“Teams are mixing more than what we think,” Reid said. “We’re seeing some shell, some single safety, some man — they throw a lot at you and this crew is no different. They have a whole package that they really execute well.”

Chiefs QBPatrick Mahomes' newborn son will go by the same name as his father, but will also go by Bronze, a name brought forward by his uncle.
KANSAS CITY, MO・18 HOURS AGO
FOX4 News Kansas City

Family have identified Roman Andrews as the 4-year-old who died after getting ahold of a gun and accidentally shot himself earlier this week.
KANSAS CITY, KS・13 HOURS AGO
FOX4 News Kansas City

The Kansas City Chiefs and the Denver Broncos have been flexed out of Sunday Night Football on Dec. 11, putting the Dolphins and Chargers in primetime.
KANSAS CITY, MO・1 DAY AGO
FOX4 News Kansas City

The Kansas City Police Department have a person in custody believed to be involved with an overnight homicide at a liquor store Tuesday.
KANSAS CITY, MO・2 DAYS AGO
FOX4 News Kansas City

The Missouri Supreme Court could spare a St. Louis man who's set to be executed Tuesday night for the 2005 murder of a police officer.
MISSOURI STATE・2 DAYS AGO
FOX4 News Kansas City

The KDOC and KBI are investigating after a 53-year-old inmate was found dead in the Lansing Correctional Facility infirmary on Saturday.
LANSING, KS・2 DAYS AGO
FOX4 News Kansas City

5 arrests, 9 tickets given out after K-State vs. KU football game

Chiefs QB Patrick Mahomes will be one of several featured in Michael Vick's new docuseries highlighting the evolution of the Black quarterback.
19 HOURS AGO
FOX4 News Kansas City

With KU having its best season in a decade and K-state headed to the Big 12 title game, both teams are littered with all-conference selections.
MANHATTAN, KS・12 HOURS AGO