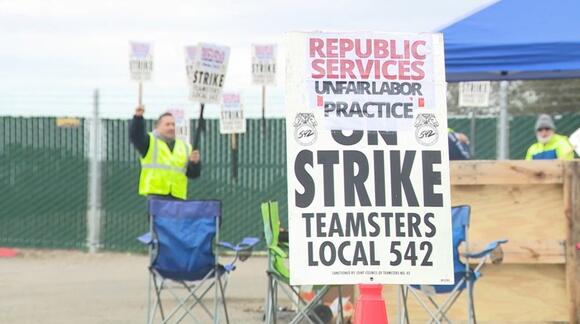 SAN DIEGO – Negotiations are ongoing between Republic Services and more than 250 of its union workers in a bid to end a strike that’s creating headaches for local residents as trash keeps piling up.

Workers walked off the job this month over contract demands of better working conditions, urging Republic to address long work hours and unspecified harassment on the job. As of 4 p.m. Thursday, sanitation workers were waiting on a counteroffer from Republic, a Teamsters Union Local 542 representative told FOX 5.

In a statement Thursday, Republic said it is making progress in collecting trash for customers and remains “committed to bargaining in good faith in an effort to reach a fair agreement.”

But as the strike continues into its second week, people are taking matters into their own hands in hauling bags of trash to landfills or hiring junk haulers to address their overflowing dumpsters. The homeowners association for Sail Bay Shores in Pacific Beach paid several hundred dollars for haulers to remove their trash.

“(The junk haulers) didn’t know it was so bad when they made the initial bid, probably $150,” said Suzanne McQuaide, a board member on the homeowners association, “but it turned out to be $450 and took two men an hour to remove everything.”

While workers keep picketing to improve their conditions, residents have been seen self-hauling trash to landfills, leading to some long lines at times.

Junk haulers like JunkMD+ are inundated with calls as people try to deal with trash overflow.

“The one dump that stays open all day is the Miramar location,” JunkMD+ co-owner Clemencia Sandoval said, “so you can just imagine everybody is headed to that one location and there’s just not enough capacity there either. Long lines, long waits, the rain has also added another interesting layer to everything.”

They’re used to removing couches and mattresses, but are suiting up to deal with trash removal at sites around San Diego County.

“There are complexes that are taking one, two, three, four truckloads to completely clean out and we are keeping our normal pricing,” Sandoval said. “We are at an apartment complex in Scripps Ranch with 250 townhomes, each with their own tote, and we are trying to figure out how many truckloads it will take to haul away the trash.”

It’s unclear if an agreement will be reached Thursday or if there is a hard stop of negotiations for the day.

In a tweet late Thursday, San Diego Mayor Todd Gloria told residents that hadn’t received trash pickup to contact Republic by phone at 619-421-9400 or via email at CustomerServiceSD@RepublicServices.com.

Gloria said he’s been in communication with the company and workers to “urge compromise so services can resume.”

“The City is examining its franchise agreement with Republic Services to determine enforcement options to address noncompliance with its terms,” the mayor said.

City steps in to clear out Logan Heights drug house

The city is cleaning up and clearing a drug house that has been a nuisance to a neighborhood in Logan Heights for years.
SAN DIEGO, CA・20 HOURS AGO
FOX 5 San Diego

The City of San Diego planned to hold a lottery to determine which short-term rental owners would receive a permit, but the applications fell short of the maximum short-term rentals allotted under the new regulations.
SAN DIEGO, CA・23 HOURS AGO
FOX 5 San Diego

The holiday season has soured a bit for an Ocean Beach business that has been burglarized twice in the past few weeks.
SAN DIEGO, CA・1 HOUR AGO
FOX 5 San Diego

Homeowners in San Diego have one last chance to apply for an earthquake grant to protect their homes, said a spokesperson for the California Earthquake Authority on Tuesday.
SAN DIEGO, CA・3 DAYS AGO
FOX 5 San Diego

The name for San Diego's new electric mini street sweeper has officially been decided after more than 1,000 voters participated in the month-long contest, the city said Wednesday in a press release.
SAN DIEGO, CA・2 DAYS AGO
FOX 5 San Diego

San Diegans have to turn in applications to get a short-term rental license by Wednesday at 5 p.m.
SAN DIEGO, CA・2 DAYS AGO
FOX 5 San Diego

A record number of Los Angeles residents have made the move to San Diego, as well as out-of-state, according to a new Redfin study.
SAN DIEGO, CA・7 HOURS AGO
FOX 5 San Diego

It's designed to create transparency and help people stay informed about issues in the community.
OCEANSIDE, CA・1 DAY AGO
FOX 5 San Diego

A woman in her 60s was stabbed Thursday near the YMCA in Mission Valley, said the San Diego Police Department.
SAN DIEGO, CA・1 DAY AGO
FOX 5 San Diego

San Diego among top places to be single in US, study shows

Single and ready to mingle? According to WalletHub's report, San Diego is among the top ten dating cities in the U.S.
SAN DIEGO, CA・2 DAYS AGO
FOX 5 San Diego

A man and his dog were assaulted by a group of four people while on a walk in the Ocean Beach area, authorities said.
SAN DIEGO, CA・49 MINUTES AGO