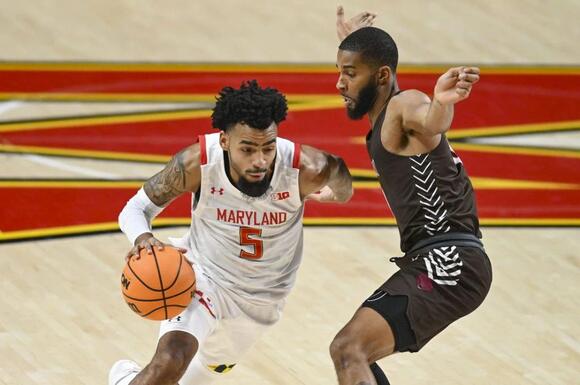 Hakim Hart scored 17 points and Donta Scott contributed 15 points and eight rebounds as Maryland (8-4) surged in the second half after trailing by seven before intermission.

Scott helped trigger the surge with a 3-pointer. The shot came with 15:53 left and was the Terps’ first of the game after nine misses from beyond the arc. Russell and Hart added two buckets each during the run, which put Maryland in front 52-45.

Maryland hiked its lead to 60-49 midway through the half when Hart swished a 3-pointer. Over the final 10 minutes, Ayala kept the Terps in charge with 13 points.

There were eight ties in the first half before Choh gave Brown a small cushion with all of the Bears’ points in an 8-2 run. Choh’s 3-pointer sparked the surge and his driving 3-point play closed it, giving Brown a 35-28 lead

But Russell, who had to be helped off the floor two days earlier after sustaining a knee injury in a win over Lehigh, scored seven points in the final 2:04 of the half to give Maryland a boost heading into the break.

After shooting just 37 percent from the floor in the first half, Maryland made 60 percent of its tries in the second half.

Kristaps Porzingis scored 29 of his career-high 41 points in the first half as the Washington Wizards led wire-to-wire in
WASHINGTON, DC・11 HOURS AGO
Sportsnaut

Two years ago, Trevor Lawrence and Zach Wilson were the top two picks in the 2021 NFL Draft. While both
BALTIMORE, MD・14 HOURS AGO
Sportsnaut

Baltimore quarterback Lamar Jackson tweeted — and then deleted — a profane response to a social-media critic after the Ravens’
BALTIMORE, MD・7 HOURS AGO
Sportsnaut

The injury uncertainty around the Los Angeles Rams continues to cloud the defending Super Bowl champions. In Sean McVay’s latest
13 HOURS AGO