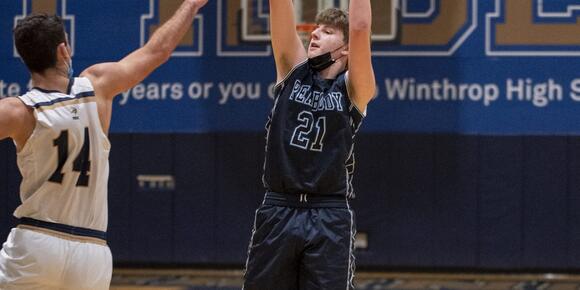 WINTHROP — It may have been a fairly close game at halftime, but the Peabody boys basketball team came out in the second half with a suffocating defensive effort and was able to take home a 62-46 win over Winthrop in the championship game of the inaugural David Green Memorial Tournament at Chris Tsiotos Court Thursday afternoon.

The tournament was established in honor of David Green, a former Massachusetts state trooper and Winthrop native who was killed in a shooting in Winthrop back in July.

Shea Lynch, who was named the Tournament MVP, finished the game with 18 points and eight rebounds to lead the Tanners. Colin Berube added 12 points and five rebounds to get named to the All-Tournament Team, while Anthony Forte (nine points, four steals), Danny Barrett (eight points) and Nick Soper (seven points) all played well in the win.

“Our biggest strength as a team is that we don’t have to rely on one guy — we can get contributions from five, six or seven guys on any given night,” said Peabody coach Thad Broughton. “When we can get a bunch of guys going on offense and then play defense like we did (Thursday), we’ll be in good shape.”

“We played well in spurts, but on the whole we simply made too many mistakes to stay in this game,” said Winthrop coach Mike Triant. “Give a lot of credit to Thad and Peabody, they run that pressure defense really well and it causes problems.”

The Tanners got off to a solid start in this one, jumping ahead 7-2 in the opening minutes. But Winthrop battled right back to within one point behind an 8-3 rally, making it a game again by the end of the first quarter.

In the second, Peabody started to get its defensive legs. A number of steals and quick transition baskets helped the Tanners extend their lead, and by halftime they held a 30-21 advantage.

But the third quarter is where the game was won for Peabody. The Tanners got explosive play from Lynch, Berube and Forte, with Peabody scoring 21 points in the quarter and allowing only seven. When the dust settled, the Tanners held a commanding 51-28 lead.

The Vikings did come out with some fight in the fourth quarter, outsourcing Peabody to get back within 20 points. But the Tanners were able to coast home with the easy win and the inaugural David Green Memorial Tournament title.

“We’ve just got to keep working out there,” said Triant. “We still have issues at times with turnovers and scoring, but there were times (Thursday) where we played our best man-to-man defense in the past two years. So there’s plenty to build on.”

“We started 0-2 and now we’ve won four straight, so we’re definitely starting to play better,” said Broughton. “But I think the best thing is that we still have plenty of room to improve, so we’re just going to keep working and trying to get better each day.”

Triant especially wanted to thank the Winthrop High staff for their support in getting the tournament off the ground this year and for helping establish a new tradition in the city.

“I thought it was a great start to an annual tradition and a great way to honor a local man who gave his life for the community,” said Triant.