Hundreds of homes burned from Marshall Fire in Boulder County 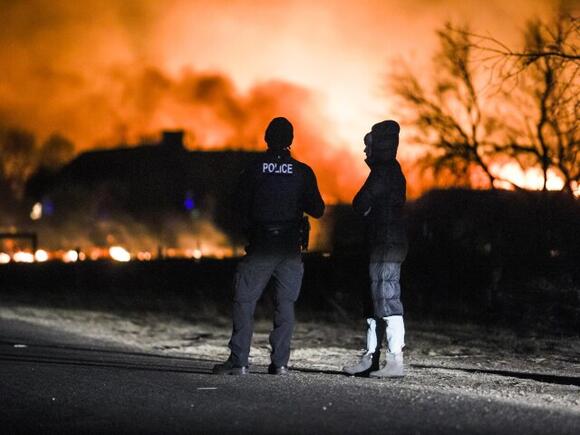 DENVER – Hundreds of homes were feared burned in Boulder County after hurricane-force winds fueled the growth of a grass fire that eventually exploded to 1,600 acres in size, shutting down roads and forcing thousands of people to evacuate Thursday.

“We know that there are structures – both homes and businesses that have been lost – hundreds of structures,” said Joe Pelle, the Boulder County Sheriff, as he provided an update Thursday afternoon on the Marshall Fire, which started around S. Cherryvale Road and Marshall Drive at around 11 a.m.

Initial figures from the Boulder County Sheriff’s Office estimate about 580 homes have so far been lost due to the blaze which has spread east to Superior and Louisville. The breakdown of those losses is as follows:

While only one small injury to an officer has been officially confirmed, Pelle said the department would not be surprised if there are more injuries or eventual causalities from the blaze.

UCHealth confirmed earlier in the day it had received six patients at their Broomfield hospital in connection to these fires, but their conditions were unknown.

Conditions were still volatile and unsafe for residents, Pelle said during the news briefing at around 5 p.m. Thursday, and he urged people placed under pre-evacuation to evacuate anyway as 110 mph wind gusts were moving the fire through a football field of land in a matter of seconds, he said.

“The eyes of the nation and from Colorado turn to Boulder County where at least a 1,600-acre fire has destroyed hundreds of homes,” Gov. Jared Polis said during the news conference. “For those who’ve lost everything that they have, know that we will be there for you to rebuild your lives in the state of Colorado.”

Polis said the Marshall Fire, which is believed to have ignited from downed power lines, was in and around suburban developments, so a 1,600-acre blaze can be – and is – devastating for people living in the area, but said there was no way to quantify in any financial way the personal loss people would feel once they were allowed to return.

Polis called on Coloradans to reach out and lend a hand to the thousands affected by the fire, which he called "a force of nature."

Evacuees with large animals were asked to go to the Boulder County Fairgrounds. People who were COVID-19 positive were asked to go Mount Calvary Lutheran Church, located at 3485 Stanford Ct. in Boulder.

At least one hospital and many healthcare facilities have been evacuated, officials said. Evacuated residents who had family or friends in area hospitals were asked to contact those hospitals to check on their status.

“The end won’t come until the wind subsides,” said Pelle as he talked about how difficult it was for firefighters to battle this wildfire. “This is a type of fire you can’t fight head on. All they can try to do is protect the next structure (in front of them). We hope the winds subside and we hope firefighters get ahead of a fire.”

Pelle said the weather looks much more favorable for firefighting on Friday and winds will die down, so crews will have a chance to contain it.

This is still an evolving, developing situation. For the latest updates, click here .

Around 100 Spanish-speaking migrants arrived by bus in Denver Monday night and now the city is working to accommodate them at an undisclosed shelter, according to the City and County of Denver.
DENVER, CO・1 DAY AGO
Denver7 News KMGH

More firearms are being used in murders in Colorado

Are you dreaming of a white Christmas, Denver? Here’s the bad news

Waking up on Christmas morning to a fresh powder of snow is the hope for many in Denver. But sadly, those hopes are dashed more often than not.
DENVER, CO・20 HOURS AGO
Denver7 News KMGH

Arapahoe County authorities are seeking a man they are calling a person of interest in connection with a suspicious death at an extended stay hotel in Centennial.
ARAPAHOE COUNTY, CO・16 HOURS AGO
Denver7 News KMGH

Following the ribbon-cutting for a 4-acre cover park over a section of I-70 in Denver’s Globeville neighborhood, local activists are speaking out about the parks lack of real greens space.
DENVER, CO・14 HOURS AGO
Denver7 News KMGH

It will be another fairly mild day on the plains, with highs in the mid- to upper 40s. We'll see sunny skies and gustier winds along the Front Range this afternoon.
DENVER, CO・3 HOURS AGO
Denver7 News KMGH

A grandmother with dementia and her 2-year-old granddaughter who both went missing Tuesday afternoon were found safe, Aurora police announced at 6:51 p.m. Tuesday.
AURORA, CO・1 DAY AGO
Denver7 News KMGH

Denver's parks are a source of solitude for so many, but the Denver auditor says the parks and recreation department can do better in making improvements.
DENVER, CO・1 DAY AGO
Denver7 News KMGH

One woman killed, another critically injured in Denver stabbing

One woman was killed and another was critically injured in a stabbing in Denver Wednesday morning, the Denver Police Department announced.
DENVER, CO・10 HOURS AGO
Denver7 News KMGH

The nonprofit Intercambio is looking for volunteers who can teach English simply by engaging in conversations with students
BOULDER, CO・1 DAY AGO
Denver7 News KMGH

A Walgreens employee is being recognized by the Wheat Ridge Police Department for her quick actions on Sunday that saved a dog from a probable strangulation death.
WHEAT RIDGE, CO・19 HOURS AGO
Denver7 News KMGH

Up For Growth, an organization that studies the housing shortage through data-driven research, recently published an analysis that examines the converting Denver office space to residential housing.
DENVER, CO・1 DAY AGO
Denver7 News KMGH

Over $53 million raised by 100,000 donors for nonprofits on Colorado Gives Day

Denver police are investigating unconfirmed reports of an active shooter at Northfield High School and say as of now, there is no evidence of any threats.
DENVER, CO・22 HOURS AGO
Denver7 News KMGH

snow possible across all of Colorado starting Monday night

More snow for the mountains, but dry in Denver. Quiet weather through the weekend. A stronger storm next week.
DENVER, CO・1 DAY AGO
Denver7 News KMGH

A Pueblo man faces multiple charges after he allegedly kidnapped a woman and child, crashed into a Colorado Springs police vehicle, and fled from authorities on I-25 Tuesday.
PUEBLO, CO・20 HOURS AGO
Denver7 News KMGH

Hundreds of people whose homes were damaged or destroyed by the Marshall Fire last year gathered for a holiday extravaganza as the one-year anniversary of the fire approaches.
BROOMFIELD, CO・4 DAYS AGO
Denver7 News KMGH

Family pleads for answers in Denver drive-by that killed grandfather

A family's hope is waning after a year has passed with no answers as to who opened fire at a birthday party, killing their loved one.
DENVER, CO・2 DAYS AGO
Denver7 News KMGH

A man was arrested after he allegedly burglarized at least six businesses in Jefferson County, according to the sheriff's office.
JEFFERSON COUNTY, CO・2 DAYS AGO