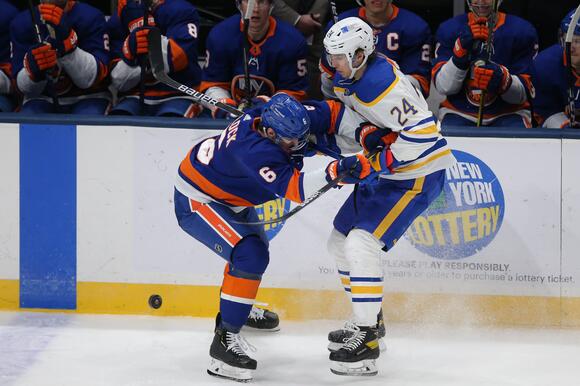 The Buffalo Sabres are meeting the New York Islanders for the first time in the 2021-22 season. The Isles have moved into a new arena since the team's last matchup, and inside it the Sabres are hoping to rebound from a 4-3 loss to the New Jersey Devils last night in Buffalo.

The game stayed tied into the middle stanza before the Islanders pulled ahead. Thanks to goals from forward Kieffer Bellows and captain Anders Lee on a powerplay, the home team carried a 3-1 edge into the third period of play.

The Buffalo Sabres host the St. Louis Blues on Wednesday night, and will be wearing their black and red “goathead” third jerseys for the first time this season. Paul Hamilton provides his game preview:
BUFFALO, NY・2 DAYS AGO