Vince Dooley says Michigan's "style is our style in a lot of ways too." 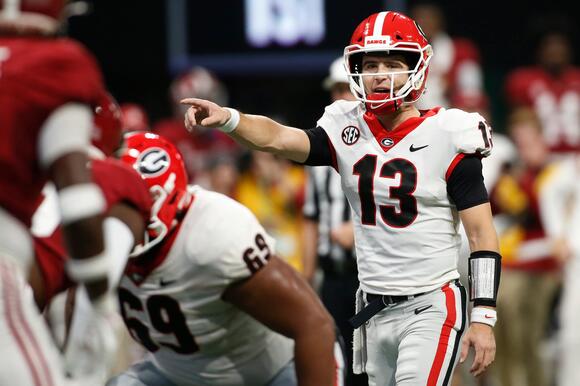 The Georgia Bulldogs and Michigan Wolverines have won games in similar ways this season, and that is imposing their will on their opponent, running the ball effectively, sacking the quarterback, and creating turnovers on defense. Coach Dooley echoes this sentiment by saying “Their style is our style in a lot of ways too.” The Georgia Bulldogs have been the best defense in the nation on paper and on the field this season, but Michigan defensively is also no slouch. The Wolverines have two potential top fifteen picks on the defensive line with Heisman finalist Aidan Hutchinson and David Ojabo, and the two have combined for twenty-five of Michigan’s thirty-four sacks this season. The Wolverines’ defense is also very opportunistic as they are tied for fourth in the nation in scoring defense, but Georgia’s defense was number one in the nation in that statistic this year, so behind Jordan Davis, Nakobi Dean, Lewis Cine, and company the Dawgs make their fair share of big plays on defense as well. Coach Dooley doesn’t take this Michigan team lightly saying they are a “hard nose bunch offensively and defensively.” Offensively, Michigan goes as the run game goes just like the Georgia Bulldogs. The Wolverines are led by the dynamic running back duo of Hassan Haskins and Blake Corum. Haskins led Michigan in rush yards this season with 1,288 yards in 261 attempts, but Corum wasn’t too far behind with 939 yards in 141 attempts. Of course Georgia’s rushing game is led by two dynamic running backs as well in Zamir White and James Cook. White led the Dawgs in rushing this year with 718 yards in 135 attempts, but Cook was a close second with 619 yards in 101 attempts. It will be imperative for both teams to get the run game going, so that means whichever offensive line can hold off the opposing team's very good defensive line will most likely be in good shape to win this game. Brian Noe, who was filling in for Carl Dukes, asked Coach Dooley if he has more confidence in Michigan’s running game or Georgia’s rush defense, and Coach Dooley responded by saying “Both are good.”, so that should tell you what kind of matchup we are in for when it comes to the trenches.

Georgia can throw the ball around a little bit as well if needed, Georgia Pickens is back, and depending on how healthy he is feeling, the 6’3 receiver out of Hoover Alabama could be a real problem for the back end of the Wolverines defense that will most likely be missing starting safety Daxton Hill. However, Pickens won’t be the only problem for Michigan defensive backs, Georgia’s standout freshman tight end will be a matchup nightmare for the Wolverines back end. Bowers moves very well for a 6’4 230 pound tight end, and Vince Dooley told Mike and Brian the same thing saying “He doesn’t look like he’s running as fast as he’s running, he’s got the most deceptive speed.”, so Brock Bowers could very well be an x-factor in this game, and a lifeline for Georgia’s starting quarterback Stetson Bennett.

While this game is going to be won in the trenches, quarterbacks Stetson Bennett and Cade McNamara will have to make big plays if they want to get their teams to this year’s National Championship game. Legendary former Georgia Head Football Coach Vince Dooley knows it will be a good game, but I think his pick as far as a winner goes is obvious saying “After what happened to us in the last ball game, I think we’ll be ready.” The world will find out tomorrow which team is ready, and if Georgia or Michigan will be heading to this year’s National Championship game.

Thomson "found a way" for win and semifinals berth

After surviving a late South Atlanta surge, the Thomson Bulldogs pulled away for a 56-38 win behind a five touchdown night by Jontavius Curry and advanced to the GHSA 2A semifinals.
THOMSON, GA・2 DAYS AGO