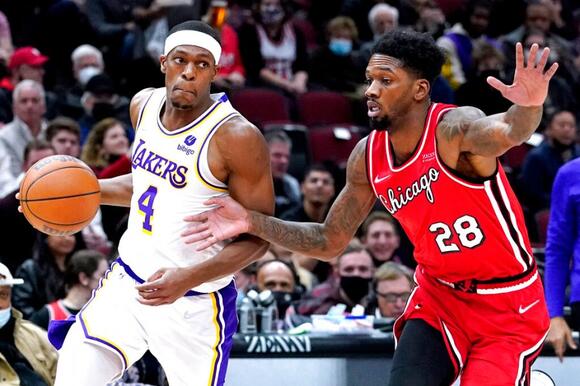 CLEVELAND (AP) — The Cavaliers have made progress in talks with the Los Angeles Lakers about a trade involving veteran point guard Rajon Rondo, a person familiar with the potential deal told The Associated Press on Thursday.

Cleveland has been urgently looking for an experienced guard since Ricky Rubio suffered a season-ending knee injury Tuesday night.

The Cavs and Lakers are “trending” toward completing the trade, said the person spoke on condition of anonymity because the teams have not yet reached an agreement.

It’s not yet known if Cleveland will include any players in a trade. The Cavs will have to clear a roster spot to make room for Rondo.

The Athletic was first to report the potential swap.

Rondo is in his first season with the Lakers, who are just 17-19 and have struggled with one of the NBA’s older rosters. In a reserve role, the 35-year-old is averaging 3.1 points and 3.7 assists in 18 games.

A four-time All-Star, Rondo has been in health and safety protocols since late last week. He would need to be cleared before joining the Cavs, who are home for games against Atlanta on Friday and Indiana on Sunday.

Rondo is under contract for this season at $2.6 million, and the Cavs have a trade exception that could absorb his salary.

At 20-14 going into Thursday’s game at Washington, the Cavs have been one of the league’s biggest surprises and want to keep their momentum going.

They’re desperate to find a proven guard after Rubio, who had a major impact on Cleveland’s early season turnaround, tore his left anterior cruciate ligament against New Orleans. Rubio also tore his left ACL as a rookie in 2012.

Cavs reserve guard Kevin Pangos made his first career start against the Wizards.

Rubio had a positive effect on Cleveland’s young players, especially guard Darius Garland, who is currently in health and safety protocols.

The Cavs are hoping Rondo, who is in his 18th season and has plenty of playoff credentials, could provide some of the same leadership and playmaking as they got from Rubio

Giannis Antetokounmpo scored 38 points and the Milwaukee Bucks capitalized on a 23-2 run in the first eight-plus minutes of the third quarter to rally past the Cleveland Cavaliers 117-102 on Friday night.
MILWAUKEE, WI・2 DAYS AGO
WJW FOX 8 News Cleveland

Cavaliers come from behind to beat Pistons 102-94

Woman gives birth at McDonald’s, and her baby girl is fittingly nicknamed

Here are some details about those who were lost:
CHESAPEAKE, VA・3 DAYS AGO
WJW FOX 8 News Cleveland

A Russian roulette game reportedly led to the death of a 12-year-old in Jackson.
JACKSON, MS・1 DAY AGO
WJW FOX 8 News Cleveland

Adrianna Kiri Taylor was a light in the lives she came across.
CLEVELAND, OH・17 HOURS AGO
WJW FOX 8 News Cleveland

The family of Ayana Barkley considers every step she takes a miracle.
CLEVELAND, OH・3 DAYS AGO
WJW FOX 8 News Cleveland

1 taken to hospital after car was found in Lake Erie, Mentor

A person is being hospitalized after their car was discovered in Lake Erie Friday morning.
MENTOR, OH・3 DAYS AGO
WJW FOX 8 News Cleveland

A 24-year-old man has died after being shot in Cleveland Thursday.
CLEVELAND, OH・8 HOURS AGO
WJW FOX 8 News Cleveland

The youngest victim of the shooting at a Walmart in Chesapeake, Virginia, on Tuesday was a 16-year-old employee, authorities announced.
CHESAPEAKE, VA・2 DAYS AGO
WJW FOX 8 News Cleveland

The Cleveland Division of Police continues to investigate how someone broke into FirstEnergy Stadium and drove a pickup truck across the Browns’ field.
CLEVELAND, OH・3 DAYS AGO
WJW FOX 8 News Cleveland

The highly anticipated matchup between No. 2 Ohio State and No. 3 Michigan with much at stake is almost here.
ANN ARBOR, MI・3 DAYS AGO
WJW FOX 8 News Cleveland

In preparation for the Ohio State Buckeyes vs. Michigan Wolverines match set to kick off at noon on Saturday, newborns at The Ohio State University Wexner Medical Center are wrapped in Beat Michigan swaddles.
COLUMBUS, OH・3 DAYS AGO
WJW FOX 8 News Cleveland

Browns CB Newsome II out against Buccaneers with concussion

Johnny Tetrick's loved ones, his fellow firefighters and members of the public are expected to say farewell to the beloved father and tireless public servant on Saturday.
CLEVELAND, OH・2 DAYS AGO