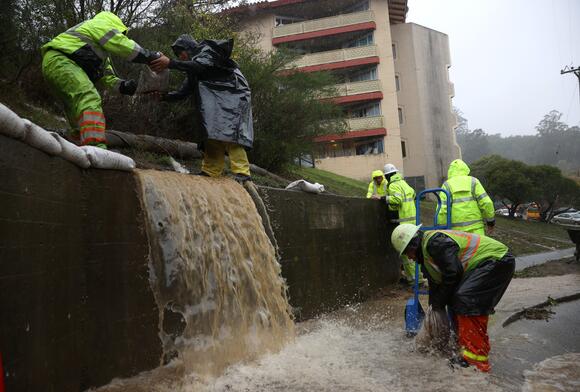 California Gov. Gavin Newsom has declared a state of emergency in four Bay Area counties following a number of storms that have drenched or snowed in much of the state this month.

Newsom announced the declaration on Thursday night, a day after the department of transportation urged drivers to avoid traveling to the Sierra Nevada following record snowfall that forced the closure of numerous roads and highways. Steve Sisolak, Newsom’s counterpart in Nevada, declared a state of emergency around Lake Tahoe following the storm.

A married couple was found dead in Millbrae a week ago Thursday. They were submerged in their car at Hemlock Avenue and East Hillcrest Boulevard, underneath the Caltrain tracks.

The National Weather Service Bay Area on Thursday issued a coastal flood advisory, with Santa Rosa, Napa, San Rafael, Oakland and Fremont included in it. While the Bay Area is expected to ring in the new year without rain, the forecast gets wetter on Monday.

Under Newsom’s order, affected counties can access resources under the California Disaster Assistance Act and Caltrans will request immediate federal assistance for highway repairs and reconstruction.

Several warming centers will be open through Sunday in the Bay Area, as the region prepares for plunging temperatures this week and weekend.
SANTA CLARA COUNTY, CA・10 HOURS AGO
KCBS News Radio

Two days after the world’s largest active volcano began spewing lava for the first time in nearly 40 years, residents of Hawaii’s Big Island are searching for some kind of normalcy to their daily routine.
SAN FRANCISCO, CA・9 HOURS AGO
KCBS News Radio

How to keep economy open while staying COVID-19 safe

In order to keep the economy open while protecting against COVID-19 this winter, some health experts believe the indoor mask mandate should be reinstated.
SAN FRANCISCO, CA・5 HOURS AGO
KCBS News Radio

It’s the season of giving, and if you plan on making a charitable contribution, this is the perfect day to do so — Giving Tuesday, Bay Area nonprofits encourage.
SAN FRANCISCO, CA・4 HOURS AGO
KCBS News Radio

Watch out for weather systems that may derail your travel plans

As families and friends wrap up their Thanksgiving celebrations this weekend, the National Weather service alerted travelers across the country about weather systems that may interrupt their travel plans.
LOUISIANA STATE・3 DAYS AGO
KCBS News Radio

SF Board of Supervisors debates allowing police to use armed robots

The San Francisco Board of Supervisors is debating a policy that could allow for armed robots that are capable of using lethal force to aid in last-resort situations.
SAN FRANCISCO, CA・8 HOURS AGO
KCBS News Radio

Thanksgiving is over and has ushered in “Cyber Monday.” While some might be planning on doing their holiday shopping online, Bay Area police departments are reminding in-person shoppers to take precautions this holiday season.
OAKLAND, CA・1 DAY AGO
KCBS News Radio

The current city council members will need to choose how to fill the vacancies – by either holding new elections or simply appointing replacements.
SAN JOSE, CA・1 DAY AGO
KCBS News Radio

Why crab fishing continues to be delayed in Bay Area

If you’re planning on eating crab this Thanksgiving, you may need to think again as the commercial crab season has once again been delayed.
7 DAYS AGO
KCBS News Radio

Ahead of Cyber Monday, Amazon has opened its first same-day delivery facility in the Bay Area. The sprawling warehouse is located in Richmond near Point Pinole.
RICHMOND, CA・6 DAYS AGO
KCBS News Radio

San Francisco cracks down on illegal electric scooter use

San Francisco city leaders are sending a message to electric scooter companies: “play nice” or “get out.” One of the city’s biggest providers is eager to comply.
SAN FRANCISCO, CA・6 DAYS AGO
KCBS News Radio

Apple Inc. is facing mounting pressure to protect the reproductive health information of users in the wake of the Supreme Court overturning of Roe vs. Wade.
CALIFORNIA STATE・1 DAY AGO
KCBS News Radio

Planning your Thanksgiving meal without a side of COVID-19

As Thanksgiving approaches, concerns are on the rise of how to enjoy a family gathering while lowering the risk for COVID-19. To answer your questions, KCBS Radio’s Melissa Culross spoke with Dr. Amesh Adalja.
SAN FRANCISCO, CA・7 DAYS AGO
KCBS News Radio

Newsom to release $1 billion in homelessness funding after brief hold

Gov. Gavin Newsom is set to release about $1 billion in homelessness funding, reversing a decision to put that spending on pause after meeting with 100 local officials.
CALIFORNIA STATE・8 DAYS AGO
KCBS News Radio

'Not too late' for COVID boosters to secure your holiday immunity

We are all looking for ways to stay COVID-free while gathering with friends and family this Thanksgiving. To answer your questions on how to best protect yourself and others, KCBS Radio spoke with Dr. Peter Chin-Hong.
SAN FRANCISCO, CA・6 DAYS AGO
KCBS News Radio

In a race that came down to a few hundred votes, Sheng Thao has been declared as Oakland’s next mayor. The 37-year-old progressive edged out City Councilmember Loren Taylor by a razor thin 682 votes.
OAKLAND, CA・7 DAYS AGO
KCBS News Radio

People should stay cautious about COVID-19 amidst Thanksgiving celebrations

As Thanksgiving approaches and the holiday season kicks off in earnest, people need to start planning ahead to stay COVID-19-safe, including testing and ventilation.
SAN FRANCISCO, CA・8 DAYS AGO
KCBS News Radio

There are reports of further layoffs as Twitter reopens its San Francisco offices after a three-day shutdown, of which only the software engineers were excluded.
SAN FRANCISCO, CA・8 DAYS AGO