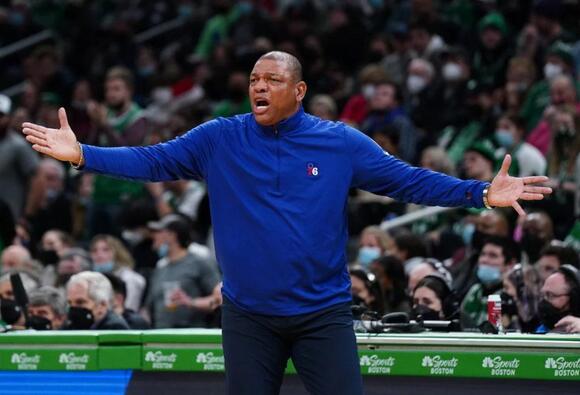 Sixers guards Tyler Johnson and Myles Powell and assistant coaches Brian Adams and Sam Cassell also entered the protocol on Thursday. They join forward Danny Green on the list for the 76ers, who turned to assistant coach Dan Burke to guide the club in Thursday’s game against the host Brooklyn Nets.

Assistant David Adelman was due to serve as the acting head coach for the Nuggets on Thursday had they played against the visiting Golden State Warriors as scheduled, but the game was postponed when Denver couldn’t field a roster of eight players.

Johnson, 29, has averaged 3.7 points in three games this season for the 76ers.

Powell, 24, has chipped in an average of 1.5 points in two games off the bench for Philadelphia.

Hyland, 21, has played in 24 games on the season for the Nuggets, averaging 8.5 points.

LeBron James 'disappointed' by lack of questions about 1957 Jerry Jones photo, says media was 'quick to ask' about Kyrie Irving

Addressing reporters during his postgame news conference Wednesday, LeBron James wondered why he has not been asked about the 1957 photo of Cowboys owner Jerry Jones that recently surfaced, after the media was so quick to question him about Kyrie Irving.
LOS ANGELES, CA・8 MINUTES AGO
Sportsnaut

Kemba Walker is set to join the Dallas Mavericks on a one-year deal, pending a physical. Walker, 31, will take
DALLAS, TX・2 DAYS AGO
Sportsnaut

The Los Angeles Lakers will have to pick up the pieces Wednesday night when they host the Portland Trail Blazers
LOS ANGELES, CA・20 HOURS AGO
Sportsnaut

The Houston Astros, fresh off winning their second World Series title, have made a big free agency signing aimed at
HOUSTON, TX・2 DAYS AGO
Sportsnaut

Kevin Durant scored 39 points and the Brooklyn Nets moved over the .500 mark for the first time this season
BROOKLYN, NY・6 HOURS AGO
Sportsnaut

Rookie Jalen Williams had a season-high 27 points as the Oklahoma City Thunder overcame a 20-point deficit to beat the
OKLAHOMA CITY, OK・6 HOURS AGO
Sportsnaut

The Philadelphia Phillies have reportedly jumped to the front of the pack to acquire a two-time All-Star and one of
PHILADELPHIA, PA・18 HOURS AGO
Sportsnaut

Philadelphia Eagles starting safety CJ Gardner-Johnson is having the best season of his four-year career, however, that could be halted
PHILADELPHIA, PA・1 DAY AGO
Sportsnaut

As Daniel Snyder evaluates a potential sale of the Washington Commanders, many in the NFL are watching closely to see
HOUSTON, TX・2 DAYS AGO
Sportsnaut

One of the more intriguing matchups of the Big East-Big 12 Battle will pit No. 9 Kansas, the defending national
SOUTH ORANGE, NJ・14 HOURS AGO
Sportsnaut

Kings looking for less chaos as they host Coyotes

If it seems like every goal Alex Ovechkin scores this season has historical significance, perhaps that’s because it does. Ovechkin
SEATTLE, WA・9 HOURS AGO
Sportsnaut

It’s never too early to dive into our 2023 NBA mock draft. With the 2022-’23 season now ongoing and the
ALABAMA STATE・11 HOURS AGO
Sportsnaut

Aside from one year lost to suspension due to Bountygate, Sean Payton has been an NFL head coach for each
ARIZONA STATE・2 DAYS AGO
Sportsnaut

A hot offense will get the ultimate test when it meets one of the best defenses in the NFL as
MIAMI, FL・4 HOURS AGO
Sportsnaut

No. 8 UConn aims to stand tall over Oklahoma State

If history does in fact repeat itself, No. 8 UConn will feel pretty good about its long-term goals for the
STILLWATER, OK・15 HOURS AGO
Sportsnaut

Both the New York Jets and Minnesota Vikings have a lot of similarities going into their first meeting in three
MINNEAPOLIS, MN・8 HOURS AGO