PG&E: Could take another week for power to return to some in the Sierra 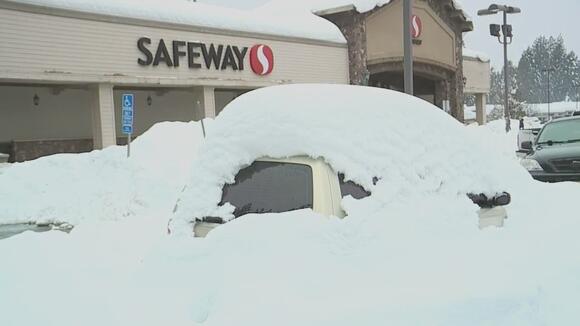 As of Friday, 38,531 customers in the Sierra are still without power, according to a spokesperson from PG&E.

EL DORADO COUNTY, Calif. (KTXL) — Following the latest round of winter snowstorms, tens of thousands of people were still without power Thursday night and Pacific Gas and Electric said it could be another week before some residents can get power again.

Gov. Gavin Newsom has declared an emergency proclamation to support counties slowly recovering from the winter conditions. Several of those counties have already declared their own emergencies in response to the record-breaking snowfall.

At last check, PG&E said 42,437 customers in the Sierra are without power.

As the weather cleared and the sun came out, a lot of people in El Dorado County took the opportunity to get out and clean up the snow and damage, as well as stock up on supplies.

“The gas station ran out of gas, that was tough. We had to travel to Placerville, took us three hours to get back home,” Langford said.

Some residents told FOX40 Thursday was their fourth day without power.

They’ve been relying on generators and stopping at community centers to charge electronic devices. Neighbors have been helping neighbors as resources quickly run out.

“Got no central heating going on, actually got no power, so all you’ve got is a fireplace and a generator. And all your generator is going to do is help with your refrigerator and stuff, that’s about it,” one local man said. “So, I don’t know what we’re going to do. If it’s going to go past the 10s, you’re going to see a lot of people, you know, probably a few dead ones, too, from freezing to death.”

The National Weather Service reported the “coldest air in nearly five years” is expected to hit western Nevada and some Sierra communities by the end of the week and into the new year. NWS officials said the lowest temperatures in the Sierra could drop down to below zero.

PG&E crews have been struggling to get around snow to get to damaged equipment. The utility gave Pollock Pines an initial estimate of Jan. 10 for when power could come back on but said all estimates “are likely to change.”

Leaders with PG&E will hold a press conference Friday morning to provide updates on the efforts to restore power.

And power hasn’t been the only issue.

Gas stations have been running low on fuel, which means drivers heading to the mountains should fill up in the valley first.

Major canals in Placer and Tuolumne counties were also damaged in the storms.

As communities conserve water, they can pick up bottled water at the Applegate Fire Station at 18016 Applegate Road, the Placer Hills Fire Station at 100 West Weimar Cross Road, and the Weimar Country Store and Gas at 20170 West Paoli Lane.

For those impacted by the snowstorms, click or tap on your county to find more information on resources that are available.

Chain controls in the Sierra Nevada: This is what you should do when they are established

(KTXL) — With a winter storm expected across the Sierra Nevada mountain range Thursday and potentially into the weekend, many drivers in the area will have to put chain controls on their vehicles. According to Caltrans, when drivers need chain controls they will be reminded through signs along roadways warning of an upcoming chain control […]
CALIFORNIA STATE・1 DAY AGO
FOX40

Sacramento housing market continues to draw people to the city

SACRAMENTO, Calif. (KTXL) — The housing market is cooling off nationwide, but real estate experts say the market in Sacramento is still warm. In fact, new data lists Sacramento as the top metro area in the country that people are looking to move to. One couple FOX40 spoke to moved from Manhattan to Midtown Sacramento. […]
SACRAMENTO, CA・14 HOURS AGO
FOX40

How likely is Northern California to experience a volcano eruption

CALIFORNIA, (KTXL) — Northern California is home to four volcano’s all of which have a threat ranking of high to very high by the United States Geological Survey (USGS), but what does that mean for the security of the communities around them? The four volcanos are Mount Shasta (220 miles north of Sacramento), Medicine Lake […]
CALIFORNIA STATE・1 DAY AGO
FOX40

SACRAMENTO, Calif. (KTXL) — Near-freezing temperatures are expected throughout the Sacramento area this week. According to the National Weather Service, while no rain or snow is forecasted, near to below-freezing temperatures are expected both Tuesday and Wednesday morning. According to the FOX40 Weather Center, the overnight low on Tuesday is expected to drop to 32 […]
SACRAMENTO, CA・1 DAY AGO
FOX40

Warming centers to be activated as cold temperatures hit Sacramento

SACRAMENTO, Calif. (KTXL) — The California International Marathon will be taking place through the Sacramento area, closing several roads throughout the morning and afternoon on Sunday, Dec. 4. The race will begin at the Folsom Dam and continue through the streets of Orangevale, Fair Oaks, Carmichael and Sacramento, ending at the state Capitol building. The […]
SACRAMENTO, CA・2 DAYS AGO
FOX40

(KTXL) — An avalanche watch has been issued for areas of the Sierra Nevada near Lake Tahoe due to heavy snow and wind expected over the coming days, according to the Sierra Avalanche Center and the National Weather Service’s Reno office. The NWS said that the warning will be in effect from Thursday, Dec. 1, […]
1 DAY AGO
FOX40

In the holiday spirit? Here are holiday-themed events across the Sacramento region

SACRAMENTO, Calif. (KTXL) — The holidays are upon us, and for those who are in the spirit of the season, multiple events are happening throughout the Sacramento area.  Tree lightings There are different holiday-themed trees throughout the Sacramento area with some scheduled to light up sometime in early December.  The holiday tree at the Old […]
SACRAMENTO, CA・1 DAY AGO
FOX40

Sacramento woman’s ashes to be launched into outer space

(KTXL) — A rocket launching from New Mexico will be taking the ashes of a Sacramento woman into space on Wednesday as part of a memorial.  Sy Vang, 43, died in November of 2020 from complications from ovarian cancer. She was active in the community and helped lead fundraisers that helped families in need. She […]
SACRAMENTO, CA・1 DAY AGO
FOX40

SACRAMENTO, Calif. (KTXL) — California students are back in school for the first time since their Thanksgiving break, but not all of them have teachers at the front of the class. New data from an education research firm shows California ranks as one of the top states with the worst teacher shortage. One teacher in […]
SACRAMENTO, CA・2 DAYS AGO
FOX40

(KTXL) — One person was arrested after driving the wrong way down State Route 99 Friday, the California Highway Patrol said. According to CHP, the North Sacramento CHP division received several calls in the early morning hours on Friday about a driver headed south on northbound SR-99 near Elverta Road. CHP said other drivers on […]
RANCHO CORDOVA, CA・1 DAY AGO
FOX40

NEVADA CITY, Calif. (KTXL) — As the iconic fall colors disappear from the trees across Nevada City, the white lights of the historic mining town offer a warm welcome to the holiday season. Nevada City’s Victorian Christmas fills the historic streets with the scent of roasted chestnuts, hot chocolate and the sound of roaming carolers. […]
NEVADA CITY, CA・2 DAYS AGO
FOX40

Downtown Sacramento used to have a lake in the 1800s. Here’s what happened to it

SACRAMENTO, Calif. (KTXL) — People walking in downtown Sacramento near the train station would have once been greeted by a lake that covered several blocks of the city. Originally named Sutter Lake, a map made by a city surveyor, dated 1873, shows the body of water stretching from Front and Sixth streets, between I and […]
SACRAMENTO, CA・5 DAYS AGO
FOX40

Historic sites you can visit while in Sacramento

SACRAMENTO, Calif. (KTXL) — When visiting Sacramento, there are many sites to see that are historic to the city and to California.  Due to Sacramento’s abundance of museums, theaters and parks, the farm-to-fork capital is a destination for visitors and history enthusiasts. Here are some historical sites to visit in Sacramento.  Old Sacramento Waterfront Sacramento’s […]
SACRAMENTO, CA・4 DAYS AGO
FOX40

SACRAMENTO, Calif. — The California Governor’s office has released details about the ceremony for the induction of the newest members of the California Hall of Fame. This will be the 15th class of inductees since the Hall of Fame was established in 2006 to “honor history-making Californians who embody the state’s spirit of innovation,” according […]
CALIFORNIA STATE・23 HOURS AGO
FOX40

CITRUS HEIGHTS, Calif. (KTXL) — A suspect in a series of bank robberies in Sacramento County was arrested Monday, the Citrus Heights Police Department said. According to the police department, John Dean Shultz, 32, was the suspect in the investigation into four bank robberies that took place between Auburn and Citrus Heights. Police said Schultz […]
SACRAMENTO COUNTY, CA・1 DAY AGO
FOX40