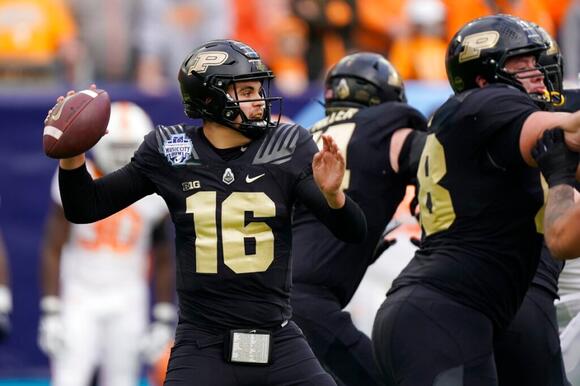 NASHVILLE, Tenn. (AP) — Mitchell Fineran kicked a 39-yard field goal in overtime and Purdue finished off its best season since 2003 by overcoming a 14-point deficit and beating Tennessee 48-45 on Thursday in a record-setting Music City Bowl.

Purdue (9-4) tied for the second-most wins in program history as only the 12th team in the Boilermakers’ 134-year history to win nine games. They also won their fifth game away from home, something they hadn’t done since 1943.

Tennessee (7-6) missed a chance to make Josh Heupel the first Vols coach to cap his debut season with a bowl win since Bill Battle won the 1971 Sugar Bowl. The Vols also snapped a four-game bowl victory streak with a loss that dropped the Southeastern Conference to 1-5 this bowl season.

This high-scoring game featured a flurry of big plays and points in the final five minutes only to see Purdue’s defense make the deciding play.

On the first possession of overtime, Jamar Brown and Kieren Douglas stopped Vols running back Jaylen Wright short on fourth-and-goal at the 1. The stop was upheld on review for Wright’s forward progress being stopped despite Wright reaching the ball over the goal line before the whistle without a knee touching the ground while laying on top of Douglas.

After Purdue ran three plays, Fineran sealed the victory with his fourth field goal of the game, sending the Boilermakers running down the field in celebration.

The end of regulation featured Purdue quarterback Aidan O’Connell throwing two of his five TD passes, starting with a pass Payne Durham took 62 yards after breaking a tackle in front of the Purdue bench.

Hendon Hooker threw two of his five TDs tying it up at 38 with a 13-yarder to Cedric Tillman on fourth-and-goal from the Purdue 13, then again at 45. The Vols had a final chance to win in regulation, but Chase McGrath’s 56 yard field goal fell well short.

Tennessee finished with 639 yards total offense and Purdue had 623 in regulation — both bowl records before overtime. O’Connell easily set the mark with 534 yards passing, well above the 383 Mike Glennon had with N.C. State.

Purdue came in without All-America wide receiver David Bell, who’s prepping for the NFL draft, and a receiving corps further thinned by injuries. Broc Thompson filled in with seven catches for a game-high 217 yards and two TDs.

The Boilermakers had a chance to keep this finish from being quite so exciting. But they settled for three field goals in the second quarter and only led 23-21 at halftime.

Hooker finished with 378 yards passing. Tillman had three touchdowns on seven receptions for 150 yards, and Jabari Small ran for 180 yards.

Purdue: Coach Jeff Brohm said his Boilermakers had a lot of wide receivers, and they tapped that depth in this game. O’Connell spread the ball around connecting with nine different receivers.

Tennessee is set up nicely for 2022. Tillman, who came into this season with eight career catches, finished with the Vols’ first 1,000-yard season since 2012. He’s already announced he’s returning next season along with Hooker, tight ends Jacob Warren and Princeton Fant and a handful of other Vols.

Purdue has O’Connell coming back along for 2022, giving Brohm a chance to build on an offense that threw the ball more than any other team in school history.

For the latest news, weather, sports, and streaming video, head to WANE 15.

How Many People are on Death Row in Missouri?

MISSOURI — More than 70% of countries around the world have effectively abolished the death penalty, including all but one European nation. The United States, however, is an outlier, particularly among developed, democratic countries — and across the country, there are more than 2,000 people on death row. Under the Biden administration, the federal government […]
MISSOURI STATE・1 DAY AGO
WANE 15

Mike Braun to run for Indiana governor in 2024

Tracking the Tropics: Lessons learned from the 2022 Atlantic Hurricane season

The last day of November marks the end of hurricane season and although the Atlantic season ended up near average, it was anything but uneventful.
FLORIDA STATE・1 DAY AGO
WANE 15

Actor Clarence Gilyard Jr., known for roles in such movies as "Die Hard" and television hits such as "Walker, Texas Ranger," has died.
LAS VEGAS, NV・2 DAYS AGO
WANE 15

‘I fought a shark and won’: 10-year-old fends off shark at Florida beach

A 10-year-old girl is staying positive after she fended off a shark during an encounter at a Florida beach.
FLORIDA STATE・1 DAY AGO
WANE 15

The Rock rights his wrong at Hawaii 7-Eleven store

Recently Dwayne Johnson visited his childhood 7-Eleven store to pay back what he took years ago.
HAWAII STATE・2 DAYS AGO
WANE 15

George Wagner IV found guilty in Rhoden massacre. What is next for his father?

WAVERLY, Ohio (WCMH) — After a jury found George Wagner IV guilty Wednesday on all of the charges he faced in the 2016 Rhoden murders, three of four members of the Wagner family have been convicted. But Ohio Gov. Mike DeWine, at a press conference Wednesday evening said the largest homicide investigation in Ohio’s history, […]
OHIO STATE・3 HOURS AGO
WANE 15

The father of JonBenét Ramsey has sent a letter to Colorado Gov. Jared Polis with a plea to let a private company test the DNA evidence.
COLORADO STATE・9 HOURS AGO
WANE 15

Election certification delays are few, but a ‘test run’ for 2024

Three weeks after the end of voting, such challenges are playing out in just two states.
PENNSYLVANIA STATE・1 DAY AGO
WANE 15

When you think of all the dangerous things that reside in Florida, trees probably don't come to mind, but the state is actually home to the "most dangerous" tree in the world.
FLORIDA STATE・1 DAY AGO
WANE 15

How dangerous is Mauna Loa’s eruption in Hawaii?

Lava is shooting 100 feet to 200 feet into the air as the world's largest active volcano erupts for the first time in nearly 40 years.
HAWAII STATE・2 DAYS AGO