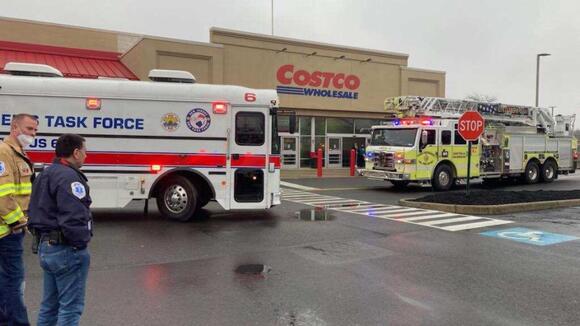 (NEXSTAR) – A Costco in New Jersey was evacuated on Wednesday morning after a refrigerant leak inside the store sickened about 20 people, according to police.

Costco staff contacted police in Hazlet Township with reports of the leak (which police described as a “Freon leak”) at approximately 6:45 a.m. before attempting to ventilate the building and delay its opening, the Hazlet Township Police Department wrote on Facebook . At around 9:30 a.m., the store called back to report approximately 20 people experiencing nausea and headaches.

The store had been evacuated by the time emergency personnel arrived. The Monmouth County EMS Task Force also provided somewhere between 15 and 20 ambulances, according to the Facebook post.

Five of the sickened individuals were ultimately sent to nearby hospital for treatment, a representative for the Hazlet Township Police confirmed to Nexstar.

The Costco location remained closed on Wednesday. A representative for the location confirmed the store had reopened for normal operating hours on Thursday.

Refrigerants, such as Freon, can be dangerous if inhaled, or if they make contact with the skin or eyes in liquid form, according to the CDC’s National Institute for Occupational Safety and Health. Exposure may cause dizziness, tremors, asphyxia, unconsciousness or even cardiac arrhythmias or arrest. Exposure to liquid forms may also cause frostbite.

Hazlet’s Office of Emergency Management was contacted for additional information concerning the specific type of refrigerant involved in Wednesday’s leak, and the status of those sickened.

According to a Declaration of Warrant filed by the Las Vegas Metropolitan Police Department, Oliva's girlfriend, who isn't identified in the paperwork, told police she had invited another man through Facebook Messenger to go with her and Oliva to the park. She said she only knew the man by his moniker. The documents later reveal police learned that the person was 18-year-old, Joshua Steffen.
LAS VEGAS, NV・2 DAYS AGO
8 News Now

Metro police have arrested a man following the discovery of a body in a desert lot in the southeast Las Vegas valley.
LAS VEGAS, NV・3 DAYS AGO
dallasexpress.com

Sam Brinton, deputy assistant secretary of spent nuclear fuel for the U.S. Department of Energy, has been placed on a leave of absence after being charged with a felony for allegedly stealing a woman’s luggage off an airport carousel. Before being hired in June, Brinton, 35, worked for the...
WASHINGTON STATE・1 DAY AGO
8 News Now

LAS VEGAS (KLAS) — A rapper who bragged about getting rich by scamming a COVID relief program in a Youtube video and using stolen identities to obtain money was sentenced to over six years in prison on Wednesday. 8 News Now previously reported that Fontrell Baines, 33, also known as “Nuke Bizzle” was arrested in […]
LAS VEGAS, NV・11 HOURS AGO
8 News Now

A Las Vegas woman accused of her seventh DUI remained in custody Wednesday more than two weeks after a judge set bail at $5,000.
LAS VEGAS, NV・23 HOURS AGO
8 News Now

An 18-year-old man is facing multiple charges, including kidnapping with a deadly weapon, for his involvement in an attempted carjacking in North Las Vegas, police said
NORTH LAS VEGAS, NV・1 DAY AGO
8 News Now

Jack Eichel scored just over a minute into the game as the Golden Knights never relinquished the lead in a 4-1 victory over the Detroit Red Wings on Saturday night.
DETROIT, MI・4 DAYS AGO
BuzzFeed

People on TikTok have claimed that drinking coffee on an empty stomach is causing painful periods, acne, hair loss, and exhaustion. So we spoke to a doctor who rebuffed many of these claims.
11 MINUTES AGO
8 News Now

A Henderson police officer was issued a summons to appear in court for charges relating to a hit-and-run.
HENDERSON, NV・1 DAY AGO
8 News Now

‘God is on my side,’ messages reveal Jan. 6 rioter arrested in Las Vegas assumed he was headed to prison before arrest

A Las Vegas man in custody on charges of shooting at another driver earlier this week was named a suspect in a November murder and was recently released from prison, the 8 News Now Investigators first reported Tuesday.
LAS VEGAS, NV・19 HOURS AGO
8 News Now

LAS VEGAS (KLAS) — Oncologists are hopeful about a new study examining the impacts of staying on breast cancer treatments long term. The doctors are hopeful but measured about the results of the new study. Women diagnosed with estrogen receptor or ER-positive tumors continue to experience breast cancer recurrence and death for as long as […]
LAS VEGAS, NV・1 HOUR AGO
8 News Now

A Las Vegas-area mother is accused of using methamphetamine in her baby daughter’s presence, causing the child to test positive for the drug, police said.
LAS VEGAS, NV・1 DAY AGO
8 News Now

LAS VEGAS (KLAS) — Police have arrested a 27-year-old man accused in a drive-by shooting that left one person dead in the east Las Vegas Valley, the 8 News Now Investigators confirmed Tuesday. Usbaldo Zarate was identified by police as a suspect in the shooting that took place on Nov. 26, in the 4800 block […]
LAS VEGAS, NV・1 DAY AGO
8 News Now

Nevada flu hospitalizations more than doubled toward end of November

Hospitalizations for the flu have more than doubled over the past week in Clark County.
LAS VEGAS, NV・1 DAY AGO