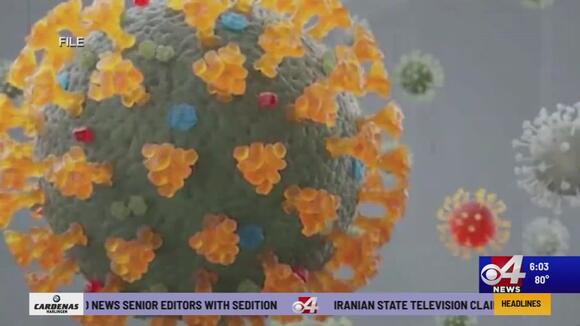 CAMERON COUNTY, Texas (ValleyCentral) — COVID-19 testing is in high demand, and testing centers across the valley are seeing hundreds of people at testing sites such as those in Cameron County.

Rolando Casas, Cameron County’s assistant emergency management coordinator, said they have seen 894 Cameron County residents over the past two days between both their sites.

“The numbers are a lot higher than expected of the turnout, we weren’t expecting that much of a turnout,” said Casas.

He said they are offering rapid tests and Polymerase Chain Reaction (PCR) tests at their testing sites.

He said that there is a difference in the way the tests are administered.

“The rapid test is the around the rim of the nose, in the interior maybe about a quarter inch in. The PCR test is that other test that we all don’t like to take, the one that goes a lot further into the sinus area,” he explained.

He said it takes a lot of work and a team effort to get their testing centers ready and operational.

“Our commissioners, the staff, sheriff’s office, the constable’s office, everybody plays a part in making the operation run smoothly,” he said.

The staff starts their day by setting up cones, working on the traffic flow, and preparing testing supplies, according to Casas.

He said the workload can be heavy and sometimes breaks are not available, but they are working hard for the community.

“We’re trying to take care of them as well, they’re doing their part to take care of us so we just ask the community to be considerate about that, I know it’s not as fast as they expect,” he said.

Casas explained that long wait times are due to the 15-minute results wait time after testing and said getting to the site before hours of operation is not advised.

“It’s not safe to be out there that early in the morning. We did have a few vehicles stall out there in La Feria,” he said.

Casas said it is important to be mindful when deciding to head out to get tested.

He said additional testing dates are scheduled for next week. For more information on Cameron County Emergency Management and the upcoming testing site dates, visit their Facebook page.

CAMERON COUNTY, Texas (ValleyCentral) — Cameron County Public Health reported 93 new laboratory reports of COVID-19 between Saturday and Wednesday. Of the 93 new cases, 36 were confirmed based on PCR testing, the report stated. In addition to the positive reports, Cameron County also received 57 probable reports based on antigen testing, 27 of which […]
CAMERON COUNTY, TX・3 DAYS AGO
ValleyCentral

PHARR, Texas (ValleyCentral) — Two arrests were made after a deadly hit-and-run that killed a 54-year-old man on Thanksgiving, police said. San Juan resident Manuel Canchola, 19; and Pharr resident Natalie Monique Carreon, 19; turned themselves in to police Saturday, according to a release from the Pharr Police Department. The man was fatally hit by […]
PHARR, TX・9 HOURS AGO
ValleyCentral

PHARR, Texas (ValleyCentral) — A Thanksgiving Day hit-and-run left a 54-year-old man dead in Pharr. The Pharr Police Department said the incident occurred at 10:14 p.m. in the area of Cage Boulevard and Helmer Street. When officers arrived they saw a man lying on the roadway. The officers contacted a witness who said a small dark […]
PHARR, TX・1 DAY AGO
ValleyCentral

Update: Officials are now reporting that water services have been restored to the area. SAN BENITO, Texas (ValleyCentral) — The City of San Benito is reporting a water outage on Business 77. The city said the outage is affecting businesses and residents in the area. City crews are working to repair a water line, said […]
SAN BENITO, TX・1 DAY AGO
ValleyCentral

McAllen’s famed irrigation pipes get splash of color and culture

Artists are painting irrigation pipes throughout the city of McAllen, Texas, with cultural and colorful motifs to represent the Rio Grande Valley on these bland ancient stacks that have been used for decades to channel water from the Rio Grande to farm fields north of the border. Border Report spoke with one artist as she began her project and followed up on Wednesday to view her final artwork.
MCALLEN, TX・1 DAY AGO
ValleyCentral

WESLACO, Texas (ValleyCentral) — A driver died after he crashed into a utility pole early Saturday morning in Weslaco, Weslaco Police Department said. The driver was identified as 39-year-old Hector Rodriguez, who police suspect had lost control of the 2008 black Ford F-250 he was driving before he crashed into a utility pole, according to […]
WESLACO, TX・9 HOURS AGO
ValleyCentral

HARLINGEN, Texas (ValleyCentral) — The office of the Cameron County Tax Assessor-Collector urges taxpayers to take advantage of the discounts available to property owners who pay their taxes early. Payments made in November will receive a 2% discount and payments made in December will receive a 1% discount. This is exclusive to districts that offer […]
CAMERON COUNTY, TX・4 DAYS AGO
ValleyCentral

HARLINGEN, Texas (ValleyCentral) — The suspect in a hit-and-run that left a man injured on the sidewalk was arrested Wednesday, according to the Harlingen Police Department. Arnulfo Alvizo Gutierrez, 55, of Harlingen, was identified by police as the driver they alleged was involved in a hit-and-run Sunday. He is charged with accident involving serious bodily […]
HARLINGEN, TX・3 DAYS AGO
ValleyCentral

Arrest made in months-old stabbing case in Monte Alto

MONTE ALTO, Texas (ValleyCentral) — A man who got into a fight with a friend allegedly brought his brother and father back to the scene of the fight where the three ended up stabbed in January. This week, the suspect has been arrested. On Tuesday, Jayson Omar Perez, 22, was arrested and charged with aggravated […]
MONTE ALTO, TX・2 DAYS AGO
ValleyCentral

EDINBURG, Texas (ValleyCentral) — A man walking around with a rifle shortly after midnight on Thanksgiving was arrested after bullets hit an Edinburg police unit, officials say. Brett Thomas Martinez, 40, of Edinburg, was arrested and police recovered a rifle, after officers used an aircraft drone to spot him in the area, authorities said. Martinez […]
EDINBURG, TX・2 DAYS AGO
ValleyCentral

BPD: Men wanted after brawl, gunfire outside bar on Thanksgiving

BROWNSVILLE, Texas (ValleyCentral) — Police are seeking the identities of multiple men after a physical altercation occurred outside a local bar on Thanksgiving Day, according to the Brownsville Police Department The fight occurred on Thursday night, police said. Video footage shows several men getting to a brawl in a parking lot and security unable to […]
BROWNSVILLE, TX・12 HOURS AGO
ValleyCentral

McALLEN, Texas (ValleyCentral) — Authorities are investigating a fatal trailer park fire Tuesday that left one person dead. The fire took place Tuesday evening at 400 N. McColl Rd. in McAllen. McAllen Fire Chief Jim Schultz told ValleyCentral that one man has died as a result of the fire. The cause of the trailer park […]
MCALLEN, TX・4 DAYS AGO
ValleyCentral

CCSO: Man arrested near Brownsville with 48 pounds of marijuana

CAMERON COUNTY, Texas (ValleyCentral) — Many people are taking advantage of holiday deals right now but experts are warning about “porch pirates” preying on your purchases. “These individuals are opportunists. They prey on people’s property especially when they’re not at home,” Rancho Viejo Police Department Sgt. Arturo Huerta said. Huerta explained that there are steps […]
RANCHO VIEJO, TX・1 DAY AGO
ValleyCentral

McALLEN, Texas (ValleyCentral) — Authorities are investigating a fatal trailer park fire Tuesday that left one person dead. McAllen Assistant Fire Chief Juan Gloria told ValleyCentral that one man has died as a result of the fire. “As you can see, behind me, this still is a very active scene, we have our fire investigators […]
MCALLEN, TX・4 DAYS AGO
ValleyCentral

MCALLEN, Texas (ValleyCentral) — A McAllen man who was arrested on charges of harassment is accused of telling a judge he would kill her and her family during the magistration process. Eliezer Antonio Gracia was arrested on charges of harassment, harassment of a public servant, criminal mischief, resisting arrest/search/transport and obstruction or retaliation, according to […]
MCALLEN, TX・4 DAYS AGO
ValleyCentral

CBP ‘officers were involved in discharge of a weapon’ in Progreso, officials say

ELSA, Texas (ValleyCentral) — The Elsa Police Department has identified the suspect’s vehicle in connection to the fatal shooting of a teenager last week. “We think we’ve identified the vehicle that was involved but we’re not releasing the information on that yet,” Elsa Police Chief Robert McGinnis told ValleyCentral on Wednesday. Additionally, McGinnis said that […]
ELSA, TX・3 DAYS AGO
ValleyCentral

EDINBURG, Texas (ValleyCentral) — A very special day for eight South Texas children as they were officially adopted into their forever homes. Jessica Garcia said she was blessed to officially become a mom to the baby girl she’s been caring for since she was a newborn. “We adopted our daughter. We have had her since […]
HIDALGO COUNTY, TX・3 DAYS AGO