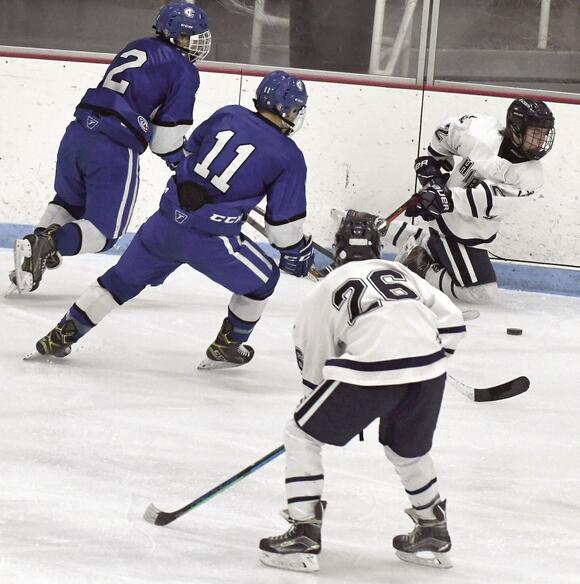 The Bluejackets dropped the first two games against Delano and Mound-Westonka.

Despite a hard-fought effort, Hibbing/Chisholm also fell in the final game of the holiday break 5-2 to Cambridge-Isanti Thursday in Hibbing.

Hibbing/Chisholm was given the game’s first chance after Cambridge-Isanti took a penalty less than two minutes after puck drop.

As the first penalty was about to expire, Cambridge-Isanti took another penalty giving Hibbing/Chisholm 4 seconds of 5-on-3 play.

Again, Hibbing/Chisholm put the puck on the net, but nothing came to pass.

In recent practices, the powerplay was a point of emphasis for Hibbing/Chisholm.

“We’d like to see them get more pucks to the net,” said Hibbing/Chisholm assistant coach Chris Zubich. “That is something we’ve been working on.”

Twelve minutes into the game, Hibbing/Chisholm finally got one through.

Zubich was happy with the team's energy going into the final game, especially after not playing much before the holiday break.

“Our guys worked hard,” Zubich said. “We were tired because we had gone through a sickness.”

“We battled and played a heck of a first game. We started slow the second day, but we responded well.”

Cambridge-Isanti took the lead with just over twelve minutes left in the second period when Will O’Donovan got the puck on the goal line and ricocheted it off Hibbing/Chisholm goalie Evan Radovich.

Zubich knows his team is close, but they just have to clean up a couple of things.

“We need to bear down, make plays, and execute. Most of the goals scored were preventable where we were on them, but they won the battle.”

Hibbing/Chisholm brought the game back to even three minutes later.

Frider sent the puck toward the Cambridge-Isanti net, and in the ensuing chaos around the net, Drew Janezich put the puck in the net.

The third period kicked off with a couple of solid chances for Hibbing/Chisholm, but the score remained tied.

Again, Hibbing/Chisholm gave itself decent looks, but nothing got past Sibell.

Then, with 4:30 left in the third, Cambridge-Isanti took the lead.

Wyatt Lindell was the goal scorer with assists going to Trenton Green and Jones.

Cambridge-Isanti added an empty-net goal with 26 seconds left to bring the score to its final of 5-2.