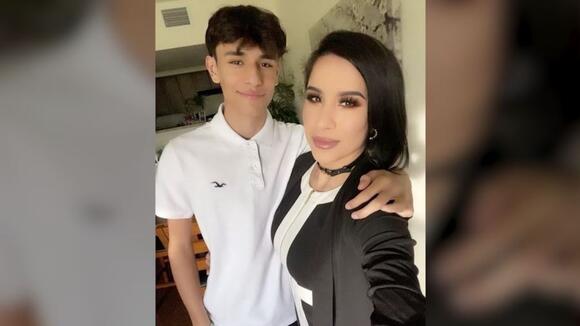 EL PASO, Texas (KTSM) A 16-year-old boy was shot and killed early Thursday morning in South Central El Paso. Police say two men in their 40s were also injured and taken to the hospital and one has been identified as a suspect.

“I know that I’m not the only one suffering the same situation that these people are going through and there’s a mother, there’s a father a brother a sister who are suffering. It aches my heart because we’re still suffering, and my life hasn’t been the same since my son was killed,” said Alma Vaughan, Kenneth’s mother.

Including Ellababedi a total of five El Paso teens have been shot and killed since August of 2021, an analysis by KTSM 9 News found.

The other teens killed include an 18-year-old and a 16-year-old who were shot and killed in Shawver Park in the Lower Valley in November, a 14-year-old was injured in this shooting as well.

In December of 2021, a 16-year-old was shot and died from his injuries following a shooting on Zaragoza.

The most recent death was the shooting on Durazno that left a 16-year-old dead.

The mother of Kenneth Ellababedi says she feels El Paso is changing and says she’s concerned about her other children’s safety.

Hoping for justice as police have not yet found those responsible for killing her son.

“Finding out you know that these people are out there it just enrages me because these same people might be the ones who also hurting other children, hurting other people, these criminals. We just will leave that things will be cleared out and there will be justice for my son but I know it’s going to take time,” said Vaughan.

Vaughan says she has been in contact with investigators and asks for anyone with information to contact Crime Stoppers of El Paso at 566-8477 (TIPS) or online at www.crimestoppersofelpaso.org .

For the latest news, weather, sports, and streaming video, head to KTSM 9 News.

Woman stabbed in Northeast EP near a motel

EL PASO, Texas (KTSM) – El Paso Police department responded to an emergency call in Northeast El Paso at the block of 8600 Dyer St. in the early hours of Tuesday morning. The call was made at 2:50 A.M. and police say a 30-year-old woman was stabbed. The incident happened across the street from the […]
EL PASO, TX・1 DAY AGO
KTSM

EL PASO, Texas (KTSM) – Celebrating the holidays with friends and family should be a joyous time of year for everyone. Too often, however, the holiday season turns tragic because someone chooses to get behind the wheel after drinking. TxDOT is bringing its “Drive Sober. No Regrets” campaign to El Paso, with an event and […]
EL PASO, TX・11 HOURS AGO
KTSM

LAS CRUCES, New Mexico (KTSM) – Las Cruces police are investigating a shooting that resulted in the death of a 51-year-old man Monday afternoon. About 4 p.m. Monday, Dec. 5, Las Cruces police were dispatched to the report of a gunshot victim at the Desert Lodge Motel, 1900 W. Picacho Ave. Officers arrived to find a […]
LAS CRUCES, NM・1 DAY AGO
KTSM

EL PASO, Texas (KTSM) – A man accused of stabbing another man to death outside of a Speedway gas station in Downtown El Paso last year has accepted a plea deal. Jonathon Baclet, 24, pleaded guilty to a lesser charge of manslaughter and was sentenced to 20 years in prison with a year of credit […]
EL PASO, TX・2 DAYS AGO
KTSM

EL PASO, Texas (KTSM) – A Fort Bliss soldier will receive the El Paso Police Department’s Life Saving Award for action he took that likely saved the life of a driver involved in a crash early Saturday morning at McRae and Gateway East. Video of the incident has been making the rounds on social media […]
EL PASO, TX・2 DAYS AGO
KTSM

EL PASO, Texas (KTSM) – Las Cruces police working on a special project to deter porch piracy made an arrest. Gabriel J. Sierra, 34, was arrested this past week and has been charged with one count of larceny up to $500. Las Cruces Community Outreach officers witnessed Sierra approach a home in south-central Las Cruces and […]
LAS CRUCES, NM・3 DAYS AGO
KTSM

EL PASO, Texas (KTSM) – Crime Stoppers of El Paso and the El Paso Police Department are asking for the public’s help in finding two men who were kicked out of a Cincinnati Entertainment District bar and then returned armed with guns, terrorizing the establishment. At about 1:40 a.m. on Thursday,  Oct. 27, two men who […]
EL PASO, TX・4 DAYS AGO
KTSM

EL PASO, Texas (KTSM) – U.S. Rep. Veronica Escobar, D-Texas, announced Tuesday night that the Senate has confirmed El Paso’s former District Attorney Jaime Esparza as the United States Attorney for the Western District of Texas. “I am proud to announce that El Pasoan Jaime Esparza has been officially confirmed as the U.S. Attorney for […]
EL PASO, TX・1 DAY AGO
KTSM

EL PASO, Texas (KTSM) – New Mexico State University announced Tuesday, Dec.  6 it will hire an external, third-party investigator to review the events surrounding a shooting in Albuquerque that left a University of New Mexico student dead and Aggie basketball player Mike Peake wounded. The review of those events, involving Peake and others, will […]
ALBUQUERQUE, NM・1 DAY AGO
KTSM

EL PASO, Texas (KTSM) – The city of El Paso saw more than 22,000 migrants released out on its streets in November, the highest number since the releases began back in September. That is according to an update received by the El Paso County City Council Monday, Dec. 5. Daily releases in November ranged from […]
EL PASO, TX・2 DAYS AGO
KTSM

EL PASO, Texas  (KTSM) – A two-vehicle crash near Santa Teresa, New Mexico  late Friday night sent  three  people  to the hospital. The crash happened along the Pete Domenici Highway and McNutt road. The injuries were described as non-life-threatening,  according to a tweet by the Sunland Park Fire Department,  which responded along with the Dona […]
SANTA TERESA, NM・4 DAYS AGO
KTSM

EL PASO, Texas (KTSM) – The El Paso County Sheriff’s Office teamed up with the Majesty Car Club to collect toys for the Sheriff’s Office annual Badge Toy Drive. The car show was held Sunday, Dec. 4 at Twin Peaks in East El Paso and featured a dozens of cars and trucks for the public […]
EL PASO COUNTY, TX・3 DAYS AGO
KTSM

EL PASO, Texas (KTSM) – The Office of the Medical Examiner says it has gotten a high volume of calls from people in the public saying they have missed a call from the county office. County officials say the office will never leave a message or make  a call without giving the name of the […]
EL PASO, TX・4 DAYS AGO
KTSM

EL PASO, Texas (KTSM) — Children are filling hospital beds with the flu, RSV and COVID-19, with El Paso Children’s Hospital reporting its at full capacity. “In certain instances, there has been overflow. Children haven’t been able to get out of the emergency departments up to the floor. For example, they may be in hallways,” […]
EL PASO, TX・1 DAY AGO
KTSM

EL PASO, Texas (KTSM) — A bombshell report published by Albuquerque station KOAT Monday night indicates that New Mexico State coaches held onto the gun used by Mike Peake in a self-defense killing on the University of New Mexico campus last month. According to the KOAT report, coaches left Albuquerque on the team bus after […]
ALBUQUERQUE, NM・2 DAYS AGO
KTSM