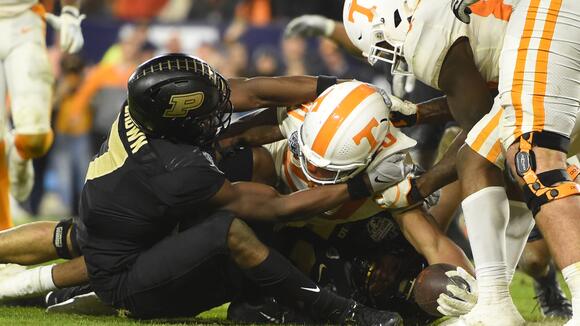 After a back-and-forth fireworks show on offense through both halves, both Purdue and Tennessee needed additional drives to decide which team would be the champion of the 2021 Music City Bowl.

Unfortunately for the Volunteers, it was a game that head coach Josh Heupel, players and fans will remember as one that came down to a controversial call in overtime. On fourth and goal at Purdue’s 1-yard line, running back Jaylen Wright took the snap from Hendon Hooker, pushing his way toward the goal line.

While Wright reached his arm and the football across the goal line, referees ruled that Wright’s forward progress was stopped short of the goal line. As a result, it was a turnover on downs for Tennessee.

Terry McAulay, who breaks down rules for Sunday Night Football on NBC and Notre Dame on NBC, noted that the timing of the whistle was irrelevant.

“The ruling was his [Wright] forward progress was stopped short of the goal line” McAulay said. “It’s over at that point. There is nothing replay can do with it.”

Purdue, in return, ran three plays before kicker Mitchell Fineran nailed a 39-yard field goal to secure a 48–45 victory for the Boilermakers.

Before going into overtime, both schools combined for 1,265 yards, the second-most yardage in bowl history, trialing only the 1,397 yards combined between Baylor and Washington in the 2011 Alamo Bowl.

The Boilermakers (9–4) earned their first nine win season since 2003. Purdue quarterback Aidan O'Connell threw for 534 yards, five touchdowns including three for 60-plus yards and three interceptions, while Hooker finished with 378 yards on 26-of-41 passes and five touchdowns.

But the Volunteers won't care much about their gaudy stats after the heartbreaking fashion in which their season ended.

Joseph was detained by police Wednesday after a domestic disturbance.
LINCOLN, NE・1 DAY AGO
Sports Illustrated

Senator Joe Addabbo Jr. wants the Jets to stop playing their home games in New Jersey: “It pains me.”
QUEENS, NY・1 DAY AGO