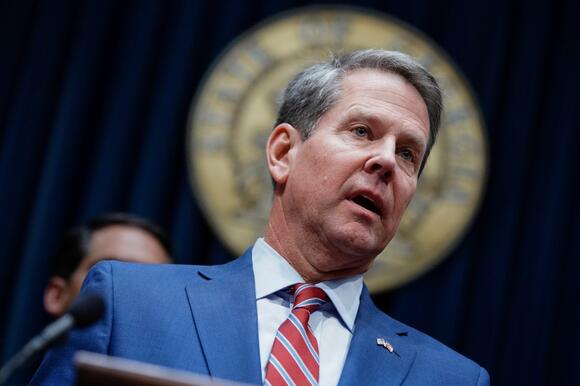 ATLANTA (AP) — Gov. Brian Kemp on Thursday signed new maps for Georgia’s congressional delegation, state Senate and state House into law, resulting in at least two immediate lawsuits challenging the maps, even as candidates gear up to run under the new lines.

The new districts are designed to increase the number of Republicans in Georgia’s 14-member congressional delegation from eight to nine, turning the suburban Atlanta 6th District now held by Democratic Rep. Lucy McBath into a strongly Republican district. McBath has already announced that she’s jumping to the new 7th District in Gwinnett and Fulton counties, which was made much more Democratic, to mount a primary challenge against fellow Democratic U.S. Rep Carolyn Bourdeaux.

The Republican Kemp’s decision to delay signing the maps reduces the amount of time for a lawsuit before candidates qualify in March and voting begins in advance of the May 24 party primaries. The short period could allow the state to ask a judge to delay a decision until after the 2022 elections are run under the maps Kemp signed.

Critics also allege that the maps violate the federal Voting Rights Act by unnecessarily dividing minority populations, especially because nonwhite people make up most of the new Georgians added in the past decade.

Democratic lawyer Marc Elias sued in federal court in Atlanta over the congressional map on behalf of six voters . The suit claims the lines are unconstitutional because they dilute Black voting strength by not drawing as many Black-majority state Senate and House districts as possible.

Particularly, the suit contends lawmakers should have drawn an additional Black majority district centered on Cobb and Douglas counties, instead of packing many Black voters into some districts and cracking other Black population concentrations among multiple Republican-dominated districts.

“The General Assembly could have instead created an additional, compact congressional district in which Black voters, including Plaintiffs, comprise a majority of eligible voters and have the opportunity to elect their preferred candidates,” the suit states.

The suit challenges three Senate districts — District 16 in part of Fayette and all of Spalding, Pike and Lamar counties; District 17 in parts of Henry, Newton and Walton counties and all of Morgan County; and District 23, which includes parts of Richmond and Columbia counties as well as all of 11 other east Georgia counties.

The ACLU alleges that majority Republicans erred only by drawing as many majority-minority districts in the Senate as it started with, not recognizing the growing number and share of Black voters in the state.

The lawsuit also argues that at least five more majority-Black state House districts could have been drawn, including at least three in Atlanta’s southern and eastern suburbs, at least one more around Augusta, and at least one more in southwest Georgia.

Both suits name Secretary of State Brad Raffensperger as a defendant, even though he didn’t draw the district lines, because he is the state’s chief elections officer. The congressional suit also lists State Election Board members as defendants.

The U.S. Supreme Court in the last decade has ruled out challenges based on partisan gerrymandering. But although the court struck down the requirement that Georgia and other areas with a history of racial discrimination get preclearance for new district maps from the U.S. Justice Department, the way remains clear for people to sue in court alleging racial bias after lawmakers pass maps.

Republicans say they were careful to follow the dictates of the Voting Rights Act. They also note that their maps split fewer counties.

Fair Districts Georgia, a group that analyzed the maps with an eye toward preventing gerrymandering, said all three maps would have fewer districts where each party would have a competitive shot at winning than under current lines.

The General Assembly must redraw electoral districts at least once every decade to equalize populations after the U.S. census.

Tuesday’s Senate run-off in Georgia is vital, even though Democrats have already secured control of the upper chamber. Sen. Raphael Warnock (D-Ga.) bested former football star Herschel Walker by roughly 36,000 votes in the initial round of voting on Nov. 8. But Warnock fell just short of getting the necessary 50 percent of votes cast […]
GEORGIA STATE・1 DAY AGO
WJBF

The highly anticipated Georgia runoff election is just days away, with both candidates getting a boost from high-profile members of their party.
GEORGIA STATE・1 DAY AGO
WJBF

Biden says Walker doesn’t deserve to be in the Senate

President Biden on Friday said that Republican candidate Herschel Walker does not deserve to be in the Senate, just days ahead of the runoff in Georgia on Tuesday. During a stop at a International Brotherhood of Electrical Workers (IBEW) fundraiser in Boston, Biden emphasized the differences between Democratic Sen. Raphael Warnock (D), and Walker.  “And […]
GEORGIA STATE・1 DAY AGO
WJBF

A Georgia man has been sentenced to serve nearly three years in federal prison for sending a letter threatening to kill President Joe Biden and to blow up the White House, prosecutors said Thursday.
BARNESVILLE, GA・2 DAYS AGO
WJBF

The rulemaking arm of the Democratic National Committee (DNC) voted on Friday to make South Carolina the first voting state in the party’s presidential nominating calendar, The Associated Press reported. South Carolina will replace the starting-gun spot held for decades by Iowa after that state’s caucus suffered technical problems in 2020. The shift would also […]
IOWA STATE・1 DAY AGO
WJBF

A brand new poll released Thursday morning shows incumbent Senator Raphael Warnock with a slight edge over challenger Herschel Walker with just five days left until their runoff for one of Georgia's seats in the U.S. Senate.
GEORGIA STATE・2 DAYS AGO
WJBF

A woman is accused of using someone else's nursing credentials to work at three Upstate care facilities.
PIEDMONT, SC・7 HOURS AGO
WJBF

The state of Georgia has secured a $250 million grant from the federal government to expand access to high-speed internet in rural counties across the state.
GEORGIA STATE・2 DAYS AGO
WJBF

Infowars host Alex Jones filed for bankruptcy on Friday, after a series of defamation trials resulted in Jones owing nearly $1.5 billion to the families of the victims of the Sandy Hook shooting, The Washington Post reported.
CONNECTICUT STATE・1 DAY AGO
WJBF

An appeals court on Thursday ruled that the appointment of a special master after the search of former President Trump’s Florida home was improper, determining that a lower court could not limit the Justice Department investigation into the mishandling of White House records at Mar-a-Lago.  “The law is clear. We cannot write a rule that allows any subject of […]
FLORIDA STATE・2 DAYS AGO
WJBF

Public alert issued after claims of plastic in sausage

KSNF/KODE — The U.S. Department of Agriculture’s Food Safety and Inspection Service (FSIS) is issuing a public health alert over concerns that Jet High Prairie Meats and Fantasma’s finest fully cooked summer sausage products may be contaminated with extraneous materials, specifically plastic. The problem was discovered when the firm notified FSIS that they received a […]
MISSOURI STATE・2 DAYS AGO
WJBF

As part of World AIDS Day on Thursday, SC health officials are offering residents free screenings at local health departments throughout the state.
3 DAYS AGO
WJBF

‘I fought a shark and won’: 10-year-old fends off shark at Florida beach

A 10-year-old girl is staying positive after she fended off a shark during an encounter at a Florida beach.
FLORIDA STATE・3 DAYS AGO
WJBF

ORANGEBURG COUNTY, S.C. (WCBD) – Autopsy results revealed a woman found dead in her Orangeburg County home suffered a gunshot wound to the upper body. Deputies with the Orangeburg County Sheriff’s Office were called to a Louise Drive home on Thanksgiving Day to conduct a welfare check. That is when they found the 46-year-old woman […]
ORANGEBURG COUNTY, SC・1 DAY AGO
WJBF

The father of JonBenét Ramsey has sent a letter to Colorado Gov. Jared Polis with a plea to let a private company test the DNA evidence.
COLORADO STATE・2 DAYS AGO
WJBF

Now you can eat your Chick-fil-A and wear it, too

The 'Home of the Original Chicken Sandwich' has released some new items for the chicken lover in your life... and this time, it's not food.
ATLANTA, GA・2 DAYS AGO