With Houston's homicide rate up by 18% since last year, families are looking back on a tough year 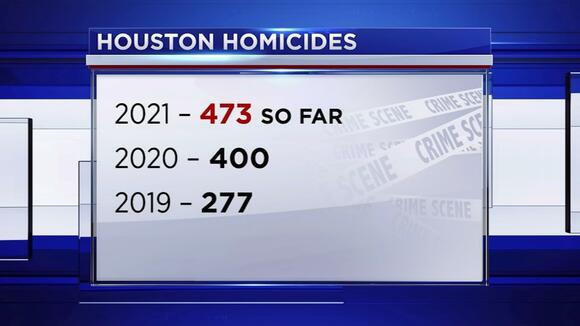 As we get ready to begin a new year, many families are looking back at a tough year. Houston just recorded its 473rd homicide of the year, which means murders are up 18% from last year. "These holidays, I just don't want to celebrate. I really don't," said Manda Lagway. Lagway is now caring for her grandchildren, Greyson, Lyric, and Gregory. Both Greyson and Lyric survived a brutal attack in June that killed their mother, 29-year-old Donyavia Lagway, and their father, 35-year-old Gregory Carhee, and their sister, six-year-old Harmony Carhee. The suspect remains in jail. "We don't have no mother or nothing and all the fun things we used to, we can't do it no more because they not here," explained Gregory. So far this year, 473 people in our city have been murdered. Last year, the number was 400. In 2019, the number was 277. "I just pray that everybody comes together as a city of citizens, everything about the criminal justice system," said Houston Police Chief Troy Finner. "At the end of the year, at the end of the month, the numbers did continue to go down." Numbers have gone down from this spring, when our city's murder rate was a full 44% higher than the year before. But, it's little consolation for families facing another year without their loved ones.

While the shooting happened as kids were going home from school, no one was injured, but police are calling the shooting "very traumatic."
HOUSTON, TX・19 HOURS AGO
ABC13 Houston

Police are certain the late Migos rapper was a bystander the night he died. Now, we're learning through newly-obtained documents that somebody in the group's camp was also firing shots.
HOUSTON, TX・13 HOURS AGO
ABC13 Houston

Little 2-year-old Nadia Lee hasn't been seen since October. Despite extensive searches of waterways and a landfill, her body has not been found.
PASADENA, TX・14 HOURS AGO
ABC13 Houston

The argument that led to Jaquan Thompson being shot nine times all started over $40, the DA's office said. Terrance Thomas pleaded guilty on the eve of his trial.
HOUSTON, TX・31 MINUTES AGO
ABC13 Houston

The deadly shooting happened Wednesday right behind a towering parking structure that serves Hobby Airport. The woman surrendered but hasn't been charged with anything yet.
HOUSTON, TX・13 HOURS AGO
ABC13 Houston

Authorities say the 24-year-old woman's family saw her unresponsive and bleeding inside an apartment after not hearing from her or her husband.
HOUSTON, TX・2 DAYS AGO
ABC13 Houston

Police are now looking for five suspects between 16 and 18 years old. One of them reportedly displayed a gun similar to a "TEC-9" before the robbery.
HOUSTON, TX・21 HOURS AGO
ABC13 Houston

Investigators said the victim was threatened with a weapon before being robbed by a man who is still on the loose four months later.
HOUSTON, TX・18 HOURS AGO
ABC13 Houston

The woman was walking toward the front door of a convenience store when she was attacked, HPD said. Video shows the woman lying on the ground as the man punches her.
HOUSTON, TX・1 DAY AGO
ABC13 Houston

Investigators said the deadly crash happened at a southeast Houston intersection when the motorcyclist slammed into another vehicle.
HOUSTON, TX・13 HOURS AGO
ABC13 Houston

Deputies say that the school's solid bronze falcon statue, which is worth more than $5,000, was sawed off of its platform on the campus.
HARRIS COUNTY, TX・14 HOURS AGO
ABC13 Houston

The search is over for Aamir Ali, five days after he was last seen alive. His family said he left his belongings behind during a camping trip with friends.
HOUSTON, TX・17 HOURS AGO
ABC13 Houston

Just hours before the fire, the mother said she was asking management to fix an electrical problem in her apartment but was only told, "We are going to get to it."
HOUSTON, TX・13 HOURS AGO
ABC13 Houston

Authorities said a woman who had parked in a handicapped spot tried putting her car in reverse but instead, she went forward, crashing on to the restaurant.
HARRIS COUNTY, TX・23 HOURS AGO
ABC13 Houston

The ATM technician wrestled with the suspect but backed off when he told him he had a gun, HPD said. The suspect got away in a black SUV.
HOUSTON, TX・1 DAY AGO
ABC13 Houston

HPD said the 20-year-old was arrested on Dec. 1 on unrelated charges, and subsequently charged with capital murder after an interview with investigators.
HOUSTON, TX・2 DAYS AGO
ABC13 Houston

HOUSTON, Texas (KTRK) -- Two suspects accused or connected in the murder of Migos rapper Takeoff went before a judge Wednesday regarding their bond conditions. Patrick Xavier Clark, the man accused of murdering Migos rapper Takeoff more than a month ago in downtown Houston, asked a judge for $5,000 to go toward hiring a private investigator in his defense, according to a motion filed on Monday.
HOUSTON, TX・21 HOURS AGO
ABC13 Houston

'I don't believe it': Family of inmate in coma to speak in front of Harris Co. Jail after incident

The injuries Adael Gonzalez Garcia has are from a fall off his bed, the sheriff's office said, but his family doesn't believe what authorities are telling them. They are calling for answers on Thursday.
HARRIS COUNTY, TX・1 HOUR AGO