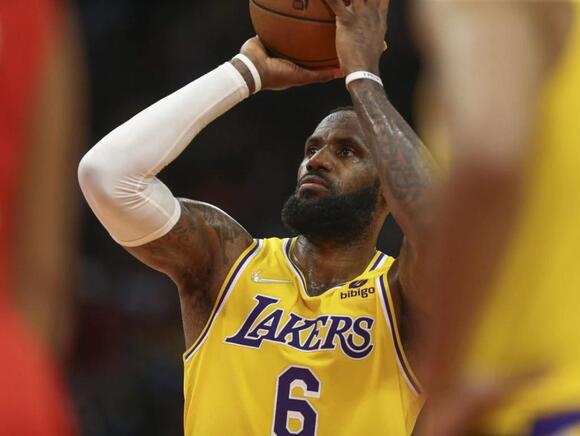 Recently struggling Western Conference counterparts look to end 2021 on a high note Friday in Los Angeles when the Lakers welcome the Portland Trail Blazers to town for a New Year’s Eve matchup.

Los Angeles dropped its sixth decision in the last seven on Wednesday, 104-99 at Memphis.

LeBron James posted 37 points and 13 rebounds in the loss, and Russell Westbrook recorded a triple-double of 16 points, 12 assists and 10 rebounds, but a combination of 18 turnovers and just 16 fourth-quarter points doomed the Lakers.

“It turned into stand-around-and-watch,” Los Angeles assistant coach David Fizdale said in his postgame press conference. “You let a defense like Memphis stand and watch, the way that they get after it and turn you over and protect the paint, you will get a 16-point quarter.”

Los Angeles’ lack of depth may have been a contributing factor in the late-game offensive struggles. The Lakers bench produced just 18 points, and the Los Angeles Times reported that Wednesday’s starting lineup was the 20th different combination the team has used this season.

The Lakers are without veterans Trevor Ariza and Rajon Rondo due to health and safety protocol. Anthony Davis, who is averaging 23.3 points and 9.9 rebounds per game, is out with a sprained MCL.

Roster depletion is hardly exclusive to Los Angeles in Friday’s matchup, however. Portland — which comes in having lost 10 of its last 12 including three straight — faces a bevy of absences due to health and safety protocol.

The litany of unavailable players compounds with Portland missing explosive scorer CJ McCollum, sidelined since Dec. 6 due to a collapsed lung.

Damian Lillard and Norman Powell both scored 32 points to carry the load in Wednesday’s loss.

“I like the way we competed,” Powell said in his postgame press conference. “If we play with that energy and that togetherness and toughness last game (vs. Dallas), we would have (given) ourselves a chance to win.”

“It’s challenging … being down so many players,” Lillard said afterward. “We come back from a road trip, and we’ve got a whole new team. We can’t really run much action offensively. We’re teaching defensive principles all over again and trying to change what we’ve doing defensively to make it easier and make ourselves have to do less work.”

Portland’s roster changes, including the additions of Cameron McGriff, Reggie Perry, Brandon Williams and Jarron Cumberland to 10-day contracts via the hardship exception, pushed Larry Nance Jr. into the starting lineup on Wednesday.

Nance scored 14 points, grabbed nine rebounds and dished nine assists against the Jazz. Nance spent his first two full seasons and part of his third pro campaign with the Lakers.

The Blazers’ roster reshuffling will continue on Friday as McLemore and Smith are set to return (along with Nassir Little from a right ankle sprain), while McCollum, Anfernee Simmons, Brandon Williams, Nurkic, Covington, Zeller, Watford and Blevins have all been ruled out.

The Blazers won the first meeting on Nov. 6, 105-90, though James did not appear for Los Angeles in that matchup.

The Brooklyn Nets have engaged in trade talks with the Atlanta Hawks over big man John Collins as the team looks for help in the frontcourt.
BROOKLYN, NY・2 DAYS AGO
Sportsnaut

The Washington Wizards are receiving heavy interest for one of its All-Star level players as the trade talks around the NBA begin to ramp up soon.
WASHINGTON, DC・2 DAYS AGO
Sportsnaut

Devin Booker scored a season-high 51 points before resting in the fourth quarter as the Phoenix Suns extended their winning
PHOENIX, AZ・2 DAYS AGO
Sportsnaut

Miles Bridges is expected to serve a significant suspension once he signs with an NBA team after his plea deal relating to felonies of domestic violence.
CHARLOTTE, NC・2 DAYS AGO
Sportsnaut

Most of the Memphis Grizzlies’ struggles this season have come on the road. Seven of their nine losses have come
DETROIT, MI・3 HOURS AGO
Sportsnaut

Teams that rallied in the second halves of their Pac-12 openers Thursday face each other Sunday in Tempe, Ariz., with
STANFORD, CA・1 HOUR AGO
Sportsnaut

Louisville looks for more intensity in clash vs. Miami

Kenny Payne still is looking for that magical initial win at his alma mater. Louisville (0-7) aims to reward its
LOUISVILLE, KY・7 HOURS AGO
Sportsnaut

Houston aware No. 1 ranking is volatile ahead of meeting St. Mary’s

Houston’s first game as the No. 1 team in the nation in nearly 39 years was a rousing success. The
HOUSTON, TX・1 DAY AGO
Sportsnaut

The recently resurgent Los Angeles Lakers look to stay hot away from home when they continue a five-game eastern trip
LOS ANGELES, CA・3 HOURS AGO
Sportsnaut

The debate about the best NBA players of all time is over. We've compiled this list of the 20 biggest winners to ever step foot on an NBA court.
CALIFORNIA STATE・1 DAY AGO
Sportsnaut

The Phoenix Suns will look to shrug off a ragged defensive performance and a loss at home to one of
SAN ANTONIO, TX・4 HOURS AGO
Sportsnaut

The NBA fined Memphis star Ja Morant $35,000 on Saturday for his confrontation with an official earlier this week in
MEMPHIS, TN・6 HOURS AGO
Sportsnaut

Donovan Mitchell has been as good as advertised in his first season with the Cleveland Cavaliers as they face the
CLEVELAND, OH・3 HOURS AGO
Sportsnaut

Pacers, ex-Kings get thumped in return to Sacramento

The new and improved Sacramento Kings spoiled the homecoming of Tyrese Haliburton and Buddy Hield on Wednesday night, with Harrison
INDIANAPOLIS, IN・2 DAYS AGO