2 Injured After Hit-And-Run In Tarentum 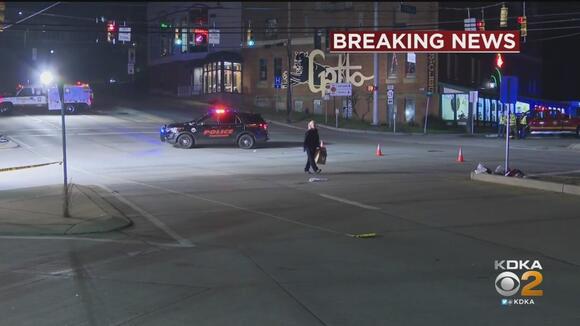 The Allegheny County Police Department said officials were notified of the crash in the 100 block of East 7th Avenue in Tarentum on Thursday.

First responders found an adult victim and a juvenile victim on the scene. Both were taken to local hospitals.

Officials said the driver fled the scene. No word on the type of vehicle.

WILKINSBURG, Pa. (KDKA) - A woman reported missing out of Cleveland has been found dead in the backyard of a Wilkinsburg home.Adrianna Taylor was officially listed as a missing person by Cleveland police on Nov. 13. According to CBS affiliate WOIO, her family previously said they haven't heard from her since early October.A report from the Allegheny County Medical Examiner's office said Taylor was found unresponsive in the backyard of a home in the 800 Block of Hill Avenue in Wilkinsburg.On Saturday, investigators hadn't released any additional details about Taylor's death. Allegheny County Police said the Cleveland Police Department and...
WILKINSBURG, PA・5 HOURS AGO
CBS Pittsburgh

PITTSBURGH (KDKA) - A man was arrested after leading state troopers on a chase through Fayette County on Friday.It started when a trooper tried to pull over David Phillips for a vehicle code violation near Wingrove and Eutsey Road.During the chase, one of the troopers failed to turn and crashed into a yard.KDKA was told the officer was not injured.Phillips was taken into custody.
FAYETTE COUNTY, PA・8 HOURS AGO
CBS Pittsburgh

Police investigating after man dropped off at hospital with gunshot wounds

PITTSBURGH (KDKA) - An investigation is underway after a man was dropped off at a local hospital with gunshot wounds. According to Pittsburgh Public Safety, just after 2:30 a.m., police were informed of a man who had been taken to a hospital after he was shot in the leg. He was in stable condition when he was dropped off and spoke with police but did not tell them much about what happened. Later, officers located a scene inside a home in the 2900 block of Sacramento Avenue and spoke with the residents. They are investigating. Stay With KDKA.com For More Details
PITTSBURGH, PA・21 HOURS AGO
CBS Pittsburgh

PITTSBURGH (KDKA) - Several people suffered minor injuries after a crash on the Parkway West in the outbound lanes.It happened Saturday afternoon near the Carnegie exit.Eight vehicles were involved, and five needed to be towed.
PITTSBURGH, PA・1 DAY AGO
CBS Pittsburgh

JEFFERSON HILLS, Pa. (KDKA) - A deadly pedestrian accident is under investigation in Jefferson Hills.Route 51 was shut down in all directions Saturday evening after a car hit a person near the Sunoco gas station.KDKA is working to learn the name of the victim and what happened to cause the accident.
JEFFERSON HILLS, PA・1 DAY AGO
CBS Pittsburgh

Woman killed in crash near the Mansfield Bridge

GLASSPORT (KDKA) - One woman is dead, and a child is in the hospital after a crash on Thanksgiving morning in Glassport. Allegheny County Police said the driver was found dead at the scene.  Police said it was around 7:45 a.m. on Thursday when the 31-year-old woman and the 7-year-old child were involved in the crash. It happened right near the Mansfield Bridge in Glassport on Monongahela Avenue. Officers said a blue SUV was the only vehicle involved.  "I was getting ready for church around 7:30 a.m. and I heard a loud bang. I looked out the window and I...
GLASSPORT, PA・3 DAYS AGO
CBS Pittsburgh

1 killed in crash in Sharon

PITTSBURGH (KDKA) — A man was killed in a crash Thursday morning in Sharon. A 63-year-old man died in the one-vehicle crash on West State Street around 10 p.m. Police said the driver hit a utility pole.Police are investigating. The cause of the crash is unknown at this time.
SHARON, PA・3 DAYS AGO
CBS Pittsburgh

CHARLEROI, Pa. (KDKA) - Crews rescued a person from a fire Friday night in Charleroi.It happened on Church Street. The person was taken to the hospital.Crews told KDKAhoarding conditions made it impossible to get inside the home at first.They eventually did get the fire under control. There's no word on how it started.
CHARLEROI, PA・1 DAY AGO
CBS Pittsburgh

PITTSBURGH (KDKA) -- A reopening mass was held on Sunday at St. Mary's Church in New Kensington.The church had been closed since April of 202 when it was heavily damaged during a tornado.A portion of the roof was torn off and the church's bell tower was damaged.Restoration work started in December of last year.
NEW KENSINGTON, PA・3 HOURS AGO
CBS Pittsburgh

PITTSBURGH (KDKA) — Westmoreland County Deputy Coroner Joshua Zappone has died.According to the Facebook page of the Westmoreland County Office of the Coroner, Zappone died on Thursday. He was the deputy coroner for the last 13 years. The office posted that funeral arrangements will be set by McCabe Funeral Home in Derry."Please keep his family in your thoughts and prayers," the office posted on Facebook. "Rest in Peace Josh. You will be missed."
WESTMORELAND COUNTY, PA・2 DAYS AGO
CBS Pittsburgh

BUTLER, Pa. (KDKA) — A Butler County man is accused of hitting and strangling a pregnant woman twice in one day.Butler City police said officers responded to a domestic dispute on Kaufman Drive on Thursday around 2:30 a.m. Police talked to the victim, who said Jamel Barnes assaulted her. The man was taken to Butler County Prison and charged with strangulation, simple assault and resisting arrest. After he was arraigned, he was released with an unsecured bond. Police said he returned to the home on Kaufman Drive, forced his way inside, hit the woman — who is nine months pregnant — in the face and strangled her. Police said while attacking the woman, he said, "I'm gonna kill you," and "I hope you and the baby die." The woman escaped the home and went to the police station. Later, Barnes was arrested again. He is now charged with burglary, strangulation, intimidation of a witness, simple assault, and terroristic threats. He is back in the prison.
BUTLER COUNTY, PA・3 DAYS AGO
CBS Pittsburgh

Woman taken into custody after setting home on fire in Duquesne

PERRYOPOLIS, Pa. (KDKA) - The hail came down fast and furious in some parts of the area Sunday.KDKA received several photos and videos from people in Fayette and Washington Counties, detailing the impacts of today's severe weather.In Fayette County, the National Weather Service posted photos of hail measuring up to two inches.In Stockdale, more damage from the hail, but this is the siding of someone's house.Even more large hail was found in Perryopolis.Juliann Baysinger was working inside Beck's Pizza on Route 51 in Perryopolis when the hailstorm roared through Sunday afternoon.She said the sounds coming from outside sent her into...
FAYETTE COUNTY, PA・4 HOURS AGO
CBS Pittsburgh

NORTH SEWICKLEY, Pa. — A massive Christmas display at a home in North Sewickley Township was targeted and damaged again Tuesday night.There are more than 400 lighted decorations outside Emmett Santillo's home on Mercer Road. Overnight on Friday, Santillo and North Sewickley Township police said a few wires were cut."Why?" Santillo said. "Why would somebody do that?"Santillo said when he was checking on his lights on Wednesday morning, he noticed even more wires were cut."Obviously, the Grinch came back and visited again," he said. "It's kind of sad these types of people would behave this way. It's truly petty."Santillo started decorating...
NORTH SEWICKLEY TOWNSHIP, PA・3 DAYS AGO
CBS Pittsburgh

WAYNESBURG, Pa. (KDKA) - A woman is accused of leading police on a chase and fighting a Greene County sheriff's deputy who was trying to arrest her. The Greene County Sheriff's Office said deputies and Waynesburg police tried to stop Vicki Hoyle for traffic violations on Tuesday night when she took off. The sheriff's office said Hoyle stopped outside a home and ran inside. Deputies forced their way inside and the sheriff's office said a fight ensued with Hoyle, who allegedly head-butted a deputy in the face. Officers were eventually able to take Hoyle, who had an active probation violation warrant, into custody. Both Hoyle and the deputy were cleared by paramedics, the sheriff's office said. Hoyle was taken to the Greene County Jail on new charges.
GREENE COUNTY, PA・4 DAYS AGO
CBS Pittsburgh

PITTSBURGH (KDKA) – Pittsburgh Regional Transit needs your input on planned service changes to connect to its upcoming "bus rapid transit" project. As construction is expected to begin next spring on the Downtown-Uptown-Oakland BRT project, they're looking to implement some of the service changes as early as June to help buses avoid getting caught in construction traffic. The project will affect the following routes: -       61D-Murray-       71A-Negley-       71C-Point Breeze-       71D-Hamilton-       P3-East Busway-OaklandComments are being accepted over the phone and through the U.S. Postal Service from 9 a.m. on December 15 through 5 p.m. on Wednesday, February 1, 2023. They will also hold an informational session from 6 p.m. until 7 p.m. on Tuesday, January 10. You can get the full rundown and make comments at this link.
PITTSBURGH, PA・18 HOURS AGO
CBS Pittsburgh

PITTSBURGH (KDKA) -- Greene County is trying to form its own SWAT team, but not without concerns by county commissioners.District Attorney David Russo has been the push behind the plan, saying the team would allow for quicker response times to emergency situations like school shootings.But, according to the Herald Standard, commissioners sent Russo a letter addressing concerns, including the fact that Russo himself would allegedly be supervising the team's responses.Other issues included safety of citizens, financial liability, a lack of specialized training, and the fact that the county cannot provide insurance coverage for the team.The DA fired back, saying "The absence of a response team is much more dangerous to the public than having a team."He went on to say that "We are fulfilling a need for the safety of our citizens and children."
3 HOURS AGO
CBS Pittsburgh

BUTLER (KDKA) – In this week's KD Sunday Spotlight, we end our veteran series at Robin's Home in Butler. The house on East Pearl Street provides housing and services to female veterans and their children in Allegheny, Armstrong, Butler, Clarion, Erie, Lawrence, and Mercer counties.  Founder Mary Chitwood is an Army veteran and she said she opened the home in 2019 and named it in honor of her friend Robin. She also served in the Army and was deployed during Desert Storm. She passed away in 2017 after medical complications. Chitwood said women veterans are the fastest-growing population in the military to experience homelessness, and she wants to prevent that from happening. While the vets live at the home, they can use the services which include case management, financial literacy, workforce development, and child services. The newest program focuses on veterans in recovery.  They meet every Wednesday at 3:30 p.m. at the house. Chitwood just opened Robin's Home Thrift Store and Donation Center on South Main Street in Butler. Proceeds will towards the house and veteran resources. Everyone is welcome to attend the grand opening on December 16th.For more ways on how to donate or volunteer, go to their website at this link.
BUTLER, PA・19 HOURS AGO