‘We thank you all’: Mother and son find new home with the help of Spokane community 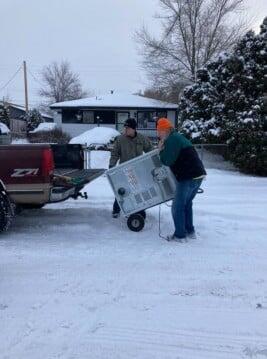 SPOKANE, Wa. — We have an amazing update to a story we shared with you last Thursday.

We introduced you to a mother and son who were facing homelessness but the community came together to make sure their heir holiday wish was fulfilled.

Heather Laird spent the last six months trying to find a new home but couldn’t afford another place in the area because she’s living on a fixed income.

She tried turning to local shelters, but they were turned away. Most local shelters in our community cater to women, men, or families with children under 18. Her son Sean is 29 and has severe autism, cerebral palsy, and diabetes.

With a week before having nowhere to go, they turned to us, and the community responded.

“It’s in the Valley and it’s wonderful. It’s in a great area, I can walk to a lot of different grocery stores before it gets too hot in the summer, and it’s perfect,” Heather explained.

One week ago, she was facing the possibility of being homeless with her son. This miracle, made possible by Family Promise, the Spokane community, and an old family friend.

At the time, Sean was like a part of their family. Heather reached out to Lewis’s family last week, as a last-ditch effort for help. It’s been more than seven years since they last saw each other.

“I contacted my son who was his caretaker, he got on the ball right away, starting to look at some of the legal things, getting the bank accounts issues and GoFundMe issues settled, etc. so it was fun,” Lewis explained.

That GoFundMe , which made it up to $6,200, was created by a viewer. Lewis said the GoFundMe was scrupulous in making sure the money went to the right person, and every dollar of those funds, going straight to getting Heather and her son into their new home.

“I owe you a big thanks. My son, we both seriously appreciate it, from the bottom of our hearts, we thank you all,” said Heather, sharing a heartfelt message for the community.

Going forward, Lewis and his family intend to be involved with Heather and her son, to help complete their new home, and give support for the areas they need beyond that.

RELATED: ‘Greatest news I could’ve received:’ Formerly homeless family gets an apartment in time for Christmas

SPOKANE, Wash. — If you are a curbside yard and food waste customer in Spokane, you have one week to finish yard clean up before the City suspends collection services for the winter months. Spokane uses a solid waste system with the option to pick up your yard waste and food scraps at the curb of your home. If you...
SPOKANE, WA・6 HOURS AGO
KXLY.com | 4 News Now

Riverfront Park Trail of Lights running through end of year

SPOKANE, Wash.— The Holiday cheer keeps on coming in Spokane! Saturday night, a Christmas tree lighting ceremony lit up Riverfront Park near the Numerica Skate Ribbon. Starting Saturday, you can also enjoy a walk through a Winter Wonderland and experience the holiday lights this holiday season. Riverfront Park on Howard Street is hosting the Riverfront Trail of Lights. The Riverfront...
SPOKANE, WA・4 HOURS AGO
KXLY.com | 4 News Now

Santa Claus is coming to South Hill this December

SPOKANE, Wash. — You better watch out, you better not cry, you better not pout, I’m telling you why. Santa Claus is coming to town! No, really, he actually is. Santa is making a special visit to South Hill for breakfast and photos at the Southside Community Center. You and your kids can enjoy a breakfast of pancakes, eggs, sausage,...
COEUR D'ALENE, ID・1 DAY AGO
KXLY.com | 4 News Now

‘The meal is awesome’: Community comes together to host Thanksgiving meal at Camp Hope

SPOKANE, Wash. — The community came together to feed those in need at Camp Hope, making sure those who may not have people to spend the holidays with have somewhere to go. Numerous churches, local businesses and neighbors from across the region volunteered their time to make it happen. At the event there was, of course, food, fellowship and a...
SPOKANE, WA・3 DAYS AGO
KXLY.com | 4 News Now

SPOKANE, Wash. — On Thursday, hundreds of people in the community were able to celebrate the holiday with others over a Thanksgiving meal. The Salvation Army of Spokane offered its annual Thanksgiving dinner to the community. Sometimes we take out favorite Thanksgiving meal for granted while others are not able to provide this meal for their families. People who came...
SPOKANE, WA・3 DAYS AGO
KXLY.com | 4 News Now

SPOKANE, Wash. — Gonzaga Prep students held a food drive to help feed those in need in the Spokane area. On Wednesday, students delivered more than 100,000 pounds of food to over 2,200 people. Students have spent the last 10 days across the city collecting food for the Thanksgiving Food Drive. Food includes a turkey and pie, but they are...
SPOKANE, WA・4 DAYS AGO
KXLY.com | 4 News Now

COEUR D’ALENE, ID. — The Christmas spirit is off to a bright start in the Inland Northwest. The 30th annual parade and tree lighting ceremony happened a few hours ago in Coeur d’Alene. The weather didn’t keep people away. Large crowds gathered to kick off the Christmas spirit together. “It’s not raining on my parade,” Lacy Garcia said. A parade...
COEUR D'ALENE, ID・1 DAY AGO
KXLY.com | 4 News Now

Two people in hospital from shed fire in Spokane Valley

‘Why has it taken this long?’: Spokane city, county officials give updates on Camp Hope

SPOKANE, Wash.– November 15th, a week after Spokane city and county leaders hoped to clear out Camp Hope, more than 400 people are still living at the camp. Local officials are now talking about getting the state, and non-profit organizations joined in transitioning people out of the camp soon. “This shouldn’t take decades, years, or months, but weeks to get...
SPOKANE, WA・4 DAYS AGO
KXLY.com | 4 News Now

SPOKANE, Wash. — The Santa Express store at River Park Square opens this Friday! It’s a unique experience where kids do the shopping for their friends and family with the help of volunteer elves. Gifts are laid out in sections by price, ranging between one dollar and $12. Volunteers will walk kids (age 4-12) through the Santa Express experience, helping...
SPOKANE, WA・5 DAYS AGO
KXLY.com | 4 News Now

Crash in South Hill sends one to hospital

SPOKANE, Wash. — One person is in the hospital after they got in a car crash in South Hill. The crash happened on Southeast and 29th. A car crashed into a sign and split in half. Police say the driver was going at a high speed past a police officer when they came through the intersection, lost control and hit...
SPOKANE, WA・2 DAYS AGO
KXLY.com | 4 News Now

How to have a productive conversation at Thanksgiving dinner

An argument about misinformation or a conspiracy theory at dinner is not how you want to spend the holiday.
SPOKANE, WA・4 DAYS AGO
KXLY.com | 4 News Now

SPOKANE, Wash. — The Numerica Tree Lighting Celebration is on Saturday, November 26 at 6 p.m. The event will be held in Riverfront Park right by the Numerica Skate Ribbon. Hot cocoa will also be available, courtesy of Starbucks. You can also take photos with Santa at River Park Square before the event. READ: Santa returns to River Park Square...
SPOKANE, WA・6 DAYS AGO
KXLY.com | 4 News Now

Salvation Army Spokane to give out free Thanksgiving Day meals

SPOKANE VALLEY, Wash. — Spokane Valley firefighters extinguished a house fire Wednesday night. The fire was located at N. Locust Road and E. Main Avenue. Neighbors reported seeing smoke at the home, and crews were dispatched at around 6:40 p.m. The fire was in the living room of the home, and crews were able to put out the fire. No...
SPOKANE VALLEY, WA・3 DAYS AGO
KXLY.com | 4 News Now

SPOKANE, Wash. – Spokane Police say multiple firearms have been taken in three recent gun store burglaries. SPD says stolen vehicles have been used to drive into different buildings to gain access to the guns. The first took place on Nov 24, when a car was used to breach a gun store in the 1700 block of East Trent Avenue....
SPOKANE, WA・2 DAYS AGO
KXLY.com | 4 News Now

SPRINGDALE, Wash.— A water boiling notice has been lifted for the City of Springdale. People who live in Springdale were required to boil their water before using it. The Stevens County Sheriff’s Office said Springdale issued a notice for people who use their water system. SCSO said to bring your water to a rolling boil for one minute before using...
SPRINGDALE, WA・4 DAYS AGO
KXLY.com | 4 News Now