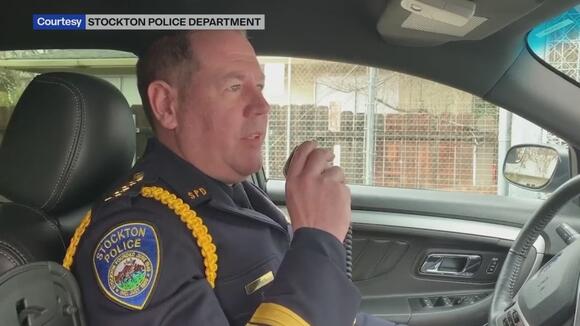 STOCKTON, Calif. (KTXL) — The new year will bring a new police chief to the city of Stockton.

Chief Eric Jones , who served with Stockton police for nearly three decades and spent the last nine as head of the department, retired Thursday.

“He’s been a beacon of stability and leadership for the city of Stockton as chief,” said Mayor Kevin Lincoln.

“He exemplifies all the qualities that I think you’re looking for in a 21st-century police chief,” said Stockton City Manager Harry Black.

Soon, the city will launch a nationwide search effort for the next police chief.

“Stockton deserves the best and we won’t settle for less,” Lincoln said.

Black will lead the search, working in conjunction with a search firm.

Black said elected city officials, the public and the police department itself will all have the opportunity to give their input to help select the new chief.

“At the end of the day, all the stakeholders, the community must feel like they had an opportunity to be a part of this process,” he said.

The search will likely last several months, with the hopes of having the new chief sworn in by early to mid-spring.

City officials say whoever the new chief ends up being they’ll have to demonstrate honesty, integrity and a commitment to Stockton.

“We want to continue to build upon the progress that it has been made underneath chief Jones’s leadership,” Lincoln said.

Assistant Police Chief James Chraska will act as interim chief until a new chief is sworn in.

MODESTO, Calif. (KTXL) — Modesto City Schools said a principal and certified employee at one of their schools were put on paid administrative leave due to allegations of inappropriate conduct. A spokesperson from the district told FOX40 News that district officials would investigate the allegations, but did not specify who made them. According to the […]
MODESTO, CA・4 HOURS AGO
FOX40

SACRAMENTO, Calif. (KTXL) — Sacramento Police said officers arrested a 15-year-old as a suspect in the October shooting of a man in the parking lot of Grant Union High School.  The deadly shooting happened just before 10 p.m. while a football game was being played at the school. Police did not mention a motive, but […]
SACRAMENTO, CA・5 HOURS AGO
FOX40

MANTECA, Calif. (KTXL) — The Manteca Police Department said it is hoping to return possibly stolen belongings officers found during a search back in November. Officers searched a storage unit on Nov. 14 that was connected to a burglary. Large abstract paintings were some of the items found inside the unit.  Police believe the paintings […]
MANTECA, CA・1 DAY AGO
FOX40

SACRAMENTO, Calif. (KTXL) —The Sacramento Police Department said they found a gunshot victim around 15 miles from where the shooting occurred Wednesday morning. According to police, officers responded to reports of a shooting around 11:25 a.m. near Truxel Road in Natomas where they found a victim with non-life-threatening injuries. Police said they believe the shooting […]
SACRAMENTO, CA・8 HOURS AGO
FOX40

WEST SACRAMENTO, Calif. (KTXL) — A West Sacramento woman plead guilty on Tuesday to theft of mail by a Postal Service employee and possession with intent to distribute marijuana, according to the United States Department of Justice. From October 2018 to February 2019, Shabina Debbie, 54, stole items from mail that “had been entrusted to […]
SACRAMENTO, CA・1 DAY AGO
FOX40

SACRAMENTO COUNTY, Calif. (KTXL) — Running a red light —any red light— is illegal and can lead to fines in the hundreds of dollars, and at 26 intersections in the Sacramento area, cameras are in place to catch drivers that do so. The red-light cameras throughout the city and county are used to help police enforce […]
SACRAMENTO, CA・3 DAYS AGO
FOX40

The Latest — Tuesday, Dec. 6: 4:00 p.m. The two people killed in the crash were identified as 33-year-old Juan Carlos Rodriguez from Sacramento and 32-year-old Lionel Rodriguez from Simi Valley. Original story below: SACRAMENTO, Calif. (KTXL) — Two people died Tuesday morning along southbound Interstate 5 while working on a broken down car, according […]
SACRAMENTO, CA・1 DAY AGO
FOX40

SACRAMENTO COUNTY, Calif. (KTXL) — The Sacramento County Sheriff’s Office announced the arrest of two men in connection with the shooting death of a person in mid-October. Sheriff’s officials said that Alexander Ketchens, 31, and Reginald Jackson, 22, were arrested on Friday, December 2, and booked into the Sacramento County Main Jail. The deadly shooting […]
SACRAMENTO COUNTY, CA・2 DAYS AGO
FOX40

SACRAMENTO, Calif. (KTXL) — A vehicle accident on Marconi Avenue above Business 80 in Sacramento has sent debris onto some lanes and cause the temporary closure of the freeway, according to the Sacramento Police Department. Police told FOX40 News that fencing and guardrail fell onto the freeway after a big rig “cut a corner too […]
SACRAMENTO, CA・1 DAY AGO
FOX40

Woodland RV fire results in the death of a dog

WOODLANDA, Calif. (KTXL) — An RV fire in Woodland on Tuesday claimed the life of a family’s dog, according to the Woodland Fire Department. When fire crews arrived in the 300 block of El Capitan Road they were quick to knockdown the fire before it spread to two adjacent homes, according to fire officials. The […]
WOODLAND, CA・1 DAY AGO
FOX40

Looking to stay warm during the storms? Here are the warming centers in the city and county of Sacramento

Editor’s Note: This story has been updated to correct the nature of the charges against the protesters. SACRAMENTO, Calif. (KTXL) — Several academic workers from the University of California were issued citations while protesting in downtown Sacramento on Monday. The workers were cited while participating in a sit-in at a building on K St. in […]
SACRAMENTO, CA・1 DAY AGO
FOX40

SACRAMENTO, Calif. (KTXL) — The city of Sacramento and Sacramento Regional Transit are partnering to provide free rides to and from a city-operated weather-respite center. According to the city, free rides will be provided to the Outreach and Engagement Center on 3615 Auburn Boulevard where a warming center is located. The free rides began Friday […]
SACRAMENTO, CA・5 DAYS AGO
FOX40

WEST SACRAMENTO, Calif. (KTXL) — Final election results show that West Sacramento will have an all-women city council.  According to a press release from the city, Verna Sulpizio Hull defeated Alex Hirsch in District 4 to replace councilmember Chris Ledesma, who is stepping down after serving on the council for 12 years.  Dawnté Early won […]
WEST SACRAMENTO, CA・6 DAYS AGO
FOX40

(KTXL) — On Saturday, agents from the California Department of Corrections and Rehabilitation Special Service Unit found a man who had walked away from the Solano County Delta Conservation Camp on Thursday, Dec. 1. According to CDCR, agents located and apprehended Raul Mejia, 22, in Los Angeles County. CDCR said that on Aug. 2, Mejia […]
LOS ANGELES COUNTY, CA・3 DAYS AGO
FOX40

SACRAMENTO, Calif. (KTXL) — A petition to block the creation of a statewide fast food labor council in California has gathered more than 1,000,000 signatures, campaign organizers said, but a complaint filed by a law firm representing a proponent of the council questions the validity of some of the signatures. Assembly Bill 257, also known […]
SACRAMENTO, CA・2 DAYS AGO
FOX40

County to commit more resources in Sacramento to address homelessness

SACRAMENTO, Calif. (KTXL) — Sacramento County will be supporting Sacramento with more behavioral health resources and shelter beds as part of a new agreement that focuses on addressing the homelessness crisis.  The agreement is for five years, and it calls for the city of Sacramento to take the lead in identifying where resources should be […]
SACRAMENTO, CA・6 DAYS AGO