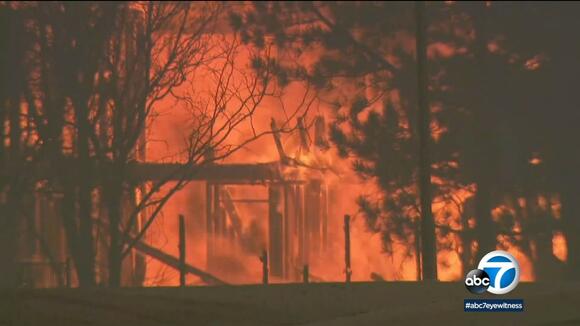 Thousands of residents in two communities near Boulder were ordered to evacuate Thursday because of a wind-fueled wildfire that engulfed parts of the area in smoky, orangish skies. The city of Louisville, which has a population of about 21,000, was ordered to evacuate after residents in Superior, which has 13,000 residents, were told to leave. The neighboring towns are roughly 20 miles (32 kilometers) northwest of Denver. The blaze was one of several that started in the area Thursday, at least some sparked by downed power lines, as winds gusted up to 105 mph (169 kph), according to the National Weather Service. Videos taken by residents showed buildings on fire, though officials had yet to provide any information. They were scheduled to speak at a news briefing Thursday evening Six people who were injured in the fires were being treated at UCHealth Broomfield Hospital, spokesperson Kelli Christensen said. A nearby portion of U.S. Highway 36 also was shut down. Colorado's Front Range, where most of the state's population lives, had an extremely dry and mild fall, and winter so far has continued to be mostly dry. Snow was expected Friday in the region though. One video captured by a bystander outside a Superior Costco store showed an apocalyptic scene with winds whipping through barren trees in the parking lot surrounded by gray skies, a hazy sun and small fires scattered across the ground. Leah Angstman and her husband saw similar dark skies while returning to their Louisville home from Denver International Airport after being away for the holidays. As they were sitting on the bus going toward Boulder, Angstman recalled instantly leaving clear blue skies and entering clouds of brown and yellow smoke. "The wind rocked the bus so hard that I thought the bus would tip," she wrote in a message to The Associated Press.

Science shows that climate change is a factor in California's increased risk of wildfires.

The visibility was so poor that the bus had to pull over and they waited a half-hour until a regional transit authority van escorted them to a turnaround on the highway. There she saw four separate fires burning in bushes across the freeway, she said. "The sky was dark, dark brown, and the dirt was blowing in swirls across the sidewalk like snakes," she said. Angstman later ended up evacuating, getting in a car with her husband and driving northeast without knowing where they would end up. Vignesh Kasinath, an assistant professor of biochemistry at the University of Colorado in Boulder, evacuated from a neighborhood in Superior with his wife and her parents. Kasinath said the family was overwhelmed because of the sudden evacuation warning and anxious from the chaos while trying to leave. "It's only because I am active on Twitter I came to know about this," said Kasinath, who said he did not receive an official evacuation notice from authorities. The fires prompted Gov. Jared Polis to declare a state of a emergency, allowing the state to access disaster emergency funds. The evacuations come as climate change is making weather more extreme and wildfires more frequent and destructive, scientists say. A historic drought and heat waves have made wildfires harder to fight in the U.S. West.

california and oregon went through this two years ago, our hearts and prayers go out to colorado, may god be with you.

Monday kicks off week of cooler temps in SoCal

Southern California will feel a bit more like the winter holiday season as cold temperatures and some snow and rain may resume later in the week.
ORANGE COUNTY, CA・2 HOURS AGO
ABC7

Los Angeles International Airport was expecting Sunday to be the busiest day of a long Thanksgiving weekend.
LOS ANGELES, CA・9 HOURS AGO
ABC7

A balloon that got trapped in power lines Saturday triggered sporadic outages at the Los Angeles International Airport, resulting in over a dozen calls of stuck elevators.
LOS ANGELES, CA・1 DAY AGO
ABC7

The average price of a gallon of self-serve regular gasoline in Los Angeles County dropped for the 17th consecutive day, decreasing to its lowest amount since March 3.
ORANGE COUNTY, CA・14 HOURS AGO
ABC7

Another round of Santa Ana winds pushed through Southern California on Thanksgiving, causing some communities to have their power shut off amid concerns of possible wildfires.
SANTA ANA, CA・3 DAYS AGO
ABC7

A 15-year-old boy was found dead after an SUV plowed into a South Los Angeles liquor store and erupted in flames.
LOS ANGELES, CA・6 HOURS AGO
ABC7

Surveillance video captured a Thanksgiving shooting in Costa Mesa that left one person dead and four others wounded, and police say road rage may be to blame for the incident.
COSTA MESA, CA・1 DAY AGO
ABC7

Eight people have been displaced from their homes after a fire broke out at a two-story multi-family residential building in Irvine.
IRVINE, CA・7 HOURS AGO
ABC7

Retailers are warning consumers to start looking for a Christmas tree early, because the supply this year is more limited and pricier than usual.
2 DAYS AGO
ABC7

A dog in Los Angeles has officially been recognized by Guinness World Records as the oldest living dog in the world.
LOS ANGELES, CA・2 DAYS AGO
ABC7

Man wanted in summer shooting of 2 tourists in Venice identified

Authorities have identified a man wanted in a July shooting in Venice that left two tourists from the United Kingdom seriously wounded.
LOS ANGELES, CA・2 DAYS AGO
ABC7

The president of the Fernandeño Tataviam Band of Mission Indians, a historic tribe of northern Los Angeles County, spoke with ABC7 on why Native sovereignty is multifaceted.
2 DAYS AGO
ABC7

Five people were under arrest Saturday following two separate pursuits in Southern California, one of which ended with police recovering a machete and a wig from a stolen vehicle.
LOS ANGELES, CA・1 DAY AGO
ABC7

Suspect in Costa Mesa Thanksgiving shooting that left 1 dead, 4 others injured turns himself in

A man who was named a suspect in a Thanksgiving shooting that left one person dead and four others injured in Costa Mesa has turned himself in, authorities said.
COSTA MESA, CA・2 DAYS AGO
ABC7

If you're cited or arrested for involvement in a street takeover, your car will be impounded, LAPD says. The cost to get your car out of the impound could reach $2,500.
4 DAYS AGO
ABC7

In April, a Santa Monica family opened their home to a family of Ukrainian refugees amid turmoil in their country. Now, after months of learning from one another, Thanksgiving Day brought them even closer.
SANTA MONICA, CA・2 DAYS AGO
ABC7