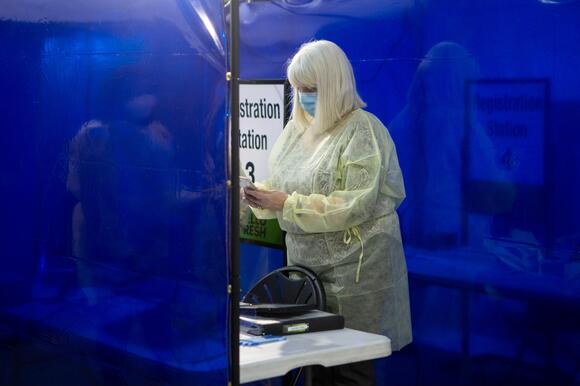 Quebec Premier Francois Legault said the curfew will be in effect 10 p.m. to 5 a.m. as of Friday night and will run for an indefinite period.

“It’s an extreme action to take because the situation is extreme,” Legault said.

Quebec imposed a nightly curfew for the pandemic last Jan. 9 and did not lift the measure until May 28. It has been the only Canadian province to order a curfew over the coronavirus.

Beginning Friday, Quebec restaurants are limited to providing takeout service and indoor private gatherings are banned. Gyms bars and other entertainment venues have been closed since last week.

In addition, schools at all levels won’t reopen to in-person classes until at least Jan. 17. Places of worship cannot open except to hold funerals, which will be limited to 25 people.

In Ontario, classes had been scheduled to resume Monday but that was pushed back to Wednesday.

The province's chief medical officer, Dr. Kieran Moore, said the extra days would give schools time to provided N95 masks to staff and deploy 3,000 more HEPA filter units in addition to the 70,000 already put into use.

Ontario has set several records for daily coronavirus infections in quick succession, with the latest peak of 13,807 reported Thursday.

Moore also said the province is reducing the isolation period for those who test positive for the virus to five days from 10 following the onset of symptoms for those who are vaccinated as well as for children under 12. He said the change is ``based on growing evidence that generally healthy people with COVID-19 are most infectious in the two days before and three days after symptoms develop.″

Alberta also reported a big jump in new virus cases, with 4,000 infections identified in the previous 24 hours. It was the second day in a row the province set a high for new cases, with 2,775 logged Wednesday.

Flu levels are continuing to rise in England, amid warnings that vaccine take-up among young children and pregnant women remain below that in previous years.Infection rates are estimated to be highest among five to 14-year-olds, with 18.5% of laboratory samples from this age group testing positive, according to the UK Health Security Agency (UKHSA).Some 10.5% of samples from all age groups tested positive in the week to November 27, up from 8.5% the previous week.Hospital admission rates are highest for children under five and adults aged 85 and over, at 6.9 per 100,000 people.https://mobile.twitter.com/NHSEngland/status/1597244422697418754Overall levels of flu are still estimated...
1 HOUR AGO
The Independent

New Zealand’s health service is applying for the guardianship of a sick four-month-old baby after its parents refused to use blood from vaccinated donors for the child’s open-heart surgery.The couple spoke with anti-vax campaigner and conspiracy theorist Liz Gun, who posted a video of the conversation on social media, from the hospital room. The couple said their baby urgently needs open-heart surgery and that they want the blood to come from people who have not received the Covid vaccine.The four-month-old baby has severe pulmonary valve stenonis, the parents said. Surgery is needed “almost immediately”, said the parents, but added that...
1 DAY AGO
The Independent

Emergency local council help for families in crisis has been slashed to just 98p per head, with one-quarter of authorities axing schemes altogether.New research by poverty campaigners has exposed how badly funded and “chaotic” local welfare schemes are failing to reach residents in need, even as the cost of living crisis grows.It reveals that help with emergencies such as a lack of clothing or furniture, or a broken washing machine, has plunged by a quarter to only 98p per head in England – with one Conservative-run authority spending just 2p.In stark contrast, councils in Scotland allocated £9.42 in 2021-22,...
1 HOUR AGO
The Independent

Ministers are reportedly considering changing the law to allow Channel migrants to be held at the Manston processing centre for up to 96 hours.The change would allow migrants to be held for three or four days – up from the current statutory limit of 24 hours – to give officials more flexibility in the event of another surge in Channel arrivals, according to The Daily Telegraph.Almost 44,000 migrants have crossed the Channel to the UK so far this year.The Ministry of Defence said a further 426 people were detected in eight boats on Wednesday.The site remains at acceptable capacity levels...
2 HOURS AGO
The Independent

China’s military said it dispatched a ship to the South China Sea to guide away a US cruiser that “seriously violated” its security and sovereignty and accused Washington of being a “security risk maker” in the region.On Tuesday, China’s military said a US cruiser that “illegally intruded” into waters near the Spratly Islands in the South China Sea was closely monitored and then guided away.“The actions of the US military seriously violated China’s sovereignty and security,” said Tian Junli, a spokesperson for the Southern Theatre Command of the People’s Liberation Army.He added that the US cruiser’s intrusion showed Washington...
WASHINGTON STATE・2 DAYS AGO
The Independent

The United Nations’ highest court found little to rule on Thursday in a long-running dispute over a small river which flows from Bolivia to Chile as the Latin American neighbors had mostly resolved their conflict during the 6-year proceedings. The International Court of Justice spent most of the hour-long hearing announcing the legal claims over the Silala River - a short waterway in the Atacama Desert - were “without object” as both countries now agreed on how the water system should be managed. “It is an international watercourse, as both parties now agree,” the court’s president, U.S. judge Joan...
2 HOURS AGO
The Independent

Rail union boss Mick Lynch and Scotland’s transport minister have urged Westminster to step in to help avoid strikes in the run up to Christmas.The Rail, Maritime and Transport union’s general secretary and Jenny Gilruth agreed they would urge the UK Government to help find solutions to the Network Rail pay dispute – which threatens to bring misery to passengers this festive season – at a meeting in London on Thursday.The Holyrood minister warned that, despite state-owned firm ScotRail agreeing a pay deal with workers earlier this year, the network north of the border “still faces severe disruption as a...
46 MINUTES AGO
The Independent

Just four Afghan refugees have been brought to safety in the UK since the fall of Kabul, Home Office figures show. The Afghan citizens’ resettlement scheme (ACRS) aimed to allow 5,000 Afghans into the country in the first year and 20,000 people long term. But while 6,314 refugees who are already in the UK have been granted indefinite leave to remain, only 4 people who fled Afghanistan after the Taliban takeover have been resettled.Charities have condemned ministers for “abandoning the Afghan people” and effectively closing any safe routes to the UK for those at-risk abroad. The Independent’s Refugees Welcome...
25 MINUTES AGO
The Independent

Royal Mail has clashed with the main union representing postal workers as they staged another strike in the long-running dispute over jobs, pay and conditions.The company said it has written to Dave Ward, general secretary of the Communication Workers Union (CWU), claiming a pattern of “wholly unacceptable behaviour” on picket lines across the country.The union strongly denied the allegations, insisting that picketing since the start of strikes has been peaceful.Royal Mail said more than 100 allegations of incidents including violence and harassment have been reported over the four months of the CWU’s industrial action, with 35 cases reported to the...
1 HOUR AGO
The Independent

UK on track for warmest year ever after mild autumn

The third-warmest autumn on record means 2022 is on firmly on track to be the hottest year ever in the UK.The UK would need a December of near-record cold weather to avoid this year being the warmest on record, according to Met Office statistics.Provisional figures show autumn – September, October, and November – were the third warmest on record for the UK, with an average temperature of 11.1C, topped only by 2011 and 2006’s autumn figures. The records go back to 1884.In addition, November continues 2022’s run of every month being warmer than average, with the first 11 months...
50 MINUTES AGO
BuzzFeed

"If I Can Do This, You Can Do This" — An American Woman Froze Her Eggs In London For 1/3 Of The Cost

"Egg freezing is an option for those that think they want to have children one day but aren’t ready right now," Brittany Allyn said. "I think it’s such a special opportunity our generation has that allows us to take back some control in our fertility."
13 MINUTES AGO
The Independent

South Korea said it used its fighter jets as a tactical measure after two Chinese and six Russian warplanes entered its air defence area on Wednesday.South Korea’s joint chief of staff (JCS) said the Chinese H-6 bombers repeatedly entered and left the Korea Air Defence Identification Zone (KADIZ) off South Korea’s southern and northeast coasts starting around 5.50am, reported Reuters.At 6.44am, the jets re-entered the zone from an area northeast of South Korea’s southern port city of Pohang and exited the zone at 7.07am, reported Yonhap.At 12.18pm, six Russian aircraft, including four TU-95 bombers and two SU-35 fighters along...
WASHINGTON STATE・1 DAY AGO