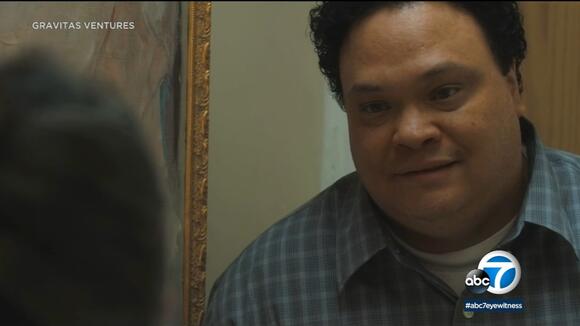 Adrian Martinez is a familiar face in movies and on television. Now, he is seeing a dream come true as writer, director, producer and star of the new movie, "iGilbert." Martinez plays Gilbert Gonzalez in the drama. He's 39, he lives with his mom and he feels invisible. When asked if he ever felt that way, his answer: "Absolutely, 100%." "And this is the movie for anyone who's ever felt that way, who has always gone through life saying, 'Listen, you don't get me' or you're walking through the streets and you feel utterly invisible. I mean, we've all had that Gilbert moment." Martinez continued. "This movie is really about connection and given the world we're in now, I really feel it's super important to talk about it." His character, Gilbert, is having trouble connecting. Instead, he finds himself recording women on his cellphone and fantasizing about his neighbor, the one woman he loves. Martinez has been working as a character actor for about three decades. He wrote "iGilbert" 10 years ago, eventually using his money to truly make it happen. "I moved the money from savings to checking, which I don't recommend. I do not recommend doing that anymore. I told my kid, 'Listen, the good news is that I'm making a movie and the bad news is you're not going to college.' So we'll see how it plays out," Martinez joked. Besides acting, Martinez was a landlord in New York City. He sold his property to finance his dream. He said he took a deep breath and jumped in. "When you're at this price point," he said of his movie budget, "the big special effect is the human heart. It really is the emotional life of these characters." Martinez is now working on a TV pilot. He's also written another movie and he says there's more to come. "Oh, I'm cooking, man. I'm cooking," he said. "iGilbert" debuts on iTunes on Friday. It's rated R for language.

Gary Friedkin, an actor who had roles in movies like “Star Wars” and “Young Doctors in Love,” and the TV show “Happy Days,” has died, according to the Tribune Chronicle. Friedkin, 70, died Dec. 2 from COVID-19 complications, according to his family. In Friedkin’s...
16 MINUTES AGO
ABC7

Oscar winning actress Octavia Spencer has a new honor to add to her long list of achievements. Spencer saw her star unveiled Thursday on the Hollywood Walk of Fame.
LOS ANGELES, CA・17 HOURS AGO
Parade

Tina Tuner’s son, Ronnie, has passed away. His wife, Afida Turner, revealed the news on Instagram. He was 62. “My god Ronnie turner a true angel hiuge [sic] soul highly spiritual my husband my best friend my baby iyour [sic] mummy your nurse i did the best to the end this time i was no [sic] able to save you love u for this 17 years this is very very very bad i am very mad 😡,” she captioned the post, which included several photos of Ronnie throughout the years.
13 MINUTES AGO