"We had a great week," Santa Fe basketball head coach Glen Banks said. "A lot of good basketball. I'm happy that it's my first year coaching and we actually make it to the championship game."

Santa Fe (8-5), which finished the tournament 2-1, met the Trinity Catholic Celtics (13-2) in the championship game on Thursday night at the Legacy Park Multipurpose Center in a game that saw Trinity Catholic run off with a 61-43 win over the Raiders. 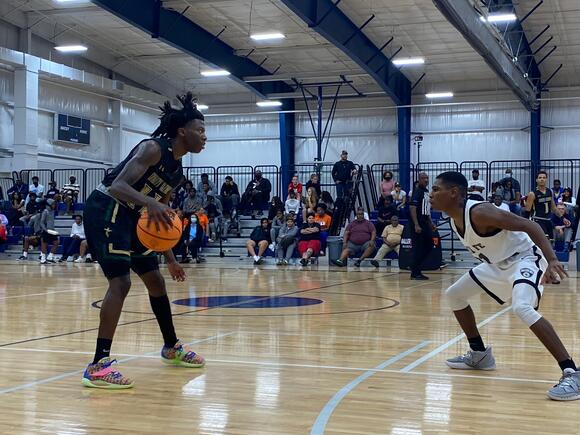 The Celtics orchestrated a 12-0 run in the opening minutes of the game, creating a hole too big for the Raiders to ever dig themselves out of.

Trinity Catholic got help from four different scorers early as seniors Elijah Russell, Jeremiah Russell, Chris Heard and junior Greg Maxwell each found the basket in the first minutes of the game.

Jumping out early has been common for the Celtics, according to Trinity Catholic head coach Carlos Villalobos.

"We've done that the last three or four games and kinda relaxed," Villalobos said. "So we talked about it at half time and told the guys, 'Once again, we get up early and relax. We gotta stop doing that and play a complete game.'."

When looking at Trinity Catholic's roster, what you see is what you get: a lot of size.

"Yeah, they got size... but they aren't quick," Banks said. "The size in the beginning was a factor, and then I think in the middle of the game, our quickness kinda balanced us out and we got back in the game."

In the back half of the first quarter, Santa Fe junior Dontrell Jenkins began to find his rhythm and dropped two three balls, with one coming from well behind the arc.

"The thing about (Jenkins) is that he's going to get his," Villalobos said of Jenkins. "We're just trying to control him as much as we could and we did a pretty good job for the most part."

After battling back into the game and cutting the deficit to to just five, the Raiders were looking to fight back in the second half.

Russell, who stands 6-7 and recently committed to play football for Marshall University, is not only tall, but the future Division I football player is also very strong.

Elijah Russell's 13 points were the second-most for the Celtics, who were led by senior Ashton Lovette with 14 points.

Trinity Catholic finished with all five of its starters in double digits.

Meanwhile, down the stretch, the Raiders found themselves in foul trouble, giving the Celtics opportunities to capitalize at the foul line.

Trinity Catholic is finishing up a stretch that featured eight games in 10 days. Fortunately for the Celtics, they get an 11-day break before returning to action on Jan. 11 when they host P.K. Yonge for a 7:30 p.m. tipoff.

Meanwhile, Santa Fe will return to the hardwood on Jan. 4 when they host Lake City Columbia at 7:30 p.m.