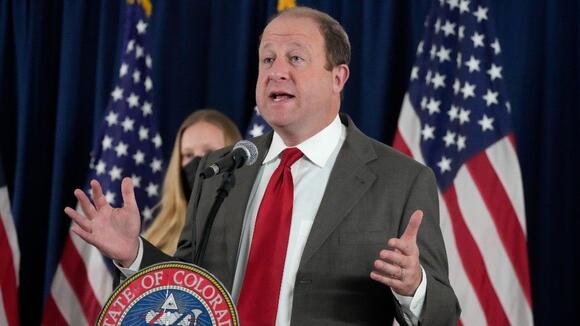 Colorado Gov. Jared Polis (D) on Thursday commuted the 110-year sentence of the truck driver involved in a crash that killed four people, calling the sentence that was handed down "highly atypical and unjust" and reducing it by 100 years.

In October, a jury found Rogel Aguilera-Mederos, 26, guilty on 27 counts relating to the incident in which his truck crashed into stopped traffic on I-70, killing four people and injuring at least 10 others. Aguilera-Mederos told the court that his brake had failed before the crash.

Aguilera-Mederos was sentenced to 110 years in prison due to mandatory minimum sentencing laws in Colorado. The sentence drew international outcry for its severity, with fellow truck drivers boycotting Colorado in protest.

As KDVR reported, Aguilera-Mederos applied for clemency from Polis, which the Colorado governor granted on Thursday, cutting his sentence down to 10 years.

"I believe you deserve clemency for several reasons," Polis wrote. "You were sentenced to 110 years in prison, effectively more than a life sentence, for a tragic but unintentional act. While you are not blameless, your sentence is disproportionate compared with many other inmates in our criminal justice system who committed intentional, premeditated, or violent crimes."

Polis stressed that the crimes Aguilera-Mederos was convicted of are "serious," but said he was "encouraged" by the "personal reflection" the defendant had done as well as "the commercial vehicle safety changes" that were made in light of the crash.

"While you have begun the process of taking accountability and recognizing the mistakes that led to this tragic event, I strongly encourage you to take additional responsibility for your actions by seeking restorative justice opportunities to address your obligations to those who suffered loss and to repair the needs of the community due to your carelessness," said Polis.

This was one of the worst miscarriages of justice all of us has ever seen. All you have to do is look at the facts to see he didn't deserve that ridiculous jail sentence. With that said, thoughts go out to the families of the accident victims as this was probably a difficult blow. And this poor guy will have a traumatized life no matter what now.

Good, but even 10 years is too long. Maybe 5years with time off for good behavior.

An Indiana doctor who gained national attention for providing an abortion to a 10-year-old rape victim from Ohio over the summer dropped her lawsuit against Indiana’s attorney general on Thursday. A state judge last week rejected Dr. Caitlin Bernard’s request to block Indiana Attorney General Todd Rokita’s (R) investigation into her over several consumer complaints…
INDIANA STATE・14 HOURS AGO
The Hill

Story at a glance Missouri is the latest state to legalize possession of marijuana for recreational use, joining 20 other states, Washington D.C., and Guam in legalizing the drug.  Although it is now legal to possess up to 3 ounces of marijuana in Missouri, recreational sales of the drug will not begin until medical facilities…
MISSOURI STATE・16 HOURS AGO
The Hill

The Florida state legislator who sponsored the bill that became known as the “Don’t Say Gay” bill has resigned after he was indicted for pandemic-era loan fraud.  State Rep. Joe Harding (R) said in a statement posted on his Facebook page on Thursday that he is resigning effective immediately, saying that Floridians’ leaders should not…
FLORIDA STATE・9 HOURS AGO
The Hill

Story at a glance Increased access to contraceptives for women in Colorado was associated with more women receiving their bachelor’s degrees, according to new data from the University of Colorado.  Findings published in the journal Health Affairs detail the effects of the Colorado Family Planning Initiative, a program first introduced in 2009.  Researchers assessed data…
COLORADO STATE・17 HOURS AGO
The Hill

Virginia’s air quality board on Wednesday voted to leave an interstate emissions-reduction partnership, bringing the state closer to fulfilling Gov. Glenn Youngkin’s (R) vow to withdraw from the program earlier this year even as critics say the process needs legislative approval. The state Air Pollution Control Board voted 4-1 to continue the exit from the…
VIRGINIA STATE・13 HOURS AGO
The Hill

House Republicans in the Texas delegation on Thursday released a framework of proposals to curb the migration surge at the southern border. The four-pronged plan aims to “Complete Physical Border Infrastructure,” “Fix Border Enforcement Policies,” “Enforce our Laws in the Interior” and “Target Cartels & Criminal Organizations.” Specifically, measures proposed include resuming the building of…
TEXAS STATE・11 HOURS AGO
The Hill

Story at a glance New York Gov. Kathy Hochul (D) signed a bill into law Thursday expanding safety standards for electric space heaters almost a year after one of the machines sparked a deadly fire in the Bronx.    Under the law, electric space heaters sold in New York state are required to be equipped…
BRONX, NY・11 HOURS AGO
The Hill

Watch live: Biden delivers remarks on the economy from Arizona

President Biden on Tuesday will deliver remarks on how his economic plan is leading to a manufacturing boom, rebuilding supply chains and creating well-paying jobs in Arizona and across the country. He is visiting Taiwan Semiconductor Manufacturing Company, the world’s largest contract manufacturer of chips. The company is slated to announce the construction of a…
ARIZONA STATE・2 DAYS AGO
The Hill

Nebraska Gov. Pete Ricketts (R) on Tuesday announced he’ll try for the appointment to replace outgoing Sen. Ben Sasse (R) and represent the state in the U.S. Senate, according to local outlets.   “For me, it came down to a single question: How can I best serve the people of Nebraska and advance our conservative…
NEBRASKA STATE・2 DAYS AGO
The Hill

Senate Democrats on Thursday introduced a bill that would help fund expenses for women who need to travel to undergo abortion procedures.   “Right now in states across the country, Americans are unable to make their own health care decisions. Women in states like Wisconsin are being forced to travel out of state just to…
WISCONSIN STATE・16 HOURS AGO
The Hill

Florida Gov. Ron DeSantis (R) has overtaken former President Trump in a hypothetical 2024 match-up for the GOP presidential nomination, according to a new Yahoo News-YouGov poll.   The nationwide poll, released Thursday, shows DeSantis with a 5-point lead over Trump, with 47 percent of registered voters backing the governor compared to 42 percent for…
FLORIDA STATE・16 HOURS AGO
The Hill

Campaign Report — Georgia on our minds

Welcome to The Hill’s Campaign Report, tracking all things related to the 2022 midterm elections. You can expect this newsletter in your inbox every Tuesday, Wednesday and Thursday leading up to November’s election.    I’m Madeleine Simon, The Hill’s deputy campaign editor, taking over today for our special Georgia runoff edition. Someone forward this to you? Subscribe here. All eyes on…
GEORGIA STATE・2 DAYS AGO
The Hill

Christian Walker on criticism of father: ‘I did what I had to do’

Christian Walker, the son of defeated Georgia Republican Senate nominee Herschel Walker, says that he has no regrets about publicly criticizing his father during the campaign, saying, “I did what I had to do.” In an interview with BuzzFeed News published Wednesday, Walker said he had no regrets about the series of tweets he sent…
GEORGIA STATE・19 HOURS AGO