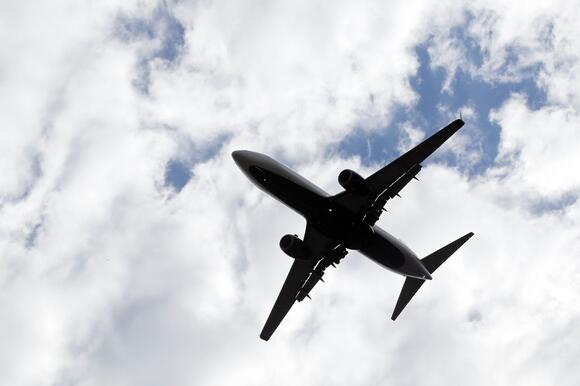 The Federal Aviation Administration (FAA) on Thursday warned that travelers can expect more flights to be canceled as the omicron variant continues to surge around the country, The Wall Street Journal reports.

By midday Thursday, nearly 1,200 flights in the U.S. had been nixed and about as many cancelations were already planned for Friday.

"Like the rest of the U.S. population, an increased number of FAA employees have tested positive for COVID-19. To maintain safety, traffic volume at some facilities could be reduced, which might result in delays during busy periods," an FAA spokeswoman told The Hill.

Other factors have also contributed to delays and cancelations, she added.

"Weather and heavy seasonal traffic are likely to result in some travel delays in the coming days."

JetBlue on Thursday canceled 175 flights, 17 percent of those scheduled, and the airline plans to cancel more than 1,200 flights stretching into mid-January. United Airlines, Delta Air Lines and Southwest Airlines canceled 93 flights, 250 and 15 flights by midday, respectively.

"There may be additional cancels each day based on how sick calls are trending and general staffing challenges, but we hope this proactive reduction will minimize same-day cancels and lessen the inconvenience to our customers," a JetBlue spokesman told the Journal.

Many airlines are resorting to offering incentives to bribe workers to log overtime hours during the chaotic holiday travel season.

"We have negotiated holiday incentives to help with operational challenges, but there’s only so far you can stretch people," Sara Nelson, international president of the Association of Flight Attendants-CWA (AFA), said in a statement to Reuters.

China reiterates ‘no first use’ policy in wake of US report

China’s defense ministry reiterated its commitment to a “no first use” nuclear weapons policy on Tuesday, after a Pentagon report last week suggested that Beijing is on pace to nearly quadruple its nuclear arsenal in just over a decade. “It should be emphasized that China firmly pursues a nuclear strategy of self-defense, adheres to the…
1 HOUR AGO
The Hill

Neuralink, the medical device company owned by Elon Musk, is under investigation from a federal agency for alleged animal welfare violations, Reuters reports. The U.S. Department of Agriculture (USDA) Inspector General’s office opened the probe at the request of a federal prosecutor, Reuters reported, citing sources. Investigators are reportedly looking at potential violations of the…
CALIFORNIA STATE・3 HOURS AGO
The Hill

Rochelle Walensky, director of the Centers for Disease Control and Prevention (CDC), warned of extremely high levels of respiratory illness in the U.S. on Monday, particularly flu hospitalizations, and made another call for people to stay up to date on their vaccinations. In a briefing, Walensky said the U.S. is seeing elevated levels of COVID-19,…
22 HOURS AGO
The Hill

A major United Nations summit on biodiversity will kick off on Tuesday in Montreal, where co-hosts Canada and China will have to overcome diplomatic differences on behalf of the environment.   The summit, known as COP15, comes “with the lofty goal” of getting every nation to agree to protect nearly one-third of global lands and oceans…
CALIFORNIA STATE・20 HOURS AGO
The Hill

Rail workers warn of exodus after Congress forces through deal

Railroad workers could leave the industry after Congress forced through a contract that does not provide them any paid sick days, an exodus that would ripple through an economy reliant on freight railroads to transport goods. The exit of thousands of train conductors and engineers would be felt by major corporations and U.S. consumers alike.…
IOWA STATE・7 HOURS AGO
The Hill

Is the clock ticking for TikTok?

As someone from the boomer generation, I continue to be surprised and amused at the growing role social media plays in modern discourse. Younger generations can’t seem to go more than a few minutes without it. Two of the media giants in the field are TikTok and Twitter, neither of which I use directly, which…
WASHINGTON STATE・6 HOURS AGO
The Hill

Delta Air Lines reached a deal with union negotiators to increase pay for pilots by more than 30 percent over four years. The airline company and the Air Line Pilots Association (ALPA) reached an “agreement-in-principle” on Friday that amounts to $7.2 billion in cumulative value over four years, according to an email obtained by CNBC.…
4 HOURS AGO