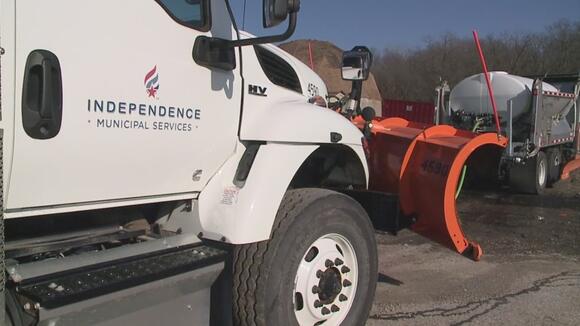 INDEPENDENCE, Mo. — Engines are warming up. This weekend’s expected winter weather has public works departments filling up their trucks with salt and brine and prepping their snow plows.

Kansas City area communities are preparing for the first major snow of the season.

Zan McKinney, with the City of Independence, said the city is about one-third down on staffing from where they really need to be. But he’s prepared to run 12-hour shifts for four days, if needed, after having to select and train some city employees as new plow drivers.

“Where this hurts us the worst is when we get into those Level 3 streets, those local traffic residential areas,” McKinney said. “It takes us so much more time to get to those areas that people have already started driving on it. It hard packs that snow.”

In Kansas City, Missouri, leaders said they confronted low head count early on. City Manager Brian Platt said 50 more trucks will be on the streets with around 100 new drivers.

“It’s just a question of finding those who drive trucks for their daily jobs and know how to drive trucks and training them appropriately,” Platt said.

Hopes are high in Olathe. The city’s street maintenance department has roughly 20 new operators, all of whom have never plowed snow streets.

But they’ll be ready to clear 1,400 lane miles this weekend.

“We’re pretty well caught up,” said Chad Courtois, Olathe’s street maintenance supervisor. “We’re still a little short of where we’d like to be. We believe in our snow plan, our employees and our snow programs. I don’t think people will see a drop in level of service. We’re pretty confident we can handle the storm.”

The plan in all these metro cities and others is straightforward: clear the streets efficiently before winter whirls out of control.

One man seriously injured in fire in Kansas City’s Northland

With a flip of the switch Country Club Plaza was turned into a picture perfect winter wonderland, complete with fireworks.
KANSAS CITY, MO・1 DAY AGO
FOX4 News Kansas City

Small Business Saturday: Where to shop local in the Kansas City area

No matter where you live in the Kansas City metro, here are a few neighborhoods filled with small businesses to check out.
KANSAS CITY, MO・20 HOURS AGO
FOX4 News Kansas City

Temperatures weren't the only thing above average. So are inflation and production costs for the City Market's more than 100 vendors.
KANSAS CITY, MO・15 HOURS AGO
FOX4 News Kansas City

Thanksgiving travel predicted to return to near pre-pandemic levels

The expected 49 million Americans traveling by car would mark 98% of pre-pandemic numbers. An extra 4.5 million people flying equals 99% of those who flew for Thanksgiving in 2019.
KANSAS CITY, MO・2 DAYS AGO
FOX4 News Kansas City

Things to do in Kansas City on Thanksgiving weekend Nov. 24-27

What to know as peak eagle-watching season nears in Missouri

The Missouri Department of Conservation announced a new slate of 'Eagle Days' events earlier this week. In the later stages of fall, thousands of eagles migrate south from their nesting range in Canada and the Great Lakes states to hunt in Missouri.
MISSOURI STATE・3 DAYS AGO
FOX4 News Kansas City

The Kansas City Streetcar Holiday Jam returns with live music on board a special Holiday Streetcar, at streetcar stops and at the City Market.
KANSAS CITY, MO・1 DAY AGO
FOX4 News Kansas City

Your business might have problems when your former customers have devoted an entire Facebook page to ripping you apart.
KANSAS CITY, MO・2 DAYS AGO
FOX4 News Kansas City

Lawrence re-evaluating homeless campsite for use in winter months

A temporary homeless camp set up by the city of Lawrence may not be as temporary as once expected.
LAWRENCE, KS・2 DAYS AGO
FOX4 News Kansas City

Fort Osage Farm has been running for 20 years under Bob and Kim Luke and they admit when they first took over, it was a new adventure.
INDEPENDENCE, MO・2 DAYS AGO
FOX4 News Kansas City

More than 5,000 people sign up to test new KCI terminal

More than 5,000 people across the Kansas City metro have already volunteered to help test out the new terminal at KCI before it opens to the public.
KANSAS CITY, MO・3 DAYS AGO