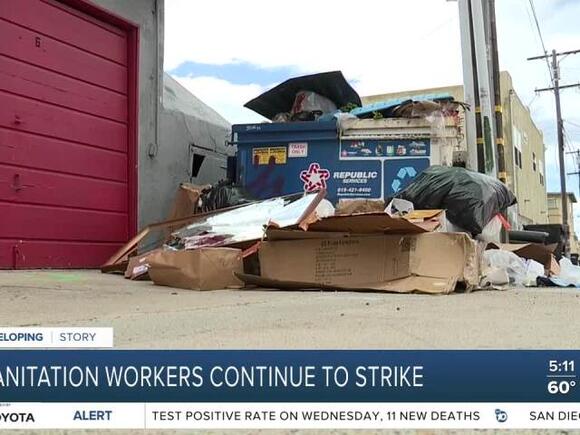 The City of San Diego is now asking residents and businesses dealing with trash piling up to contact the company directly to request a pick-up.

The company has set up an email account to address collection requests by customers impacted by the strike; that address is CustomerServiceSD@RepublicServices.com .

Republic Services also tells ABC 10News, “For those with an urgent issue, we encourage customers to contact Republic Services directly at 619-421-9400. We are operating on our regular residential trash collection schedule in Chula Vista with the help of our Blue Crew relief drivers and continue to make progress with servicing our customers.”

The City of San Diego said its Environmental Services Department had been inundated with phone calls from residents asking for their trash to be picked up.

“Residents that live in apartment complexes, condos, and have businesses that don’t get serviced by the City of San Diego, but they’re not aware of that, so they call us,” said Jose Ysea, a spokesperson for the city. “They can contact them directly to get trash picked up, and we really encourage them to do that.”

Ysea said the city worries about the trash overflow creating a public health concern. "You leave trash out it starts to rot, at night we have animals that come in and tear it apart," he said. "The other issue is all these rain events we've been having the trash gets into the storm drains."

More than 250 sanitation workers authorized a strike nearly two weeks ago. They’re asking for better wages and have not reached an agreement with the company.

“We’re all here for the same reason; we’re here for a better contract,” said Ricardo Gonzalez, a worker on the picket line in Kearny Mesa Thursday. San Diego isn’t cheap; we all have family, we all have bills to pay, and everything is increasing, so why can’t they increase our pay as well?”

Republic Services told ABC 10News they did not have anyone available for an interview Thursday but sent the following statement. “

Republic Services is encouraged that negotiations with the union resumed today. We continue to make progress with trash collection for our customers with the help of our Blue Crew relief drivers. We remain committed to bargaining in good faith in an effort to reach a fair agreement.”

Instead of opening their wallets for Black Friday, some San Diegan shoppers decided to make use of their finances with ‘Green Friday.’
SAN DIEGO, CA・2 DAYS AGO
ABC 10 News KGTV

As part of their strategy to end homelessness one person at a time, Father Joe's Villages uses food to set a foundation for reaching people in need.
SAN DIEGO, CA・2 DAYS AGO
ABC 10 News KGTV

TSA: Sunday after Thanksgiving is the busiest travel day of the year

Thanksgiving weekend is coming to a close. The Sunday after Thanksgiving is the busiest travel day for U.S. airports.
SAN DIEGO, CA・4 HOURS AGO
ABC 10 News KGTV

Hundreds of turkeys given away in National City

The Mayor of National City, Alejandra Sotelo-Solis, said this year is important because lots of National City residents are struggling financially due to the pandemic and other hardships.
NATIONAL CITY, CA・7 DAYS AGO
ABC 10 News KGTV

Ukrainian refugees reflect, give thanks on Thanksgiving holiday in SD County

Lifeguards helped six kayakers who had difficulty getting back to shore due to high winds off the coast in the La Jolla neighborhood Thursday, a San Diego Fire-Rescue department spokesman said.
SAN DIEGO, CA・3 DAYS AGO
ABC 10 News KGTV

Participants will be offered ownership of the e-bike following successful completion of the program, according to SANDAG.
SAN DIEGO COUNTY, CA・5 DAYS AGO
ABC 10 News KGTV

"Surprised at having a stranger make physical contact with him, plaintiff moved the flight attendant's arm away and told her that he would adjust his seat himself, which he immediately did."
SAN DIEGO, CA・4 DAYS AGO
ABC 10 News KGTV

The busiest travel days during Thanksgiving week are usually Tuesday, Wednesday and the Sunday after the holiday.
SAN DIEGO, CA・4 DAYS AGO
ABC 10 News KGTV

San Diego activists and others in the LGBTQ+ community reflect on tragedy in Colorado Springs. The deadly shooting claimed the lives of at least 5 people and injured at least 18.
COLORADO SPRINGS, CO・6 DAYS AGO
ABC 10 News KGTV

A man is recovering from serious injuries after he was seen on camera being brutally attacked by a group of homeless men in San Diego's Ocean Beach neighborhood last Friday night.
SAN DIEGO, CA・3 DAYS AGO
ABC 10 News KGTV

A man died and two others were recovering following a possible overdose incident at a Mission Beach home.
SAN DIEGO, CA・5 DAYS AGO
ABC 10 News KGTV

Man struck by ambulance on SR-94 in Lemon Grove

A pedestrian was rushed to the hospital early Tuesday morning after being struck by an ambulance on state Route 94 in Lemon Grove.
LEMON GROVE, CA・5 DAYS AGO
ABC 10 News KGTV

The average price of a gallon of self-serve regular gasoline in San Diego County was at its highest amount for a Thanksgiving Thursday despite dropping 46 of the past 50 days.
SAN DIEGO COUNTY, CA・3 DAYS AGO
ABC 10 News KGTV

Plenty of turkey trots are taking off in San Diego County this year on Thanksgiving and families can participate in these races before stuffing their faces with birds and all the fixings later.
SAN DIEGO COUNTY, CA・5 DAYS AGO