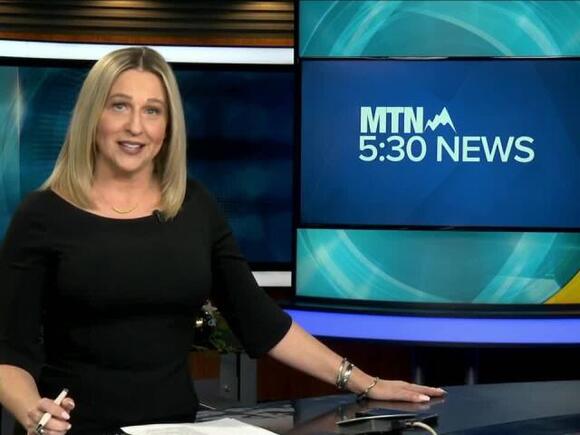 BILLINGS - After more than a decade on the Q2 news desk, news anchor Jeanelle Slade signed off Thursday night for the last time.

Slade was first hired at Q2 in 1996, less than a month after she graduated from the University of Montana School of Journalism.

Her first assignment had her at work at 2:15 a.m. every Monday through Friday on Q2's Daybreak, with Billings Anchor Laura Thornquist.

"What I learned from Laura is irreplaceable," Slade said. "But I also figured out in that first year I couldn't function with the early morning hours."

Slade went on to report Monday through Friday and eventually spent six years on the Q2 weekend anchor desk before transitioning to a local media relations and internal communications job at St. Vincent Healthcare.

In August 2011, TV called her back. This time, joining Jay Kohn, Bob McGuire and Scott Breen on the desk Monday through Friday at 5:30 and 10 p.m.

The team, along with a dedicated news crew, delivered the day's news and dominated the local ratings. Slade was named Montana Broadcaster of the Year five times during her tenure on the news desk.

The last few years have seen some major changes at Q2. Jay Kohn retired at the end of 2018 after decades with MTN News, and weatherman Bob McGuire followed in 2020.

As Kohn was transitioning out of his nightly anchor duties, Billings native Russ Riesinger came on to co-anchor with Slade on both Q2 evening newscasts, as well as a 9 p.m. show on the CW network.

When Covid struck in 2020 Q2 split the news anchor team, and transitioned sports into the field.

"Covid was hard for everyone, and news is no different," said Slade.

The veteran Montana news anchor signed off Thursday thanking her former colleagues and Q2 family. She expressed gratitude to the Q2 viewers over the years.

"Thank you for allowing us to bring you the days news, the breaking details and the stories that impacted your lives."

Slade became most choked up as she neared the end of her goodbye.

"And finally for those of you who allowed me to tell your stories, personal, difficult, inspiring, and even life-changing, you helped me grow, communicate, inform, and educate others across our community, state, and sometimes even beyond. Thank you."

Slade has no specific plans as she moves forward. Her husband and two Cockapoos are here in the family home, and her two daughters, born and raised in Billings, are now split between Montana State in Bozeman and the University of Montana in Missoula.

Editor Note: Please join us at Q2 in wishing Jeanelle all the best and enjoying these memories:

The Billings area Polar Plunge is set for Saturday, Dec. 10, at 2 p.m. in the REI parking lot at 711 Henry Chapple St. near the corner of King Avenue West and Shiloh Road.
BILLINGS, MT・1 DAY AGO
Q2 News

A big area of low pressure will influence almost all of the western U-S by late this weekend and well into next week. It will bring chillier days and snow to many.
BILLINGS, MT・1 DAY AGO
Q2 News

Is restaurant staffing better in Billings, or is this the new norm?

After Chick-fil-A announced it's looking to hire 130 employees for a new Billings location, we asked several Billings restaurants if staffing is getting easier or if shortages are the new standard.
BILLINGS, MT・10 HOURS AGO
Q2 News

After a relatively quiet weather weekend, confidence is increasing that colder temperatures and potentially heavy snow will take over next week. It could start late Sunday.
BILLINGS, MT・9 HOURS AGO
Q2 News

Chik-fil-A is in an area called the Marketplace, between Applebees and Planet Fitness near the intersection of 24th Street West and Rosebud Drive.
BILLINGS, MT・9 HOURS AGO
Q2 News

A woman told an officer she killed a man inside his South Side Billings home as part of an "initiation that the detective would not understand."
BILLINGS, MT・16 HOURS AGO
Q2 News

A nonprofit in Billings uses donations to bring awareness to the problem of missing indigenous people in Montana, and now the group has established a GoFundMe.
BILLINGS, MT・2 DAYS AGO
Q2 News

Living the fast food dream: Why a Billings woman stuck with Wendy's for 30 years

Jonna Jones, the director of marketing for Wentana, the Wendy's franchise owner in Billings, says hiring these days is hard.
BILLINGS, MT・7 HOURS AGO
Q2 News

More blowing snow is expected is expected near Big Timber on I-90 through Wednesday morning. Snow and slippery roads are a concern across northeast and eastern Montana Tuesday evening.
BILLINGS, MT・2 DAYS AGO
Q2 News

Pacific moisture is running over the top of colder air at the surface. This will create snow with bands of heavier snow through Tuesday.
BILLINGS, MT・4 DAYS AGO
Q2 News

Bond set at 20K for man shot outside Billings restaurant

Bond was set Thursday at $20,000 for a Billings man who was shot during a confrontation outside a restaurant.
BILLINGS, MT・17 HOURS AGO
Q2 News

Sharp’s had a store on Etsy for the past decade and opened her brick-and-mortar location, Montana Creatives Floral and Gifts, nearly three years ago.
ABSAROKEE, MT・7 DAYS AGO
Q2 News

A few flurries are possible today on what should be the coldest day of the week. Daytime highs move back above freezing tomorrow.
BILLINGS, MT・2 DAYS AGO
Q2 News

Laurel parents claim bullying is 'out of control,' pull children from classes

Many Laurel parents claim their children are being bullied at school and the schools are not doing anything about it.
LAUREL, MT・1 DAY AGO
Q2 News

The USS Pennsylvania carried Lamphear and hundreds of other servicemen across the pacific, attacking Japanese forces in places like Guam, Saipan, and the Philippines.
LAUREL, MT・1 DAY AGO
Q2 News

The first threat discovered on Nov. 30, was deemed "not substantial" by Billings police, but another threat was discovered on Tuesday.
BILLINGS, MT・2 DAYS AGO
Q2 News

A spokesperson explains Chronic Wasting Disease, among other reasons, did not allow for a safe relocation.
BILLINGS, MT・6 DAYS AGO
Q2 News

"It was pretty spooky, but I wasn’t going anywhere with my family in there," added Ferch, who was a customer that night.
BILLINGS, MT・7 DAYS AGO