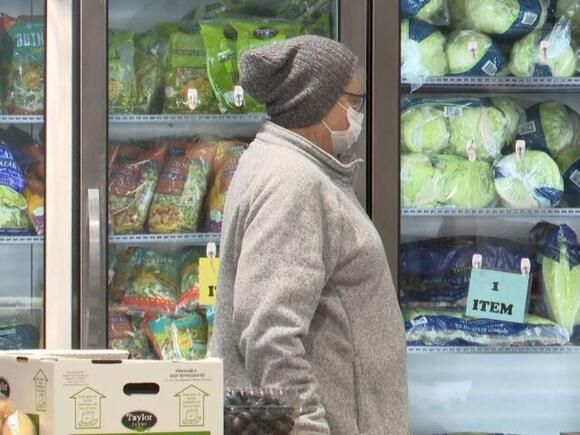 BILLINGS - It’s been a tumultuous year for many Montanans in the pandemic. A bright light in the middle of it all, organizations like the Billings Food Bank and Billings Family Service have been able to help people now more than ever.

“It’s a joy for us to be here,” said Director of Family Service Stacy Brown.

Food security has been an ongoing issue for many and COVID hasn’t helped. Billings Family Service has had a milestone year when it comes to helping families in need both locally and regionally.

“We have seen huge growth, not only people coming in and asking for assistance but also regionally,” Brown said.

Family Service has been able to expand to areas such as Mile City, Lewistown, Harlowton, and even as far as Cody, Wyoming. They plan on expanding even more after the first of next year.

“I think that this year, donation-wise, it’s just been remarkable,” Brown said.

“This year I will imagine that it will be half again as much if not more,” Brown said.

The pandemic has put a spotlight on the need for donations.

“COVID is part of the reason that we’ve had a good year because of the focus on hunger and food issues,” said Executive Director of the Billings Food Bank Sheryle Shandy.

The Billings Food Bank was able to serve almost 546,000 people over the last year.

That means the community of Billings donated nearly 50 million dollars worth of food to those in need.

Q2’s annual Turkey Tuesday, partnered with the Billings Food Bank, was also a record-breaking event. Not only did we see the largest number of turkeys ever donated, over $57,000 in monetary donations.

It’s been an unparalleled year, but Family Service and the Billings Food Bank still have a need.

“I think that that the particular needs right now are food and rental and utility assistance,” Brown said.

Shandy says that the Food Bank receives many canned goods and is looking for more fresh produce.

“We’re wanting to start to be able to give more fruits, fresh fruits, and vegetables to all of our clients,” Shandy said.

Both organizations are beyond appreciative to be a part of the Billings community. It’s one that never ceases to go beyond their expectations.

“I always want to say thank you to our supporters cause we don’t do it by ourselves,” Shandy said.

Veronica Zimmerman says a busy shopping weekend of Black Friday, Small Business Saturday and Cyber Monday is a little nerve wracking but worth it.
BILLINGS, MT・2 DAYS AGO
Q2 News

Medicine scarce in Billings due to shortages as flu season hits

Flu season has officially made its way to Montana, and this year it's even more frightening as many over-the-counter medications are unavailable due to shortages.
BILLINGS, MT・1 DAY AGO
Q2 News

Church-goers arrived at church Sunday morning to find a rock had been thrown through the window of the front door.
BILLINGS, MT・12 HOURS AGO
Q2 News

Downtown Billings was busy this Tuesday whether residents were out shopping or working, and that meant parking spaces were almost impossible to find.
BILLINGS, MT・12 HOURS AGO
Q2 News

After MTN News shared Tess’s video with FWP, they immediately sent a team out to check on the moose this Monday.
BILLINGS, MT・1 DAY AGO
Q2 News

It's a beautiful sight and sound for anyone that drives by Fuller Family Medicine this time of year, but for Brad Fuller it's about more than just Christmas lights.
BILLINGS, MT・3 DAYS AGO
Q2 News

Pigg said the city is experimenting with a new way of freezing the water this year by adding a sprinkler system into the mix.
BILLINGS, MT・12 HOURS AGO
Q2 News

While temperatures continue to bobble between cold and average, and chance of snow comes and goes. All all before we start the winter season.
BILLINGS, MT・13 HOURS AGO
Q2 News

But with the trend of online shopping, business at malls has declined as the storefront vacancies have ticked up by 10% around the country according to modernretail.
BILLINGS, MT・4 DAYS AGO
Q2 News

The maps are available for purchase as custom orders, and prices range from $100-$200 depending on size and wood type.
RED LODGE, MT・5 DAYS AGO
Q2 News

Warrior Wishes gets Thanksgiving dinners to veterans in Billings

Vetsgiving gave Thanksgiving dinners to veterans in Hardin, Red Lodge, Roundup, Laurel and Billings. It's all part of Warrior Wishes and it's about helping veterans.
BILLINGS, MT・7 DAYS AGO
Q2 News

Routine traffic stops in Billings ended with a Thanksgiving surprise for drivers Wednesday morning when the Billings Police Department gave out turkeys, not tickets.
BILLINGS, MT・6 DAYS AGO
Q2 News

A family home on Blue Creek Road just outside of Billings was shot Sunday afternoon, and although it was an accident, it doesn't mean that the family wasn't affected.
BILLINGS, MT・13 HOURS AGO
Q2 News

Monday evening, Aarberge was moved to the Billings Clinic Psychiatric center due to staffing shortages and low Medicaid reimbursement rates set by the state according to employees at Parkview.
BILLINGS, MT・7 DAYS AGO
Q2 News

According to the Consumer Product Safety Commission, there are more than 165,000 cooking fires in the United States every year, leading to around 200 deaths and 3,200 injuries.
BILLINGS, MT・6 DAYS AGO
Q2 News

It will be the coldest day of the week. Thursday will be the warmest. Chance of snow Thursday night into Friday.
BILLINGS, MT・1 DAY AGO
Q2 News

'One Class at a Time' surprises teacher at Broadwater Elementary

Mrs. Stanaway has a big heart and embodies what a loving, caring and innovative teacher should strive to be.
BILLINGS, MT・5 DAYS AGO
Q2 News

Lava Island, a Colorado-based trampoline park and playground, will be opening its doors in Billings in 2023.
BILLINGS, MT・6 DAYS AGO
Q2 News

Billings Public Schools sent a re-districting proposal to parents and guardians on Tuesday evening, and some neighborhoods are seeing their high school plans change.
BILLINGS, MT・6 DAYS AGO