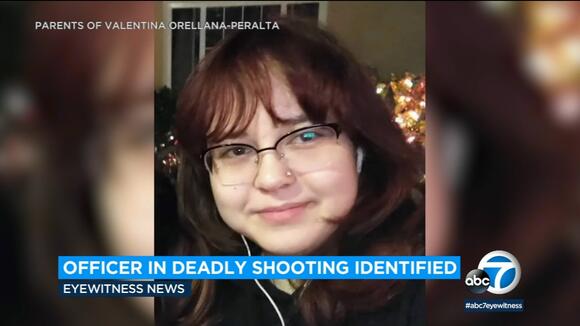 The Los Angeles Police Department on Thursday released the name of the officer involved in the shooting at a North Hollywood Burlington store that killed an assault suspect and a 14-year-old girl, who was struck by a stray bullet. The officer was identified as Officer William Jones, who was assigned to the LAPD's North Hollywood station, according to a department statement. The Los Angeles Police Department released no other immediate information. The girl was with her mother in a dressing room, trying on Christmas dresses, two days before Christmas, when she was struck by a police bullet that passed through a wall on the second floor of the Burlington store at 12121 Victory Blvd. MORE | Mother of teen killed by LAPD tearfully recounts shooting, aftermath

The parents of Valentina Orellana-Peralta, a 14-year-old girl who was fatally struck by an LAPD officer's stray bullet, spoke out at a news conference.

Valentina Orellana Peralta died in the arms of her mother, who said she and her daughter sat down and hugged when they heard the commotion in the store. The force of the gunshot that struck the teen threw them both to the ground, the girl's mother said. Los Angeles police on Monday released body-camera footage and other details of the shooting when officers responded to reports of a man assaulting people, and possibly firing shots, inside the Burlington store. The narrated video released by the LAPD includes footage showing the assault suspect viciously attacking a woman on the second floor of the Burlington store, repeatedly beating her with a steel or metal cable bike lock, leaving her bloodied on the floor as officers arrived. Body-camera video captures the sound of police gunfire quickly ringing out as officers spot the suspect -- with the cable lock in his hand. More than a half-dozen officers descend on the suspect after the shots are heard, and the injured suspect is taken into custody. The assault suspect, 24-year-old Daniel Elena Lopez, was later pronounced dead at the scene. 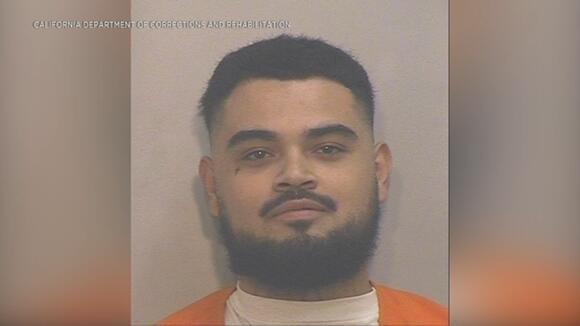 California Department of Corrections and Rehabilitation

While the video shows the suspect with the cable lock in his right hand, there is no indication he is armed with a gun, and it is unclear if he advanced on any officers before the shots rang out. Police have said no gun was found at the scene. The video released by the LAPD Monday includes audio from a series of 911 calls. In one call, a store employee tells a dispatcher a suspect is in the store attacking people with a bike lock. In another, a woman reports the sound of shots being fired in the store, saying there's "a guy with a gun.'' Another caller reports that her mother was hiding inside the store because of a man making threats. She added, "I don't know if he has a gun, I don't know what he has, but they're hiding.'' A GoFundMe page established to benefit the teen's family had raised nearly $30,000 by midday Tuesday. MORE | LAPD releases bodycam video of fatal shooting at Burlington store

The Los Angeles Police Department has released body camera footage of a shooting that killed a 14-year-old girl at a Burlington store in North Hollywood.

19-month-old girl abducted by her mother in the San Fernando Valley, LAPD says

A Virginia deputy duct-taped a Riverside family, killed them and set their home on fire, then fled with their teen daughter before fatally shooting himself, officials said Wednesday.
RIVERSIDE, CA・18 HOURS AGO
ABC7

Riverside murders: Family of victims expected to speak out Wednesday during press conference

Relatives of a family who was found murdered after a house fire in Riverside the day after Thanksgiving will be speaking out following the release of new details surrounding the killings.
RIVERSIDE, CA・11 HOURS AGO
ABC7

One of the daughters of Los Angeles Mayor-elect Karen Bass was injured in a hit-and-run crash, Bass said.
LOS ANGELES, CA・3 HOURS AGO
ABC7

"Catfishing led to the deaths of the three most important people in my life."
RIVERSIDE, CA・19 HOURS AGO
ABC7

An Upland man was arrested after he allegedly beat his wife to death, left her on the side of a road and then abandoned his young daughter at a gas station.
UPLAND, CA・1 DAY AGO
ABC7

A 19-month-old girl has been found safe and her mother was arrested after she allegedly abducted the child in the San Fernando Valley, authorities confirmed Thursday.
LOS ANGELES, CA・11 HOURS AGO
ABC7

Authorities have released video that captured the dramatic ending to a wild pursuit in Riverside County.
RIVERSIDE COUNTY, CA・2 DAYS AGO
ABC7

The murders of a husband and wife and their daughter in Riverside allegedly stemmed from a catfishing incident involving the teenage daughter of one of the victims, police said.
RIVERSIDE, CA・2 DAYS AGO
ABC7

Palmdale teen's family files suit against school district after he fell out of truck on campus, died

The family of a high school student filed a lawsuit against the Antelope Valley Union High School District after he fell out of the bed of a moving pickup truck in a campus parking lot and died.
PALMDALE, CA・2 HOURS AGO
ABC7

A body was found on a roadside in the Santa Monica Mountains north of Malibu, prompting the closure of Mulholland Highway, authorities said.
MALIBU, CA・6 HOURS AGO
ABC7

The family of a slain El Monte police sergeant and their attorney on Tuesday announced a $25 million legal action against the Los Angeles County district attorney and the county over the sergeant's death.
EL MONTE, CA・2 DAYS AGO
ABC7

Stolen car crashes into pickup truck, sends it barreling toward motorcyclist in Malibu

Dramatic video captured the moment when a pickup truck involved in a violent crash along the Pacific Coast Highway in Malibu flipped on top of an innocent motorcyclist.
MALIBU, CA・1 DAY AGO
ABC7

A neighbor who called 911 to try to help a 15-year-old girl in Riverside describes witnessing the suspect with the young girl before her family's home erupted in flames.
RIVERSIDE, CA・3 DAYS AGO
ABC7

Rachel Castillo, a Simi Valley mother of two, was reported missing after her sister found a bloody scene at their home. Castillo's remains were later found in a remote location in the Antelope Valley.
SIMI VALLEY, CA・3 DAYS AGO
ABC7

Burglars stole thousands of dollars in merchandise from a San Pedro shoe store that was set to reopen this week after closing for the pandemic.
LOS ANGELES, CA・5 HOURS AGO
ABC7

The Los Angeles Police Department has served search warrants in its investigation into the leaked conversation that led to the City Hall racism scandal, to determine if the conversation was recorded illegally.
1 DAY AGO
ABC7

A 15-year-old boy was found dead after an SUV plowed into a South Los Angeles liquor store and erupted in flames.
LOS ANGELES, CA・4 DAYS AGO