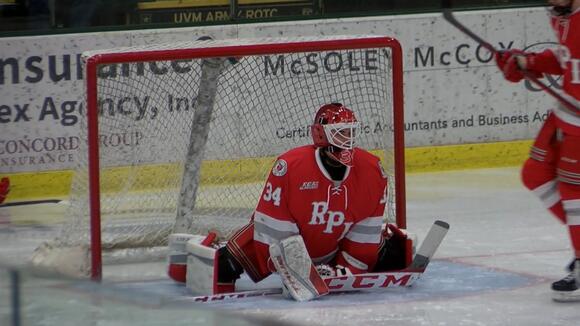 BURLINGTON, Vt. – Senior Ottoville Leppanen recorded a goal and an assist to lead the Rensselaer Polytechnic Institute (RPI) men’s hockey team to a 3-2 victory over the University of Vermont, on Thursday afternoon at Gutterson Fieldhouse. With the win, the Engineers improve to 9-11-2 overall, while the Catamounts drop to 3-12-2.

Vermont scored on the first chance of the game, when freshman Jesper Tarkiainen stuck home a rebound after Luke Mountain drove the net out of the right corner. The marker, which came at 2:28 of the first, was the first of Tarkiainen’s career.

The Engineers then battled their way back over the remainder of the opening frame, scoring twice to take a 2-1 lead.

At 15:36, senior captain Ture Linden buried a centering feed from Leppanen to tie the game at 1-1. Junior Ryan Mahshie claimed the secondary helper on the play.

Four minutes later, junior defenseman Simon Kjellberg snapped home his fourth goal of the season from just inside the left circle to give the visitors a 2-1 advantage. Senior Jakub Lacka found junior Rory Herrman breaking into the zone, before he slid the puck across to the left side for Kjellberg’s one-time finish.

Leppanen pushed the RPI lead to 3-1 at 4:43 of the second period, when he corralled a rebound behind the Vermont net and banked a shot off the back of Catamounts netminder Gabe Carriere and into the net. The tally, which was Leppanen’s fifth goal of the year drew assists from Mahshie and sophomore Jack Agnew .

Rensselaer freshman goaltender Jack Watson helped withstand a late period push from the hosts and wound up stopping all 12 shots he faced in the middle stanza.

The Engineers had chances to extend their lead in the third, but could find a way past Carriere for a fourth time.

Vermont did pull to within one on a power play tally by Joe Leahy at 16:34 of the period. His shot from between the circles beat Watson to make it a 3-2 game. Vermont then lifted Carriere for an extra skater with 1:40 remaining, but RPI was able to hold on, allowing just one shot on target.

Watson (1-1) finished with 29 saves to earn his first collegiate victory between the pipes. Carriere (3-4-2) had 24 stops at the other end of the ice. The Catamounts finished 1 for 2 on the power play, while the Engineers went without a man advantage opportunity for the first time since November 1, 2014 – a 2-1 win over then-No. 2 Union College at the Houston Field House.

RPI now has back-to-back wins in Burlington for the first time since 2002.

The Engineers are back on the ice on Sunday, when they visit Army West Point for a 2pm puck drop. Vermont travels to Holy Cross on Tuesday (7pm).

The University at Albany men's basketball team came roaring back in the second half against a tough Florida Atlantic team, but ultimately fell on Saturday afternoon, 56-73.
BOCA RATON, FL・18 HOURS AGO
NEWS10 ABC

Not much was expected of the Warrensburg/North Warren Central/Lake George football team in its' first year as a combined unit. The Wolverines were selected to finish in just fourth place in the Section II, Class C North Division. But Mike Perrone's squad not only exceeded expectations this season, they soared past them.
WARRENSBURG, NY・18 HOURS AGO
NEWS10 ABC

The last time the Cambridge/Salem football team reached the NYSPHSAA Class D championship game was 2017. Doug Luke's squad went on win that game, claiming their third state title. And now they'll have a chance for No. 4 next weekend after knocking off Section VII foe Moriah 47-22 Friday night in the state semifinals.
SALEM, NY・1 DAY AGO
NEWS10 ABC

Dominant run game leads the way for the Wolverines

The Lake George/Warrensburg/North Warren Wolverines have been absolutely rolling in their first year as a combined unit. They put up 85 points in their regional championship win over Gouverneur. Now they look to punch their ticket to the state finals.
WARRENSBURG, NY・2 DAYS AGO
NEWS10 ABC

Ravena-Coeymans-Selkirk and Section I's Pleasantville are no strangers to each other. The Panthers bounced the Indians from state title contention in last year's state semifinals with a 15-7 victory. The two combatants met once more in the semis Saturday, but again, Pleasantville had Ravena's number, winning 14-6 in another defensive slugfest.
PLEASANTVILLE, NY・18 HOURS AGO
NEWS10 ABC

Ole Miss opened the second half connecting on 11 of their first 13 shots to amass 28 points over the initial 8:03 of the stanza to defeat Siena Basketball 74-62 in the ESPN Events Invitational Semifinals at the State Farm Field House. Javian McCollum established a new career-high with 24 points and tied his career-best with eight assists for the second straight day to lead the Saints.
OXFORD, MS・1 DAY AGO
NEWS10 ABC

Part of the journey is the end, and the journey the Niskayuna football team took fans on this season was a remarkable one. In a year of firsts for the Silver Warriors - first section title, regional championship, and first 10-win season in the program's first trip to the playoffs since 2010 - their bid for a first state title appearance fell short Friday night in a 35-7 loss to reigning Class A state champion Somers out of Section I.
NISKAYUNA, NY・1 DAY AGO
NEWS10 ABC

The viral video has been seen by over half a million people. It shows two runners colliding at the finish line of the Troy Turkey Trot, one of the nation's oldest road races. 22-year-old Jack Huber was running his first Turkey Trot after some steadfast training at other area runs of the season. He says he never experienced a race like this.
TROY, NY・20 HOURS AGO
NEWS10 ABC

The 75th annual Troy Turkey Trot has come and gone, and the winners of the Thanksgiving day staple are in.
TROY, NY・3 DAYS AGO
NEWS10 ABC

According to a new report by EmpireStakes.com, a sports betting information website, New York is the third best state to become a doctor. Specifically, the website found the odds of becoming a professional physician, an orthopedic surgeon, and your chance of graduating medical school in each state.
ILLINOIS STATE・2 DAYS AGO
NEWS10 ABC

Capital Region Toys for Tots has had a more challenging year than usual, but they are working tirelessly to meet a big need for holiday gifts.
CLIFTON PARK, NY・9 HOURS AGO
NEWS10 ABC

Police are investigating what they called a "serious motor vehicle crash" near the intersection of Ontario and Bradford Streets in Albany Friday night.
ALBANY, NY・1 DAY AGO
NEWS10 ABC

5 things to know this Black Friday

Happy Black Friday! Whether you're out shopping or staying at home for the day, we're anticipating a few showers this morning, according to Meteorologist Rob Lindenmuth's weather report. Otherwise, it'll remain mostly cloudy, still on the mild side, but things will turn a bit breezy into the afternoon behind a cold front.
COLORADO STATE・2 DAYS AGO
NEWS10 ABC

Saratoga Pride and the Unitarian Universalist Congregation of Saratoga Springs are holding a remembrance for the victims of Club Q in Colorado Springs. The vigil will be held on Sunday, November 27 at 4:30 p.m.
SARATOGA SPRINGS, NY・1 DAY AGO
NEWS10 ABC

WASHINGTON (AP) — State-level law enforcement units created after the 2020 presidential election to investigate voter fraud are looking into scattered complaints more than two weeks after the midterms but have provided no indication of systemic problems. That’s just what election experts had expected and led critics to suggest...
FLORIDA STATE・1 DAY AGO
NEWS10 ABC

The Metropolitan Church hosted a Thanksgiving basket gifting this year providing Thanksgiving dinner for the community. The church provided over 600 families with food for the giving holiday.
ALBANY, NY・1 DAY AGO
NEWS10 ABC

Latest Forecast Update from Meteorologist Steve Caporizzo: It was really a nice Saturday…..perfect start to the weekend. It won’t be that way Sunday afternoon/night. Temps today averaged 5-10 degrees above normal. Another winner of a day….temps 5-10 degrees above normal. High for Albany 54 Surface Maps….Awesome weather today and night….High Pressure moving off the East […]
ALBANY, NY・1 DAY AGO
NEWS10 ABC

ALBANY, N.Y. (NEWS10) — This week on Empire State Weekly, the New York Education Department has required all public schools to remove and replace all mascots, team names, and logos with Native American imagery. Schools that do not comply are at risk of having school officers removed and state aid withheld. Shannon Shine, the Superintendent […]
NEW YORK STATE・2 DAYS AGO