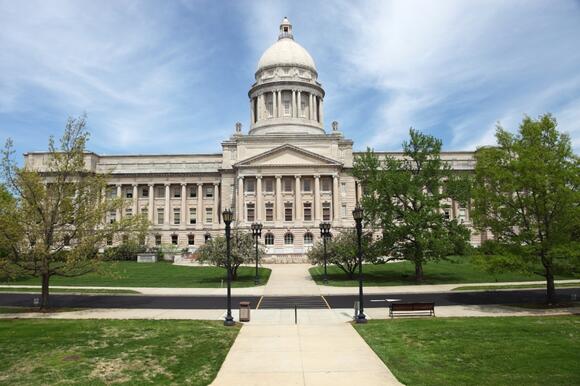 Redistricting takes place every ten years, and while it is a highly politicized debate, it has real impacts on the voters and who will be representing their areas.

The 10 Republicans most likely to run for president

Redistricting gives residents a voice directly with their community representatives on matters of their district including taxes, public school systems, highways and infrastructure, security, and health care.

“The Kentucky Constitution requires that we rebalance our legislative districts to reflect those most recent citizens, and reflect the changes, since the previous census,” Osborne said.

In May 2021, The U.S. Census Bureau announced that Kentucky’s population increased by over 158 thousand residents in the past ten years.

“We’ve seen dramatic shifts from far eastern Kentucky and far western Kentucky to the metropolitan areas,” Osborne said. “This proposal is committed and attained the ultimate objective of meeting all legal considerations and constitutional requirements.”

Fayette County was heavily impacted by the shifts in population. Many Lexington residents left to Jessamine County, causing it to expand its number of districts. But Fayette County also had much to consider with respect to its high minority population.

“It’s always painful, but always necessary,” Representative George Brown Jr. (D) of House District 77 in Fayette County said. “People have to understand that the census matter. Politics and government matter. It affects portions of how money from the federal government is going to be spent. It affects jobs, health care, like how we’re going to respond to Covid-19 policies and help the people providing health care services; security, public education, and the margins are going to be close.”

Confederate statue in Danville moved to museum in Meade County To get in contact with Representative Brown about the redistrciting changes to District 77, call 1-800-372-7194 or email george.brown@lrc.ky.gov.

The re-drawing of the lines is first determined by local governments.

“They are the ultimate arbiters of communities of interest. They understand their communities the best,” Osborne said.

Based on their joint effort, the following changes were announced:

2. Hopkins, Henderson, and Barren Counties are now single county districts, meaning their district is completely within those counties.

3. The number of times Hardin and Oldham Counties were divided decreased.

5. The two districts with the most increase in minority influences are House Districts 30 (Jefferson County) & 77 (Fayette County).

The GOP gleaned off of several resources, including The Supreme Court, to properly figure out the redistricting lines. Their objective was to figure out how to fit 120 counties into 100 districts.

By using what’s known as district compactness scores, and only allowing a five percent variation for each district line to be drawn, the GOP believes their proposed redistricting map has achieved equal representation.

But the redistricting changes came with much difficulty, and Osborne said that was due to Kentucky’s Constitution being in violation of the Federal Voting Rights Act, which protects minorities from discriminatory voting practices.

Osborne said that the redistricting map proposal was shown to the NAACP to vet for voting rights act issues, and President Raul Cunningham was “pleased with the process.”

Osborne also said that Governor Andy Beshear has had visibility with the proposed map.

Osborne said that the GOP has been in a unique position. For the first time in Kentucky’s history, the same caucus controls both the House and Senate.

“We only have one time to do it the first time,” Osborne said.

Currently, no map has been shared with the public officially, and critics are holding the GOP accountable by saying there was not enough input from voters.

Dee Pregliasco, Chairman of Redistricting at The League of Women Voters of Kentucky (LWV), said their organization had run a parallel process to help with the redrawing of the district lines.

“We proposed the process be open, and be public and transparent; that the public has a chance to comment. When the GOP didn’t have these public hearings over the state, we did nine fair map forums over the state to get public input and redrew our own set of public maps,” Pregliasco said.

LWV was able to attend legal meetings and listen in on the same calls as the GOP, but they worked separately in hopes of achieving the most accurate and up-to-date scale of the population.

The difference between the two research was that the GOP’s factored in incumbents, while LWV’s did not.

There were claims from the GOP that LWV violated the voting rights act in their process, but Pregliasco said that the LWV map drawer is an attorney, and they paid close attention to the Voting Rights Act and all the legal rules; one person one vote.

“I’ve asked, how did we violate, with what we did, the voting rights act?” Pregliasco said. “Now it only really affects two major communities, Louisville and Lexington, because the minority population is so little, so it doesn’t affect other parts of the state, except for Hopkinsville. So I’ve asked them for that and we don’t have a specific answer for that yet.”

Pregliasco said their approach to voters has been to simply educate them; especially when it came to knowing if their own district lines were gerrymandered by the GOP, and to have the resources to submit any feedback to their respective district representative, or through the LWV website.

“Be the good guys, be the good government guys, and don’t have any gerrymandering,” Pregliasco said.

If you would like to do so, click the following link: Redistricting Fair Maps — League of Women Voters of Kentucky (lwvky.org)

The bill will be filed on Tuesday, January 4, and will proceed to enter a five-day process going before Governor Beshear for review, as well the public for input.

The Senate is currently working on the congressional maps and will be introducing them on Tuesday as well.

“I think that you see a more thoughtful, a much more complete map that is done within the context of being representative of Kentucky,” Osborne said.

Pregliasco believes that a five-day window won’t be enough time.

“What we saw today from Republican House leaders is an attempt at fake transparency.  If they were sincere, they would have not released their redistricting plan on a state holiday and without the detailed information the public needs.

“Citizens and candidates alike won’t have that information online until late Tuesday, less than two days before the entire House votes.  That gives them precious little time to absorb the many changes and then offer input, something that goes against the very hallmark of the legislative process.

“We will be reviewing this map further with our caucus members and discussing whether the Republican map meets all legal and constitutional guidelines.  We also are preparing an alternative that we believe will better serve the commonwealth.

“It is vital to remember that whatever is ultimately decided will be in place for a decade.  The last thing we should be doing as a legislature is rushing something so important and so long-lasting.  Kentuckians deserve more time so we can get this right.”

A Kentucky man has been convicted of strangulation and domestic violence, three years after he was one of hundreds pardoned during former Kentucky Gov. Matt Bevin's last days in office.
KENTUCKY STATE・9 HOURS AGO
FOX 56

A Democratic lawmaker whose resume includes ministry work and a career in the military announced Monday that she will run for Kentucky attorney general next year.
KENTUCKY STATE・3 DAYS AGO
FOX 56

Statewide farm cash receipts this year are projected to approach $8 billion, easily surpassing the 2021 record-high of $6.9 billion, according to a team of University of Kentucky ag economists.
KENTUCKY STATE・9 HOURS AGO
FOX 56

The public is giving its last goodbye to former Gov. John Y. Brown Jr. The normally bustling and busy Capitol grounds took on a more quiet, solemn, and somber mood Tuesday afternoon that was lifted by the smiles of colleagues from over the years.
KENTUCKY STATE・3 DAYS AGO
FOX 56

Sen. Yates said he sponsored the bill because the problem had gotten so bad, there were reports of organized crime rings stealing packages.
KENTUCKY STATE・7 HOURS AGO
FOX 56

Kentucky has said its final farewell to Gov. John Y. Brown Jr. A private service was held Wednesday at the State Capitol as loved ones remembered the moments that made Brown’s life one well lived.
KENTUCKY STATE・2 DAYS AGO
FOX 56

There were big steps taken today to avoid a nationwide rail strike, set for next week. The issue is a particular concern in the Appalachian coal states.
KENTUCKY STATE・2 DAYS AGO
FOX 56

Cameron said the audit investigations will generally be looking for cases of electioneering or bribery.
KENTUCKY STATE・4 DAYS AGO
FOX 56

Gov. Andy Beshear has instructed the Department of Juvenile Justice to open a female-only detention center in Campbell County, furthering his pledge to keep youth in custody safe and secure.
CAMPBELL COUNTY, KY・1 DAY AGO
FOX 56

When the expansion is complete, Little Sandy Correctional Complex in Elliott County will house 1,882 male inmates and be second-largest state prison in Kentucky, officials said.
KENTUCKY STATE・2 DAYS AGO
FOX 56

In addition to visiting schools across the Commonwealth and preparing to compete at Miss America, Hannah Edelen is now juggling a new role as a public servant.
KENTUCKY STATE・3 DAYS AGO
FOX 56

Kentucky may not be the first state that comes to mind when thinking about pizza, but a restaurant in Louisville is putting its name on the map.
LOUISVILLE, KY・1 DAY AGO
FOX 56

Officials said “grandparent scams,” also known as “person-in-need scams,” involve perpetrators making false claims to victims that their loved one is in jeopardy and in need of money that the perpetrator will use to assist the loved one.
MEADE COUNTY, KY・3 DAYS AGO
FOX 56

A nonprofit from the Sunshine State has raised money to help out the family of a fallen officer here in the Bluegrass.
LONDON, KY・4 DAYS AGO
FOX 56

Kentucky among states with lowest credit scores, according to study

A recent WalletHub study ranked states' average credit scores based on TransUnion data as of October 2022.
KENTUCKY STATE・4 DAYS AGO