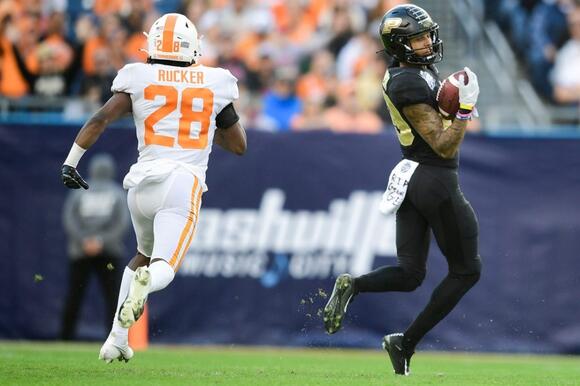 Aidan O’Connell threw for 534 yards and five touchdowns and Mitchell Fineran kicked a 38-yard field goal in overtime as Purdue nipped Tennessee 48-45 on Thursday in a thrilling Music City Bowl in Nashville.

In a game where the teams combined for 1,290 total yards, the Boilermakers (9-4) got the last laugh against the Volunteers (7-6) thanks to a dynamic passing attack. O’Connell found Broc Thompson seven times for 217 yards and two touchdowns, while Payne Durham collected five catches for 85 yards and two scores.

Tennessee’s Hendon Hooker matched O’Connell with five TD passes and threw for 378 yards without an interception. Cedric Tillman registered seven catches for 150 yards and three touchdowns, Velus Jones Jr. had 10 catches for 85 yards and a score, and Jabari Small ran for 180 yards and a touchdown for the Volunteers.

Tennessee got the ball first in overtime and went for it on fourth-and-goal from the 1. However, Jaylen Wright was stood up at the goal line and the whistle blew before he was able to reach the ball across. That gave Purdue a chance to win, and Fineran snuck his kick inside the left upright.

The teams combined for four touchdowns in the final five minutes of the fourth quarter.

O’Connell began the wild sequence by throwing a pass to Durham, who spun away from three defenders, stayed inbounds and bolted for a 62-yard touchdown. The duo connected on the ensuing two-point conversion to give the Boilermakers a 38-31 lead.

However, the Volunteers tied it less than 1 1/2 minutes later. Small’s 60-yard run set up Hooker’s TD pass to Tillman on fourth-and-goal from the 13.

That deadlock lasted only 40 seconds, as O’Connell hit Thompson for a 70-yard go-ahead score with 2:57 to play. But Hooker and Princeton Fant quickly hooked up on a 58-yard completion to set up Hooker’s game-tying 2-yard TD strike to Jalin Hyatt with 1:35 remaining.

Each team had one more possession in regulation, but Purdue punted on its trip and Tennessee’s 56-yard field goal came up short.

The Boilermakers led 23-21 at the break before the teams jockeyed back and forth in the third quarter.

Tennessee regained the lead on Jones’ 15-yard catch-and-run, and then O’Connell and TJ Sheffield connected on a stellar 10-yard pitch-and-catch into the end zone to put Purdue back in front, 30-28. Chase McGrath’s 30-yard field goal flipped the scoreboard once again, giving the Volunteers a 31-30 edge at the end of three quarters.