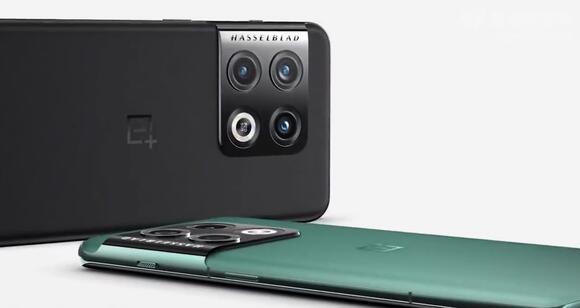 OnePlus has been pushing forward the release date of its flagships in recent years, with the OnePlus 9 series arriving in March 2021 . That’s a lot earlier than any of its predecessors and in line with the timetable of other vendors. Next year, the OnePlus 10 series will arrive even earlier than that. The first OnePlus 10 Pro teaser just dropped, seemingly confirming the phone’s big camera redesign . But it’s not just the OnePlus 10 Pro camera that appears in the video, as the company also teases the phone’s launch date.

In previous years, the Chinese smartphone maker released a flagship handset in the first half of the year and a second, updated version of that phone in the second half. By bringing the OnePlus 10 Pro launch closer to the start of 2022, OnePlus can put more distance between the first flagship of 2022 and the second.

However, OnePlus did not have a OnePlus 9T in stores this year. The ongoing chip shortage might be the explanation for that. The OnePlus reorganization under Oppo could be another. Or maybe the fact that OnePlus now makes mid-range devices and flagships is a good enough reason to avoid a “T” model this year. It’s likely a combination of factors that convinced OnePlus not to make the OnePlus 9T.

Whatever the case, the OnePlus 10 Pro will arrive much earlier than usual if this teaser is accurate. That doesn’t necessarily mean that OnePlus will have a OnePlus 10T in stores in the second half of 2022, though.

OnePlus has already been teasing that the OnePlus 10 phones will arrive earlier than usual. And we saw plenty of leaks detailing the OnePlus 10 Pro design and specs . It’s the usual dance we witness every year in the months preceding the launch of the new OnePlus hardware.

We get a glimpse at the hole-punch curved display on the front. The clip also shows the triple-lens camera on the back that comes with Hasselblad branding and a metal casing. The teaser also shows two different colors for the handset, including black and green.

OnePlus will probably confirm these OnePlus 10 Pro launch details in the coming days, as January 10th is almost upon us.

Early this year, DSCC Ross Young and Bloomberg‘s Mark Gurman reported that Apple was planning to create a mix of a foldable MacBook or foldable iPad in the future as the company started experimenting with two touchable displays. A report indicates that the Cupertino firm has prompted the development project of a 20-inch foldable device.
12 HOURS AGO
BGR.com

First released by the end of October 2020, a new special edition of the Beats Flex is being announced. This time, the not-so-wireless earbuds got a leopard print to match the Japanese fashion brand WACKO MARIA. This edition will be available starting this Friday in select stores. Here’s what you need to know.
6 DAYS AGO
BGR.com

‘Can’t innovate anymore, my ass!’ New site can search for any moment in an Apple event

Some Apple events are more memorable than others. For example, who could ever forget when Steve Jobs introduced the first iPhone? “An iPod, a phone, an internet mobile communicator… these are not three separate devices,” said the Apple founder in 2007. Now, a website is gathering the most Apple Keynotes it can, alongside other popular shows, and bringing transcripted versions of the presentations.
5 DAYS AGO
BGR.com

Microsoft could be looking to take on Facebook and Discord with its new Communities feature for Microsoft Teams. Today, the company launched the new Communities feature, which will be available to everyone for free. It will allow users to use the calendar, meeting, and chat features of the communication service in order to create groups.
6 HOURS AGO
BGR.com

With nearly 90 million subscribers, there’s no denying that Apple Music has become a legit success for Apple. And while you’d be hard-pressed to find any Spotify users who would even entertain the notion of jumping ship, Apple continues to slowly but surely add new features to its music subscription service. Most recently, Apple announced a new feature dubbed Apple Music Sing.
1 DAY AGO
BGR.com

Have you seen our guide on all the Black Friday deals that Amazon forgot to end? If not, you’re really missing out. Of course, there are also so many other great sales happening now that Christmas is right around the corner. This big roundup is packed full of our...
1 DAY AGO
BGR.com

Disney Plus releases teaser for its massive weapon against Netflix

Disney Plus scored a big win against Netflix a few months ago when it announced that the K-pop group BTS would develop original content for Disney. They revealed three titles at the time, including BTS: Permission to Dance On Stage and two shows: IN THE SOOP: Friendcation and BTS MONUMENTS: Beyond the Star.
6 DAYS AGO
BGR.com

Ultimate BTS streaming guide: Where to watch the band’s best series and documentaries

BTS might be on a temporary pause at the moment — as the group’s seven members launch solo projects and prepare to stagger their mandatory military enlistments, per South Korean law — but the collective nevertheless remains the biggest pop group in the world. For proof, we could point to everything from the buzz surrounding group leader RM’s newly released solo debut Indigo to the staggering breadth of BTS content available to stream all over the internet.
3 DAYS AGO
BGR.com

A couple of weeks after the latest beta, Apple is seeding iOS 16.2 beta 4 to all developers. While the company “skipped” a week due to the Thanksgiving holidays, it’s now back in full swing with the latest beta of its future operating systems. Here’s what you need to know about iOS 16.2 and the other software versions.
6 DAYS AGO
BGR.com

Apple Car Keys is one of the most exciting features of the iPhone’s Wallet as it shows how close we are to having our smartphone as our only device. Although the number of cars that currently support Apple’s authentication to unlock vehicles and drive is very limited, the company released with iOS 16.1 the ability to share Car Keys with other devices. Now, Google Pixel owners are the first non-iPhone models to get a shared key. Here’s how it works.
6 DAYS AGO
BGR.com

You can now see everything your Meta Quest Pro sees in your video recordings. Today, Meta announced a number of updates for the Meta Quest Pro, its new mixed-reality headset. One of the new features announced is background audio which will allow users to play their favorite music while they get some work done or play games with friends.
5 DAYS AGO
BGR.com

macOS Ventura 13.1 will make it easier to find a lost AirTag

Last week, Apple seeded the latest macOS Ventura 13.1 beta build. While the main focus of this update is on the Freeform app and improvements to Stage Manager, there’s a tweak in the Find My app that has been there for at least a year. Now, it’s easier to find an AirTag using your Mac.
17 HOURS AGO
BGR.com

Proton Drive, launched in September as a web-based-only app, is releasing its iPhone and Android application to all users today. With that, it’s easier for Proton clients to use encrypted cloud storage with its services and share data on mobile. Here’s what you need to know. According to...
18 HOURS AGO
BGR.com

JBL has a long history of delivering high-end, great-sounding headsets, and in recent years it has built many of the best wireless earbuds out there. Now, the company is back with a fresh pair that are specifically targeted at gaming, in the JBL Quantum TWS wireless earbuds. Earbuds aren’t commonly...
1 DAY AGO
BGR.com

The iPhone 14 Pro is out of stock right now, and it’ll be a miracle if you can order one in time for Christmas. But those people who already own the handset should know about a brilliant built-in trick they might not know about. It’s not a must-have feature, and it’s a trick that you’ll rarely use. But it’s exciting nonetheless. The iPhone 14 Pro and Pro Max can instantly measure a person’s height.
2 DAYS AGO