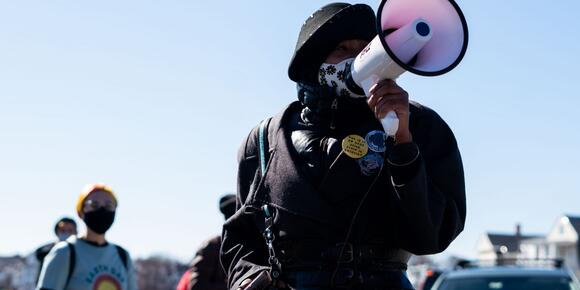 Given the COVID-19 pandemic, local elections, crime and sports, there was no shortage of news on the North Shore this year. Here’s my take on the year’s top stories.

— Vaccines finally start to be distributed, prompting hope among much of the population that things would finally return to some sense of normalcy. But, unlike the plot of any Hollywood movie based on the apocalypse, many people decide to take their chances and decline the life-saving drug.

— Students return to in-person learning after schools were remote for the majority of last year. Students praise the decision, as it will allow for the return of snow days, instead of remote-learning days during inclement weather.

— Mayor Thomas M. McGee announces he is not seeking reelection, which opens the door for a new mayor in Lynn. Former college wrestler Jared Nicholson ultimately pins Darren Cyr in a contentious match. At the polls, Nicholson won by a landslide, leading to a shakeup on the School Committee and a new face on the City Council.

— Swampscott protests everything. The town became a tourist destination for protesters of all kinds, with many deciding they could get their point across while also catching a pleasant breeze off the ocean where Humphrey Street meets Monument Avenue.

— When Northeastern University asked Nahant if it wanted more education, the town replied: No thanks, we’ll continue to go to Swampscott for that. Nahant drove home its point when it voted to take East Point by eminent domain, effectively preventing Northeastern’s proposed expansion.

— Swampscott saw an education fight of its own this year, but voters ultimately approved a new district-wide elementary school after a failed vote the last time it was proposed. Elsewhere, a new elementary school opened in Marblehead, and Lynn was accepted into the MSBA (Massachusetts School Building Authority) process to try again for a new Pickering Middle School.

— Interest is not peaking among residents for a new power plant in Peabody. The plant would operate during peak demand for electricity, but some locals saw it as a pretty dim idea.

— Hollywood heartthrob George Clooney causes a stir when he comes to Lynn to film a movie.

— Salem is one of three communities selected to bring offshore wind to Massachusetts. The Baker administration and Salem officials insist this is a big deal.

— Battle lines are drawn over proposed 40B projects on Elm Street in Swampscott and on Endicott Street in Peabody. In Lynn, a fight over affordable housing was played out with the development of the city’s housing-production plan. The plan passed in September, with opposition from two city councilors, one of whom was running for mayor. Residents and public officials in all three communities agree: They want more affordable housing, just not anywhere near where they live.

— Lynn and Swampscott get $5 million from the legislature to clean up King’s Beach in hopes of preventing further deformities among the residents of both communities.

— Nahant begins to clean up a mess of its own, when work starts on a sewer-system replacement in town.

— Men have been behaving badly in Lynnfield. The first parent to be convicted in the “Varsity Blues” college-admissions scandal, John Wilson, lives in town. John Connolly, Whitey Bulger’s FBI protector who was released from federal prison due to health reasons in February, also calls Lynnfield home. And the infamous bank-heist mastermind, Ted Conrad, a 20-year teller at a Cleveland bank who disappeared after leaving work on July 11, 1969 with $215,000, was revealed to have been living in plain sight in Lynnfield until his death earlier this year.

— The Peabody City Council seeks to stop entertainment from happening at certain hours at Olio, a Main Street business that specializes in, you guessed it: entertainment.

— Development continues in downtown Lynn. The Procopio Companies start to build two new high-rise buildings, but decide to get rid of a third one. The Caldwell apartments on Munroe Street sell for $123 million.

— Lynn school food grosses out parents and students, prompting an investigation into the district’s food vendor.

— Saugus third-grader is called a hero when he saves a fellow student from choking. Despite the speculation, Saugus has a different food vendor than Lynn.

— An embattled Saugus School Committee member with a history of assaulting elderly people with fish is voted off the committee after another outburst.

— After a head-scratching fight against allowing a youth-led push for a Black Lives Matter street mural in Lynn, the mural is finally painted over the summer, and immediately begins to fade away due to weather and passing traffic.

— Marblehead native Shalane Flanagan runs six marathons in six weeks and spends the seventh week unable to get off the couch.

— Marblehead and Swampscott football teams won Super Bowls. For Marblehead, it was its first super win, and the team had some bragging rights too, as it beat the Big Blue in this year’s Thanksgiving rivalry game.

— The Peabody high school football team did not fare as well in 2021. An online video showing inappropriate behavior from its players was investigated and disciplinary action was taken by the school district.

— After months of speculation, Amazon Fresh announces its new location at the former Big Y building in Saugus. Unfortunately for Amazon Prime customers, two-day delivery is no longer guaranteed at the company’s grocery chain either.

— Coyotes have taken over Nahant and residents will have to learn how to coexist with the animals as there’s only one way off the island.

— Saugus saw an infestation of a coffin or corpse fly — or is it called a Phorid fly? Whatever the name, the fly known for feeding off of dead bodies got the town buzzing earlier this year.

— Stop the Bali Hai project was cooked in Lynnfield after a Land Court decision that overturned a ZBA ruling denying the apartment project, despite local opposition.

— Two Swampscott parents were charged for hundreds of teens drinking in their home. It must have come as a shock to the parents, who thought they were allowing the kids to drink responsibly.

— Ideas for a waterfront park were floated in Lynn, despite the reality that, like the long-awaited Blue Line extension into the city, it will probably never happen.