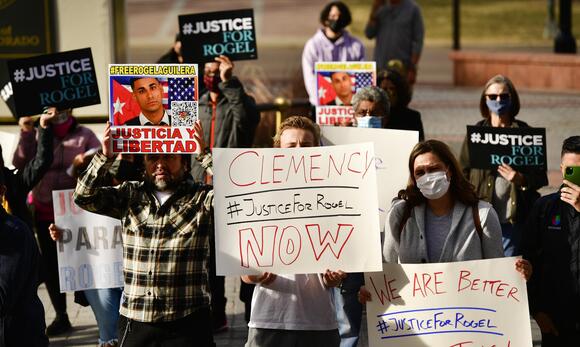 The Colorado governor has intervened to reduce the 110-year sentence handed down to a trucker for his role in a fatal 2019 collision after widespread outcry and calls for leniency.

Jared Polis announced Thursday he would commute the sentence for Rogel Aguilera-Mederos, reducing his sentence from 110 years to 10 years. Under the new sentence, the 26-year-old would be eligible for parole in five years.

Related: ‘Miscarriage of justice’: outcry after Colorado trucker given 110 years for fatal accident

“I am writing to inform you that I am granting your application for a commutation,” Polis wrote. “I believe you deserve clemency for several reasons. You were sentenced to 110 years in prison, effectively more than a life sentence, for a tragic but unintentional act.”

Polis said that the sentence was “simply not commensurate” with Aguilera-Mederos’ “actions, nor with penalties handed down to others for similar crimes”.

In October, a jury convicted Aguilera-Mederos of vehicular homicide and other charges related to a deadly collision that occurred while he was hauling lumber in the Rocky Mountain foothills. He has said that the brakes on his semi-trailer failed as he was descending a steep section of the highway, leading to four deaths and a multi-vehicle pileup.

The lengthy sentence, which the judge said he was obligated to give Aguilera-Mederos due to minimum sentencing laws in the state, was widely condemned and fueled criticism of the US justice system. More than 5 million people signed a petition calling for Polis to grant clemency to Aguilera-Mederos or commute his sentence, an effort truckers, civil rights groups and celebrities such as Kim Kardashian West voiced support for.

“It is a stark miscarriage of justice,” said Domingo Garcia, the president of the League of United Latin American Citizens (Lulac), of the sentence. Lulac sent a letter to Polis on behalf of Aguilera-Mederos, a Cuban immigrant, requesting a pardon or a reduction of his sentence, and Garcia traveled to Colorado to meet with the governor.

Kardashian West, a criminal justice reform advocate, was among those who praised the governor’s decision.

“This case was a clear example of why mandatory minimums don’t work and need to be abolished. I’m grateful to Governor Polis for his empathy and leadership on this case,” Kardashian West said on Twitter .

The decision was among several end-of-the-year commutations and pardons issued by Polis. The governor’s announcement comes after a judge scheduled a hearing next month to reconsider the sentence at the request of the district attorney, who had planned to ask that it be reduced to 20 to 30 years.

The ACLU of Colorado has expressed hope that the case might prompt reform of mandatory minimum sentencing laws in the state.

“The extraordinary nature of this particular case has prompted comments from some lawmakers that they may be interested in doing that,” said Mark Silverstein, the legal director of the ACLU of Colorado. “Sometimes unfortunately it takes an extraordinary case like this that put something that ought to be on the legislative agenda to the top of the legislative agenda.”

The Associated Press contributed to this report

Revealed: a private autopsy report shared with the Guardian concludes Desir’s death was a homicide. This article contains description of physical violence
1 DAY AGO
The Guardian

Actor’s family confirms she died shortly after being diagnosed with cancer, as her former co-stars including John Travolta pay tribute
9 HOURS AGO
The Guardian

DoJ says Axel Cox ‘admitted he burned cross because of the victims’ race and because they were occupying a home next to his’
1 DAY AGO
allthatsinteresting.com

The Chilling Story Of Mary Vincent, The Hitchhiking Teen Who Lost Both Her Arms In A Violent Attack

Residents in these states could get an additional holiday gift this month in the form of a state "stimulus" payment.
3 DAYS AGO
The Guardian

How the Kremlin tried to conscript me for its war, even though it murdered my father

A round mid-October, almost a month after Vladimir Putin called for the partial mobilisation of Russian citizens to fight the war in Ukraine, there was a knock at the door of the Moscow flat that is registered as my official residence in the country. The family friends who reside there...
2 DAYS AGO
The Guardian

Brazil’s Arsenal forward Gabriel Jesus and the defender Alex Telles have both been ruled out of the rest of the World Cup after picking up injuries in their final Group G game against Cameroon. Telles was substituted in the 54th minute of Brazil’s 1-0 defeat by the African side,...
2 DAYS AGO
The Guardian

Raheem Sterling is returning home from the World Cup in Qatar after armed intruders broke into his home on Saturday night. The England forward missed the 3-0 win against Senegal in the last‑16 tie on Sunday and Gareth Southgate said it was unclear whether Sterling would return. England play France in a quarter-final on Saturday.
1 DAY AGO
The Guardian

Eleanor Williams, 22, from Cumbria, denies a further seven counts relating to rape claims she made about a series of men
16 HOURS AGO
The Guardian

Exclusive: private autopsy says Kevin Desir’s death after struggle with six deputies was homicide, while official one said it was undetermined
1 DAY AGO
The Guardian

Details of the two Russian military airbases hit by explosions

It’s not clear what, exactly, Lorie Smith’s problem is. The Colorado woman aspires to be a web designer; apparently, she’s also upset that gay people can get married. Smith is an evangelical Christian who says that her faith makes her object to same-sex marriage. This wouldn’t be...
40 MINUTES AGO
The Guardian

Strikes help Putin? What a terrible excuse for refusing nurses the rise they deserve | Zoe Williams

The Tory chairman’s desperate remarks show the government has run out of arguments for pay restraint. No wonder its winter of discontent has turned into a winter of fury, writes Zoe Williams
19 HOURS AGO
The Guardian

‘People think I’m stupid’: the story of the man who shot himself 192 times

Wearing a green hat, spectacles and ear protectors, a man loads .44 Magnum bullets into the barrel of a gun. He hands his car keys to another man “just in case this doesn’t go right” and twirls the gun barrel while invoking Matt Dillon, the fictional marshal of Dodge City in Gunsmoke.
1 DAY AGO
The Guardian

No casualties reported as facility set on fire, one day after Russia blames Ukraine for two other drone strikes
2 HOURS AGO
The Guardian

TV tonight: a terrified Richard Branson made this film in case he died in space

The billionaire gets emotional as he records a farewell message to his family. Plus: SAS Rogue Heroes reaches its rollicking finale. Here’s everything to watch this evening
2 DAYS AGO