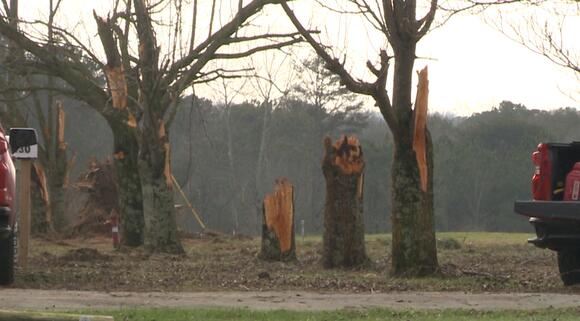 DEKALB COUNTY, Ala. — Local leaders say the Rainsville area got “lucky” Wednesday night, despite being struck by an EF-1 tornado just west of its downtown.

“We could see the track that the thing took, and what it could have done.” County Commissioner President Ricky Harcrow told News 19.

Deadly storms have hit the county before, but this time leaders say it was nowhere near as heartbreaking, despite many trees, roofs, and in some cases AC units sustaining heavy damage..

“Trees and houses can be replaced, but lives can’t,” Rainsville Police Chief Michael Edmondson said. “So we’re really blessed to not have any loss of life or injury.”

High school senior Aaliyah Freeman’s family was returning from out of town when the tornado damaged their home, but says friends and the community helped protect them and their neighbors.

“When we got home there was people in our driveway making sure that we had everything,” Freeman said. “And then this morning like right when I woke up at like 5:00 a.m., they were already out and starting to help everybody.”

Rainsville Police said the Rainsville Farmers Market will host donations to benefit those whose homes have been damaged.

Three people were arrested after a series of storage unit break-ins in the tri-state area, according to the Fort Payne Police Department.
RAINSVILLE, AL・20 HOURS AGO
WHNT News 19

Over 100 illegal gambling machines seized by deputies in Etowah County

The Huntsville Hospital System (HHS) has facilities across North Alabama and is frequently listed as a top employer in Madison County — however, they're now dealing with staffing shortages.
HUNTSVILLE, AL・17 HOURS AGO
WHNT News 19

Portions of Pratt Avenue to close for months during drainage installation

The City of Huntsville said the crews will be present starting at 9 a.m. on Wednesday, November 30.
HUNTSVILLE, AL・2 DAYS AGO
WHNT News 19

Residents of a Madison home will be displaced after a lightning strike started a fire during the overnight storms, according to fire officials.
MADISON, AL・2 DAYS AGO
WHNT News 19

The names of two people killed in a crash in Boaz on Tuesday night have been released.
BOAZ, AL・2 DAYS AGO
WHNT News 19

Police: 1 person detained after van stolen from business in Huntsville

A person was taken into custody on University Drive in connection with a stolen vehicle investigation.
HUNTSVILLE, AL・1 DAY AGO
WHNT News 19

Police say a man led them on a chase for nearly 24 hours over multiple counties on Sunday.
MADISON COUNTY, AL・2 DAYS AGO
WHNT News 19

The ice cream machine at McDonald's is keeping true to its reputation as things got heated at the location in Meridianville, according to local fire officials.
MERIDIANVILLE, AL・22 HOURS AGO
WHNT News 19

A second man has been arrested and charged with attempted murder in connection to a shooting that happened in Huntsville two months ago, according to police.
HUNTSVILLE, AL・1 DAY AGO
WHNT News 19

Christmas is coming to Ditto Landing

A new holiday tradition is getting started in South Huntsville! Christmas is coming to the river at Ditto Landing with three weeks of holiday celebrations.
HUNTSVILLE, AL・1 DAY AGO
WHNT News 19

An arrest was made in connection to a robbery in the Holly Pond area in Cullman.
CULLMAN, AL・2 DAYS AGO
WHNT News 19

The positions range from delivery and retail positions located in Huntsville, the Shoals and more.
ATHENS, AL・1 DAY AGO
WHNT News 19

The Alabama Farmers Cooperative staff is planting seeds this season, with the hopes of harvesting some big smiles on Christmas morning.
DECATUR, AL・17 HOURS AGO