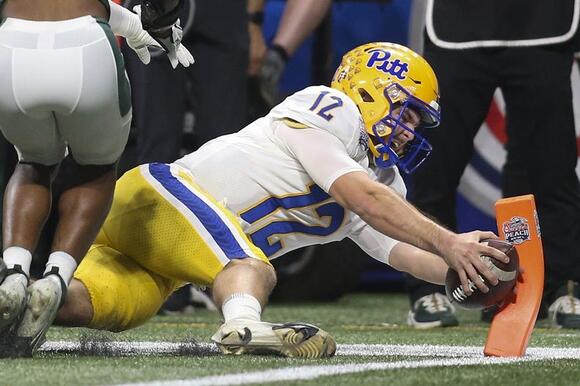 PITTSBURGH (93.7 The Fan) – It was going to be Nick Patti’s big opportunity to grab the early spot as the Panthers starting quarterback for 2022. Until he left with an injury in the first quarter.

The junior with a couple of years of eligibility made his second career start against Michigan State.  Backed up to their own two-yard line after a mistake on the opening kickoff, Patti threw a couple of incompletions on his opening drive.

Patti would complete his first pass on the second play of the following drive, hitting Jordan Addison for 13 yards.  He would rush for a combined 11 yards before another completion to Addison for eight yards.  On a third and four from the Michigan State 16-yard line, Patti would roll out to his left and decide to go for the end zone.

He looked like the Kenny Pickett highlight from his first start against second-ranked Miami diving for the pylon.  Like Pickett, Patti would score.  However, as players came over to celebrate, you could tell something was wrong as tight ends Lucas Krull and Gavin Bartholomew were being suddenly careful.

The New Jersey native would head to the locker room and come back out with his left arm in a sling.  Patti would finish 2 of 5 for 21 yards, plus 27 yards rushing.

Patti replaced by redshirt sophomore Davis Beville and will compete with USC transfer Kedon Slovis next season to replace Pickett.

Steelers believe as George Pickens grows, so will the offense

The rookie receiver has made some amazing catches at practice and in training camp, what the 2nd round pick said of starting to click & his importance to the O
PITTSBURGH, PA・1 DAY AGO
93.7 The Fan

It’s almost getting to be a bit too common. George Pickens, master of doing things with his human body that makes you wonder about that ‘human’ part, did it again. That and more in our postgame notes from the Steelers’ win over the Colts.
PITTSBURGH, PA・1 HOUR AGO
93.7 The Fan

Biggest challenge Monday night will be limiting what Jonathan Taylor does-how the Steelers do that and what they say about their defensive issues
PITTSBURGH, PA・14 HOURS AGO
93.7 The Fan

The Steelers take down the Colts on MNF

The Pittsburgh Steelers took on the Indianapolis Colts on Monday Night Football, beating them 24-17. The Steelers got the game underway on a promising drive that resulted in a completed 45-yard field goal attempt by Matt Wright for a 3-0 lead.
PITTSBURGH, PA・4 HOURS AGO
93.7 The Fan

The Pitt men’s soccer team reaches the Elite 8 upsetting number 1 as the 2-seed Pitt volleyball team hosts the 1st 2 rounds of the NCAA Tournament
PITTSBURGH, PA・1 DAY AGO
93.7 The Fan

Pittsburgh Pirates’ short stop Oneil Cruz continue to impress, this time in winter ball. Playing for the Tigres Del Licey in the Dominican Republic, Cruz went 3-for-3 in only his second game with the team with an impressive home run thrown in.
PITTSBURGH, PA・17 HOURS AGO