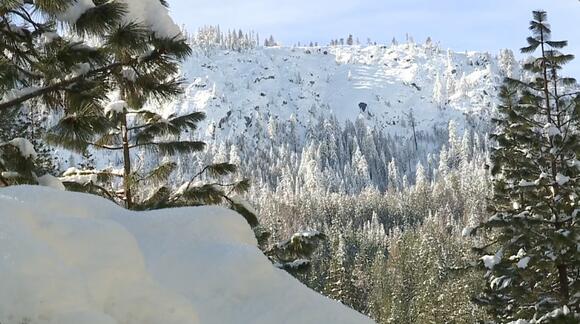 The Department of Water Resources says the state’s snowpack is way above average for this time of year.

“We are off to a great start,” said Sean De Guzman, with DWR.

The Department of Water Resources measures snowpack water content at more than 260 stations across the Sierra multiple times every year. The data helps officials forecast the amount of water that will melt and run off to state reservoirs to help the state’s water needs, information that is critical for the coming dry months.

The recent winter snowstorms have been shattering records, with the University of California, Berkeley’s Central Sierra Snow Lab reporting 122 inches of snow in the last seven days and 210 inches since the start of December from their Donner Pass location.

De Guzman and his team measured the snowpack Thursday afternoon in Phillips, a small community nestled off Highway 50 that sits at 6,800 feet.

The measurements found the snowpack in that area of the Sierra stand at 202% of average for this time of year.

California’s average is lower than that but still high at 160% of average for this part of the year.

There was so much snow at Phillips Station that the state officials in charge of the snow survey had to walk in with snowshoes on. While that’s not necessarily unusual, they said all of the snow brings hope for the state’s drought.

“Our precipitation statewide is looking well above average,” De Guzman explained. “We’ve had one of the best, one of the snowiest Decembers on record.”

Even with that good news, the state is still below where it needs to be by April 1, at 81% of that date’s average.

Survey leaders said it’s a reminder that California is still in a drought.

“Definitely not out of the woods quite yet,” De Guzman said. “Most of our reservoirs are still below average. I want to say there are just a couple of reservoirs that are above average at this point.”

De Guzman and his team will closely watch and hope for more snow in the months ahead.

Incoming dry weather this weekend means snowmelt in the foothills will add water to rivers on top of the recent rain, which could result in flooding on roads with poor drainage.

MADERA COUNTY, Calif. (KSEE/KGPE) – A new kind of alert, called the Feather Alert is centered around informing the public when an indigenous person goes missing, specifically women and children. At Chukchansi Casino, on tribal land, several different tribes and state assembly members gathered to celebrate a new preventative measure to try and reduce the number of […]
CALIFORNIA STATE・1 DAY AGO
YourCentralValley.com

California cities ranked among the ‘most fun’ in the nation

Several California cities were ranked among the most fun places in the nation, according to a new study from WalletHub. The personal finance website compared 182 cities, including 150 of the most populated and at least two from each state, to determine which cities were the “most fun.” Researchers evaluated 65 key metrics, which included […]
CALIFORNIA STATE・2 DAYS AGO
YourCentralValley.com

West Goshen’s water to be more reliable after $3.4M grant

What Christmas movie are Californians searching for?

FRESNO, Calif. (KSEE/KGPE) – December ’tis the season to enjoy Christmas classic films with the family. The 90s arguably offered a huge variety of movies that can fill your home with holiday cheer. With so many, we wondered what Christmas films people were looking for, especially here in California. Thanks to a study done by […]
CALIFORNIA STATE・3 DAYS AGO
YourCentralValley.com

Dog found in Clovis reunited with owner in Florida

CLOVIS, Calif. (KSEE/KGPE) – A former Clovis family now living in Florida has been reunited with their missing dog, officials with the Clovis Animal Services (CAS) announced on Tuesday. According to CAS, Angus, also known as Goosie, went missing a while ago in Tulare County when his owner’s vehicle broke down along Highway 99. The […]
CLOVIS, CA・2 DAYS AGO
YourCentralValley.com

It was one of two separate incidents at the school Tuesday that the school district called "disturbing."
ALAMEDA, CA・2 DAYS AGO
YourCentralValley.com

SAN FRANCISCO (KRON) — The chief of the San Francisco Police Department said the story has become “distorted” following a vote Tuesday not to authorize the department to use lethal force robots. In a statement sent to KRON4, SFPD Chief William Scott said the department wants “to use robots to save lives – not take […]
SAN FRANCISCO, CA・1 DAY AGO
YourCentralValley.com

HUGHSON, Calif. (KSEE/KGPE) – California’s district 13 finally has a congressman-elect nearly a month after election day. Republican John Duarte will soon head to Washington after Democrat Adam Gray conceded Friday. We talked with Duarte on Monday, and he told us he is very excited to get to work in Washington. He said he thanks the […]
WASHINGTON, DC・3 DAYS AGO
YourCentralValley.com

SAN FRANCISCO (KRON) – The San Francisco Board of Supervisors voted not to allow police to deploy robots authorized to use lethal force on Tuesday. The proposal to use lethal force robots is part of a broader piece of legislation authorizing San Francisco PD to obtain and use military gear. Tuesday’s vote will send the […]
SAN FRANCISCO, CA・2 DAYS AGO
YourCentralValley.com

INGLEWOOD, Calif. (KSEE/KGPE) – It appeared the Las Vegas Raiders had turned a corner. Less than one month ago, they were 2-7. But then they won three straight games, two in overtime, and quarterback Derek Carr had thrown for at least 250 yards and two touchdowns in all three. On Thursday night, Carr threw for […]
LAS VEGAS, NV・14 HOURS AGO