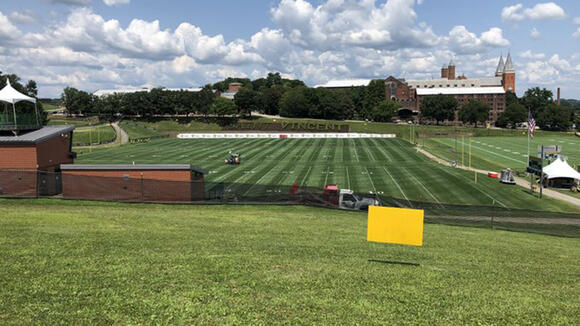 PITTSBURGH (KDKA) — Ben Roethlisberger has always been a big attraction at Steelers training camp in Latrobe.

It’s a summer tradition for many Steelers fans to drive to Saint Vincent College to catch a glimpse of their favorite players in action.

But will the quarterback’s career plans have an impact on the economic boost that training camp typically brings to the area?

Disappointment seems to be the most common emotion across the board from Steelers fans, especially in Latrobe. One popular restaurant is questioning how sales will play out during camp without Roethlisberger.

The weeks when the team visits Latrobe brings countless football fans to the area. Jonathan Heiple, the general manager of Sharkie’s Cafe, said those are the busiest weeks of the year. Heiple said it requires 30 to 40 percent more staffing to keep up with the orders.

He hopes whoever replaces Roethlisberger ends up with a massive following on their own.

But just like any separation, people are not quite ready to fully let go yet. Some fans hope Roethlisberger comes back to visit the area.

The free agent is one step closer to picking a new team and returning to the field.
DALLAS, TX・21 MINUTES AGO
USA TODAY Sports Media Group

Lions vs. Bills was the most-watched early-afternoon Thanksgiving game ever

If you’re a Lions fan, chances are you watched the team’s Thanksgiving game. It seems millions of folks who aren’t Lions fans also tuned into the early game on Thursday afternoon. The matchup from Ford Field between the Lions and the Buffalo Bills was the most-watched football...
DETROIT, MI・27 MINUTES AGO