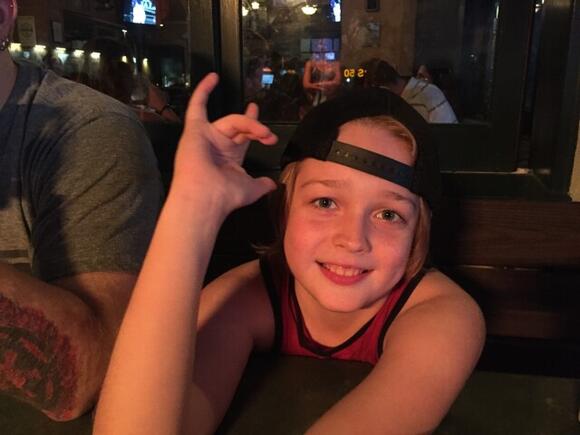 A Rose Parade float will honor a 12-year-old Las Vegas boy this weekend after he helped more than 300 people across the world by donating his organs after he passed away.

On Feb. 14, 2020, Alexander Bush was walking home from school with his then-nine-year-old sister when they were both hit by a distracted driver. Alexander did not survive his injuries, and his sister now requires 24-hour medical attention.

But Alexander's parents are turning this tragedy into a triumph.

“His organs that they were able to donate stayed within the United States. His corneas have gone to Egypt and Beirut. With bone and tissue donations, they have gone all across the Americas, from Canada down to Chile," said Aaron Bush, Alexander's father.

Alexander's parents described him as a boy who loved to help other people. He was also helping to raise funds for his school's band.

“He had a sales pitch all made up in his head for everybody. Yeah, he did really well with that year," said Jennifer Bush, Alexander's mother.

“Yeah, he was the top earner in his class’s fundraiser, and that earned his class a pizza party after school one day,” his father added.

It was after that pizza party when Alexander and his sister were crossing Lone Mountain Road in a crosswalk, and they were hit by a distracted driver.

“I was like, 'hey, I’m on my way to work, buddy, what’s going on?' And it was a woman who was there picking up her child, and I pulled over to the side, and I was like, 'OK, well can you explain what’s going on? Where is his sister?'" Jennifer Bush recalled.

Alexander did not survive the accident, and his sister now requires 24-hour medical attention. But even through this tragedy, Alexander's parents decided to help other people.

“When it was apparent that he had not survived the injury, we were approached by the Donate Life people, and they took us aside and they had asked us what we thought about it. It really wasn’t a big question for us," Jennifer said.

They say donating his organs was a choice Alexander would have made as well.

“With his donations, 366 people have had their lives changed by his gifts," Aaron Bush said.

he was such a handsome kid. I live in the area. my God bless and heal his family. we continue to pray for his sister 🙏

For a sixth year, retired firefighter Michael Perry is continuing his favorite holiday tradition. On Wednesday, he’s hoping to ‘Stuff the Bus’ with thousands of toys for children in Las Vegas.
LAS VEGAS, NV・14 HOURS AGO
KTNV 13 Action News

A Las Vegas local and a visitor from Oregon won thousands in jackpots at The Cromwell and Gold Coast.
LAS VEGAS, NV・2 DAYS AGO
KTNV 13 Action News

The Nevada Department of Wilderness has confirmed that the mountain lion spotted in a northwest Las Vegas neighborhood has been euthanized after being captured on Wednesday morning.
LAS VEGAS, NV・10 HOURS AGO
KTNV 13 Action News

A mountain lion was spotted by a Las Vegas couple roaming through a neighborhood near Grand Canyon and Grand Teton.
LAS VEGAS, NV・1 DAY AGO
KTNV 13 Action News

On Wednesday, Lee Canyon celebrated the start of the winter season. However, the resort anticipates a large storm this weekend that will bring them a lot of the real stuff.
LAS VEGAS, NV・6 HOURS AGO
KTNV 13 Action News

Thousands of Southern Californians are flocking to Las Vegas

Plans for giant, guitar-shaped hotel at site of Mirage revealed

Portions of Karen Avenue to be re-named 'Liberace Way'

From Summerlin to Henderson, businesses are taking water conserving action

Water conservation efforts continue in the valley, and many businesses have already removed thousands of square feet of grass from Summerlin to Henderson.
HENDERSON, NV・6 HOURS AGO
KTNV 13 Action News

The report shows that the median price of previously-owner single-family homes sold in Southern Nevada during November was $430,990.
LAS VEGAS, NV・1 DAY AGO
KTNV 13 Action News

Every dollar spent at the Magical Forest goes towards programs and services for over 3,000 people with disabilities at Opportunity Village
LAS VEGAS, NV・5 DAYS AGO
KTNV 13 Action News

Cowboy Christmas rides into town while the National Finals Rodeo. The holiday market features more than 350 exhibitors from across the country and it offers interactive experiences for families.
LAS VEGAS, NV・6 DAYS AGO
KTNV 13 Action News

For families going through tough times, the holidays can be difficult to pull together. HopeLink of Southern Nevada is running a free holiday toy store to help them out.
LAS VEGAS, NV・6 DAYS AGO
KTNV 13 Action News

Garth Brooks' upcoming residency at the Colosseum at Caesars Palace has been extended through 2024 after organizers saw "extraordinary demand" for tickets to "Garth Brooks/Plus ONE."
LAS VEGAS, NV・6 DAYS AGO
KTNV 13 Action News