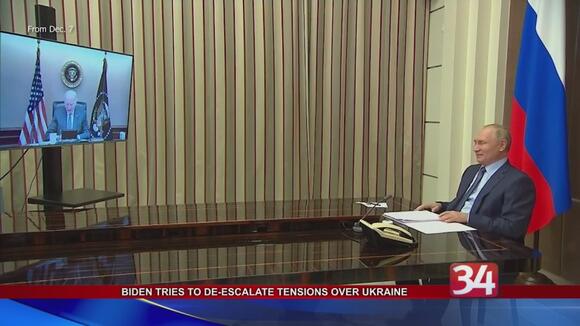 WASHINGTON, D.C. – President Joe Biden will hold a call with his Russian counterpart Vladimir Putin this afternoon in a bid to de-escalate tensions over Ukraine.

More than 100,000 Russian troops are stationed along the border and U.S. intelligence officials have warned that Russia could be planning to launch an attack as soon as next month.

But Putin denies this.

NewsChannel 34’s Jessi Turnure joins us with a preview of the leaders’ call.

“Good to see you again.”

President Joe Biden and his Russian counterpart Vladimir Putin will speak for the second time this month today as the U.S. continues to pressure Russia to draw down its military presence near Ukraine’s borders.

“I am absolutely confident he got the message.”

Following their call at the beginning of December, the president stressed he was clear what would happen if Putin invaded Ukraine.

Putin has warned Russia would be forced to act if NATO expands its military capabilities into Ukraine.

U.S. and Russian officials plan to sit down for security talks in Geneva January 10th.

But the two leaders are not expected to participate in the talks.

Meetings will continue that week of January between Russia and NATO officials over security issues.

Trooper suspended after DUI on the job arrest

A state trooper working out of western Pennsylvania has been suspended without pay after being arrested for DUI on the job.
HARRISBURG, PA・1 DAY AGO
News Channel 34

18-year-old Kadin Abdullah's death is being marked by those outside of Vestal.
VESTAL, NY・2 DAYS AGO
TheDailyBeast

For the second day in a row, an unmanned drone thought to be dispatched by Ukraine struck deep within Russian territory as the invasion Vladimir Putin underestimated turned sharply towards a war fought in both nations.On Monday, deadly twin strikes hit the Engels-2 airfield and the Dyagilevo military base less than 150 miles from Moscow. The strike Tuesday hit an oil storage tank in Kursk, not far from the Ukraine border, setting off a spectacular explosion sure to rattle Russians who have been brainwashed to believe the war would never hit home.The change in tack from Ukraine—which has not formally...
1 DAY AGO
The Guardian

Jill Biden privately told the French president that she and Joe Biden were ready for his re-election campaign: NYT

Joe Biden, who at 80 is the oldest US president in history, has not publicly announced whether he will seek reelection in 2024.
GEORGIA STATE・22 HOURS AGO
Salon

“I never said what I said”: Trump ripped for trying to deny his own call to “terminate” Constitution

Former President Donald Trump gets ready to speak during a Save America rally on October 1, 2022 in Warren, Michigan. (Emily Elconin/Getty Images) After former President Donald Trump took to his Truth Social platform to proclaim that the U.S. should "terminate" the Constitution, he followed up on Monday with a new rant denying that he had ever said any such thing — even though he did, publicly, for all to see.
MARYLAND STATE・1 DAY AGO
HuffPost

Trump failed to disclose the loan, which was paid off months after he took office, Forbes reported.
2 DAYS AGO
grid.news

Putin’s propagandists have a new message about Ukraine: If we don’t win, we’ll all be tried for war crimes

Over the last two months, support for the Kremlin’s war on Ukraine has dropped dramatically among the Russian population — a roughly 20 percent drop, according to several polls, including one conducted for the Kremlin. And as that support drops, Russia’s leading propagandists are making a new case for continuing the war.
1 DAY AGO
Salon

Fox host won’t let Trump walk back his call to terminate Constitution: “The damage has been done”

Donald Trump arrives at a rally on April 2 near Washington, Michigan. ( Scott Olson/Getty Images) Fox Business host Stuart Varney used his monologue on Tuesday to lash out at former President Donald Trump's desire to terminate parts of the U.S. Constitution over his 2020 presidential election loss. Over the...
GEORGIA STATE・1 DAY AGO
Newsweek

The Ruse That Could Dupe Putin Into Another Crushing Ambush

Just weeks after Ukrainian forces liberated the city of Kherson in Ukraine and kicked Russian forces out, major questions remain over which counteroffensive campaign Kyiv will launch next—and where Russia’s next defeat will be as the cold winter weather begins to settle in.Tackling Russian forces in the Zaporizhzhia region could be a logical next step for Ukrainian forces. A win in Zaporizhzhia would help Ukraine cut off Russia’s land bridge to Crimea, the peninsula Vladimir Putin illegally annexed from Ukraine in 2014 and has been occupying ever since. Russia’s hold on Crimea is even more vulnerable now that Kherson—a key...
14 MINUTES AGO
News Channel 34

In the early morning hours of November 24th, 18-year-old Kadin Abdullah, a Vestal High School student, was killed in a motor vehicle accident in the area of Clayton Ave. and Lagrange St.
VESTAL, NY・5 DAYS AGO
DOPE Quick Reads

Footage of what Ukrainian forces allege to be a K-51 grenade was recently shared via Telegram by the Naval Forces of the Armed Forces of Ukraine. The translated caption to their video revealed that,
2 DAYS AGO
News Channel 34

ELMIRA, N.Y. (WETM) — Elmira Icon and business owner Charles E. “Pudgie” Cleary, founder of Pudgie’s Pizza and Subs, died early Sunday after injuries sustained from a stroke just days prior, he was 82. The news was confirmed by a member of the Cleary family, as well as, an obituary posted online. Born January 9, […]
ELMIRA, NY・1 DAY AGO
The Associated Press

DUBAI, United Arab Emirates (AP) — Iran said Thursday it executed a prisoner convicted for a crime allegedly committed during the country’s ongoing nationwide protests, the first such death penalty carried out by Tehran. The execution comes as other detainees also face the possibility of the death penalty for their involvement in the protests, which began in mid-September, first as an outcry against Iran’s morality police. The protests have since expanded into one of the most serious challenges to Iran’s theocracy since the 1979 Islamic Revolution. Activists warn that others could also be put to death in the near future, saying that at least a dozen people so far have received death sentences over their involvement in the demonstrations. The “execution of #MohsenShekari must be me(t) with STRONG reactions otherwise we will be facing daily executions of protesters,” wrote Mahmood Amiry-Moghaddam, the director of the Oslo-based activist group Iran Human Rights. “This execution must have rapid practical consequences internationally.”
36 MINUTES AGO
News Channel 34

According to the Delaware County Sheriff's Office, a 70-year-old Delhi man has been charged with two counts of Forcible Touching.
DELHI, NY・1 DAY AGO
The Associated Press

BRUSSELS (AP) — European Union countries are weighing on Thursday whether the bloc’s three newest members — Bulgaria, Romania, and Croatia — can fully open their borders and participate in Europe’s ID-check-free travel zone, but more delays to their entry appear likely. A green light would be a boon for their economies. The so-called Schengen area is the world’s largest free travel zone. It comprises 26 countries — 22 EU states plus Iceland, Liechtenstein, Norway and Switzerland. Almost 1.7 million people live in one Schengen country and work in another. Around 3.5 million people cross an internal border each day. But full accession for the EU’s newest members — Bulgaria and Romania joined the bloc in 2007, Croatia in 2013 — requires unanimous support from their partners, and objections were still being raised on the eve of a meeting of interior ministers in Brussels meant to examine their cases. The three countries already partly adhere to the Schengen rulebook, but internal border controls have yet to be lifted. The hold-up has long been over concerns among the trio’s partners about the reach of organized crime, unauthorized migration, and other security concerns.
23 MINUTES AGO