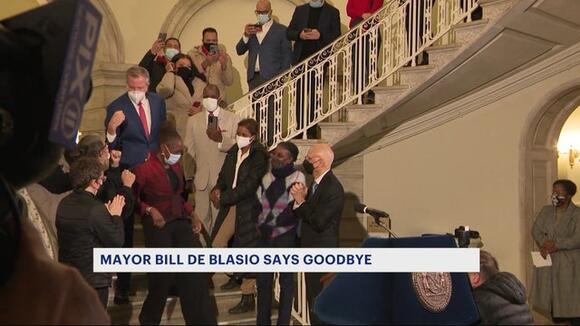 The mayor was joined by the city's first lady, Chirlane McCray, as he addressed his staff about the eight years he spent leading New York City.

De Blasio served as the city's 109th mayor after being elected into office in 2014. He sought to tackle some of the toughest issues including the homeless crisis, education and crime.

The mayor also sought to eliminate traffic fatalities with Vision Zero. Most recently, the public servant has led the city throughout the highs and lows of the coronavirus pandemic.

While many cheered on the mayor, protestors lined the gates to dispute mask and vaccine mandates put into place citywide. Amid the opposing voices, the former presidential candidate says he fought for his city.

Mayor-elect Eric Adams is expected to be sworn-in as the city's next mayor during the New Year's Eve celebration in Times Square.

The clinic took place at the St. Jerome H.A.N.D.S. Community Center in the Bronx, and organizers say the goal of the clinic is to create a safe space for people seeking asylum who need resources.
NEW YORK CITY, NY・6 HOURS AGO
News 12

Have a wish? Times Square's Wishing Wall returns ahead of New Year's celebration

The office is set to include over 100 lawyers and at least 30 social workers. It will use the u-Visa practice, allowing protection to immigrants who are victims to certain crimes.
BROOKLYN, NY・3 HOURS AGO
News 12

The city of Peekskill came out Thursday afternoon to pay a final farewell to Police Officer Gregory Jones. Jones died unexpectedly on Thanksgiving night. He volunteered in a community Thanksgiving dinner the day before. The 48-year-old made a lasting impression on the community he served. "They truly loved him. He...
PEEKSKILL, NY・1 DAY AGO
News 12

A newly unveiled housing complex in Brownsville is touting itself as a direct response to the affordable housing crisis while focusing on energy efficiency.
BROOKLYN, NY・2 DAYS AGO
News 12

Thousands of high school seniors across the country are celebrating the steps they took to apply to college, and Bronx students joined in on the annual tradition’s 12th year.
BRONX, NY・6 HOURS AGO
News 12

Police responded to a call at 2249 Morris Ave. and found Shabazz with a gunshot wound to the torso. He was transported to St. Barnabas Hospital, where he was pronounced dead.
BRONX, NY・6 HOURS AGO
News 12

Police need the public's help in finding a man who is connected to a hate crime in the Bronx earlier in November.
BRONX, NY・2 DAYS AGO
News 12

Police officers have to work at empty intersections where there are not enough crossing guards.
NASSAU COUNTY, NY・1 HOUR AGO
News 12

Two people are facing charges after they were accused in a so-called “grandparent scam” in Cranford.
CRANFORD, NJ・1 HOUR AGO
News 12

A mosque in Middlesex County is calling for an investigation after a truck with anti-Muslim imagery was seen circling several Islamic centers in the state.
PISCATAWAY TOWNSHIP, NJ・2 DAYS AGO
News 12

Larchmont moves Sleighbells on the Avenues to Sunday

This is taking place on Larchmont Avenue and Addison Street or Chatsworth and Vanderburgh avenues from noon until 3 p.m.
LARCHMONT, NY・11 HOURS AGO
News 12

Firefighters were on the scene of two major fires in Hudson County that were less than 3 miles apart from one another. The first fire started just before 5 p.m. Thursday in an apartment building near 54th and Madison streets in West New York. The second fire started about two hours later on the 900 block of John F. Kennedy Boulevard in Union City at the Salvation Army thrift store.
HUDSON COUNTY, NJ・1 DAY AGO
News 12

The victim was treated at NYC Health & Hospitals/Jacobi in critical but stable condition with burns to the left side of the face.
BROOKLYN, NY・11 HOURS AGO
News 12

Santa Claus visited the revelers and sang some Christmas carols together to welcome the holiday season.
YONKERS, NY・3 HOURS AGO
News 12

Las Vegas Sands, one of the largest gambling companies in the world, is looking to apply for the right to build a casino on Long Island.
NASSAU COUNTY, NY・11 HOURS AGO