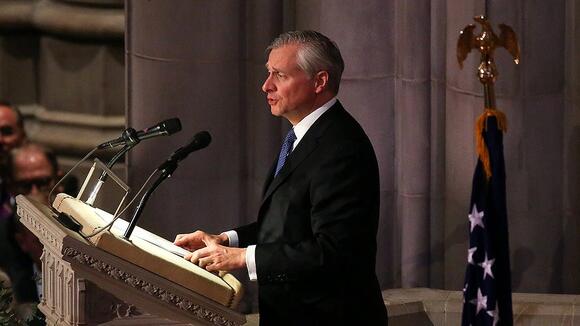 Historians Jon Meacham and Doris Kearns Goodwin are slated to participate in one of the events organized at the U.S. Capitol on Jan. 6 to mark the one-year anniversary of the deadly riot.

House Speaker Nancy Pelosi (D-Calif.) announced in a letter to colleagues on Thursday that Meacham and Goodwin will participate in a conversation moderated by Librarian of Congress Carla Hayden “to establish and preserve the narrative of January 6th.”

Other events scheduled for next Thursday include a moment of silence, time for lawmakers to share their testimonials regarding the Jan. 6 riot and a prayer vigil. The House will be holding a pro forma session that day.

“These events are intended as an observance of reflection, remembrance and recommitment, in a spirit of unity, patriotism and prayerfulness,” Pelosi wrote. “All events will be live-streamed, so that Members can watch and participate from their districts.”

Democrats have sought to keep attention on the events of Jan. 6, with a special committee set up to probe the riot issuing a series of subpoenas and document requests in recent months to former Trump administration officials.

Pelosi announced earlier this month that her office was planning a series of events for the first week of January as part of a "solemn observance" of the riot.

Next Thursday will mark the one-year anniversary since supporters of former President Trump stormed the Capitol in an effort to disrupt Congress as it moved to certify the 2020 presidential election results.

Lawmakers, aides and reporters ducked for cover or hid inside offices as the mob breached the Capitol. The insurrection has only deepened political divisions among Democrats and Republicans, but it also wedged a divide among Republicans.

Two Republicans, Reps. Liz Cheney (Wyo.) and Adam Kinzinger (Ill.), were tapped to sit on the House panel investigating the riot, receiving criticism from some of their GOP colleagues. Trump has also blasted the committee as politically motivated.

🐂💩Pelosi and the Democrats were behind the events of January 6th in my opinion! Try addressing the current issues our nation face now at the hands of dementia Joe!

if it were the insurrection that y'all call it, why would you wanna give the perpetrators the satisfaction of keeping it in the news? dumbass Dems

House Republicans will take the reins of the lower chamber in fewer than six weeks, returning to power after four years in the minority wilderness to usher in a new era of divided government heading into the 2024 presidential election. The shift comes after two years when President Biden enjoyed...
WASHINGTON STATE・23 HOURS AGO
The Hill

More than 70 incoming lawmakers will be sworn into the House this January after winning their races earlier this month. Republicans are poised to control the House next year, with 220 seats having been called in their favor compared to Democrats’ 213. Two races remain uncalled. Next year’s crop...
PENNSYLVANIA STATE・10 HOURS AGO
The Hill

Editor’s note: The Hill’s Morning Report is our daily newsletter that dives deep into Washington’s agenda. To subscribe, click here or fill out the box below. Democrats who control both the House and Senate have ambitious to-do lists before Congress adjourns this year. What they lack are bipartisan agreements and commitments inside their party about what can or should get to President Biden’s desk in December.
10 HOURS AGO
The Hill

This year’s White House holiday decor is taking a cue from the Constitution, decking the halls with the theme, “We the People.”. Jill Biden unveiled the theme for the annual decorating tradition on Monday, saying in a statement that her hope for the White House’s seasonal makeover was to “capture the spirit embodied in the very idea of America.”
PENNSYLVANIA STATE・11 HOURS AGO
The Hill

Rep. Kevin McCarthy (R-Calif.) fancies himself playing “The Apprentice Speaker,” barking, “You’re fired,” at Democrats he wants to remove from their committees. Unfortunately, for him, a handful of his own party members want to fire him by defeating him for Speaker. Undaunted, he’s making a...
CALIFORNIA STATE・1 HOUR AGO
The Hill

Rep. Adam Schiff (D-Calif.), a member of the House Jan. 6 panel investigating the Capitol riot on Sunday pushed back on a Washington Post report suggesting tensions between committee staffers and Rep. Liz Cheney (R-Wyo.), the panel’s vice chair. The Post, citing interviews with 15 anonymous former and current committee staffers, reported on Wednesday that…
CALIFORNIA STATE・1 DAY AGO
The Hill

Fauci pushes back on Pence remarks: ‘I don’t align myself with anybody’

Anthony Fauci on Sunday pushed back against former Vice President Mike Pence’s claims that the White House adviser aligned himself with Democratic governors during the peak of the COVID-19 pandemic, saying he is a “public health person” who made decisions based on science. Fauci, who is stepping down as the COVID-19 chief medical adviser to…
1 DAY AGO
The Hill

Kari Lake and the last stand of the election deniers

According to the political website FiveThirtyEight, “the vast majority of election-denying candidates who lost their races have conceded.” They no more deserve applause than would arsonists who, at the last minute, decide to fight the fire that they had set. But unlike these candidates, Kari Lake, the two-fisted,...
ARIZONA STATE・3 HOURS AGO
The Hill

Ivanka Trump tweeted a photo of her family at the United States’ World Cup match in Qatar on Friday.  “Go Team USA!” the former White House adviser tweeted, followed by an emoji of an American flag.  One photo Trump posted shows Trump, her husband, Jared Kushner, and their three children, and another shows her son…
2 DAYS AGO
The Hill

Former Rep. Denver Riggleman (R-Va.), who previously worked as an adviser to the House select committee investigating Jan. 6, said Sunday that committee vice chair Rep. Liz Cheney (R-Wyo.) had “outsized” influence over its work. Riggleman was speaking to CNN’s Jim Acosta ahead of the release of the...
WASHINGTON STATE・20 HOURS AGO
The Hill

Congress should nip the independent state legislature theory in the bud

The U.S. Supreme Court will hear a case with dangerous implications for American democracy on Dec. 7, the anniversary of a previous day of infamy. The case, Moore v. Harper, will give the GOP-appointed majority the opportunity to grant state legislatures the sole state authority to set rules for federal elections. In states where legislatures are controlled by one party, that party could gerrymander to its heart’s content without approval by the governor or oversight by the courts. The decision could also set the stage for a repeat of the scheme pursued by election deniers to snatch the presidency in 2020 with alternate or “fake” elector slates.
6 HOURS AGO
WFPL

Democratic Rep. Pamela Stevenson filed to run for attorney general last week, making her the first Black woman to run for the office.
KENTUCKY STATE・25 MINUTES AGO
The Hill

Schiff on complying with GOP subpoenas: ‘We will have to consider the validity’

Rep. Adam Schiff (D-Calif.) on Sunday said he’d have to “consider the validity” of any subpoena from Republicans when they take control of the House of Representatives in the next Congress. “We will have to consider the validity of the subpoena. But I would certainly view my...
1 DAY AGO
The Hill

Rep. Michael McCaul (R-Texas) on Sunday said Republicans should “build a case” when asked if he supported potential efforts by House Republicans to impeach Department of Homeland Security (DHS) Secretary Alejandro Mayorkas over his handling of the U.S.-Mexico border. McCaul told ABC’s “This Week” co-anchor Martha Raddatz that Mayorkas has been “derelict in his responsibilities”…
1 DAY AGO
The Hill

Clyburn says he stayed in House leadership to rep the south

Rep. James Clyburn (D-S.C.), the No. 3 House Democrat, on Sunday cited a need for southern representation as a reason he chose to remain in the top tiers of Democratic leadership. Clyburn earlier this month announced he will step down from his current leadership post along with House Speaker Nancy Pelosi (D-Calif.) and House Majority…
1 DAY AGO
The Hill

Vice President Harris and French President Emmanuel Macron will visit NASA headquarters together on Wednesday, a White House official said Monday. Macron will be in Washington for an official visit with President Biden and Harris, and the trip to NASA is intended to showcase the United States and France’s “deepening collaboration on space in support of Earth, climate, and space science and space exploration,” according to the official.
WASHINGTON STATE・2 HOURS AGO
The Hill

More than 400 business groups are calling on Congress to take "immediate" steps to avoid a potential nationwide rail strike from damaging the economy.
PENNSYLVANIA STATE・24 MINUTES AGO
The Hill

Trump-era antisemitism envoy Elan Carr on Monday decried his former boss’s dinner with the rapper Ye and white supremacist Nick Fuentes. “No responsible American, and certainly no former President, should be cavorting with the likes of Nick Fuentes and Kanye West,” Carr tweeted. Carr, who served as the...
FLORIDA STATE・1 HOUR AGO