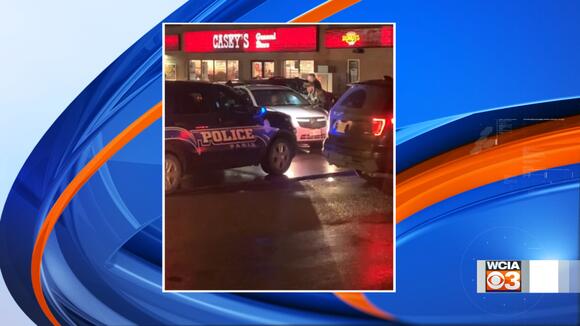 EDGAR COUNTY, Ill. (WCIA) — A Wisconsin woman is behind bars after what authorities said was a two-county vehicle chase on Wednesday night where multiple law enforcement vehicles were hit.

Thirty-year-old Alexandrea Maxwell of Hudson, Wisconsin, is in the Edgar County jail on preliminary charges of driving under the influence of drugs, aggravated fleeing and eluding, aggravated assault with a vehicle, and criminal damage to property. As of Thursday night, the woman did not have an entry in online court records indicating formal charges from prosecutors.

A statement from the Edgar County Sheriff’s Office said at around 8:32 p.m. Wednesday, state police and the Douglas County Sheriff’s Office alerted the Edgar County 911 dispatch center of a chase. Authorities reported the suspect vehicle, a white car, had hit a vehicle in Camargo, then fled, and in the process hit state police and Douglas County law enforcement vehicles.

When the chase reached Edgar County, sheriff’s deputies there took over. The sheriff’s office said the vehicle fled south on Route One toward Paris at 75 miles per hour at times. Once in Paris, the sheriff’s office said the car went against traffic and through several yards. It also struck two sheriff’s vehicles. The vehicle eventually got trapped on Sycamore Road, a dead-end street in a residential area on the north side of Paris. There, Maxwell was arrested.

A person with username @r3ckl3ss037 captured part of the chase on video and posted that footage to the social media app TikTok. In one part of the video, officers have the suspect’s vehicle boxed in at a gas station and are pleading with her to surrender. Officers are heard yelling “Don’t do it!” and “Ma’am it’s okay!” before the woman manages to drive off with the front passenger door open and her back bumper skidding along the road.

Douglas County Sheriff Nathan Chaplin could not immediately be reached for comment.

CHAMPAIGN, Ill. (WCIA) — Champaign County Crime Stoppers is asking for the public’s help in solving an attempted retail theft that happened earlier this month. Officials said that on Nov. 18, a man tried to steal more than $1,400 worth of tools and other items from Champaign’s Home Depot. He was confronted at the door […]
CHAMPAIGN COUNTY, IL・1 HOUR AGO
WCIA

DANVILLE, Ill. (WCIA) — The Vermilion County Coroner has released the name of a 38-year-old man who was killed in a shooting in Danville earlier this week. Coroner Jane McFadden identified the victim as Jordan Marvin E. Dye. Officers found Dye late Tuesday night in the area of East Williams and Pixley Streets; he had […]
DANVILLE, IL・2 DAYS AGO
WCIA

Update 5:53 p.m. Champaign Police said the incident on Krebs Drive does not have any impact on public safety. CHAMPAIGN, Ill. (WCIA) — People in a Champaign neighborhood were left shocked Thursday evening by a large police response outside their homes, interrupting their Thanksgiving evenings. Personnel from the Champaign Police and Fire Departments responded to […]
CHAMPAIGN, IL・3 DAYS AGO
WCIA

Police: U of I student stabbed Thanksgiving morning

CHAMPAIGN, Ill. (WCIA) — The University of Illinois Police Department is asking for the public’s help in solving a stabbing that left a student hurt early Thanksgiving morning near campus. Officials said the stabbing was the result of a physical fight that happened in the area of Green and Fourth Streets. Their initial investigation determined […]
CHAMPAIGN, IL・4 DAYS AGO
WCIA

CHAMPAIGN, Ill (WCIA) — A man was seriously hurt after being shot multiple times Friday morning. The shooting happened on Dennison Drive near Prospect Avenue shortly after midnight. Police said their investigation indicated a group of people were gathered there when an argument started. When the argument escalated, there was an exchange of gunfire. The […]
CHAMPAIGN, IL・3 DAYS AGO
WCIA

CHAMPAIGN, Ill. (WCIA) — The Champaign Fire Department responded to a small fire inside a home Saturday noon. The fire happened on West Williams Street in Champaign. When fire crews arrived, they saw moderate smoke coming from the front door of the home. The occupant was outside at the time of the fire and waited for […]
CHAMPAIGN, IL・1 DAY AGO
WCIA

CHAMPAIGN, Ill. (WCIA) — According to Illinois State Police, there is a high volume of holiday traffic on I-57 southbound and the Market Street Exit near Champaign. Police said crashes and numerous near misses are reported on the interstate. Officers encourage drivers to use a different exit or pay extra attention when driving through this area.
CHAMPAIGN, IL・21 HOURS AGO
WCIA

HOOPESTON, Ill. (WCIA) — Part of Hoopeston is under a boil order due to a water main break. The City of Hoopeston Water Department said the area under the boil order includes W. Main St. to W. Thompson St. and N. Sixth Ave. to N. Dixie Hwy. This order does not include the west side […]
HOOPESTON, IL・1 DAY AGO
WCIA

CHAMPAIGN, Ill. (WCIA) — Traffic on a street in Champaign will be reduced to one lane next week as crews patch several spots in the pavement. The closure will take place on Randolph Street between Healey Street and Springfield Avenue. Starting Monday, traffic on this block will flow through one lane until the patching is […]
CHAMPAIGN, IL・2 DAYS AGO
WCIA

URBANA, Ill. (WCIA) — A teenager could spend the next few years in custody after police said she admitted to making a series of threatening phone calls to Urbana High School. The 15-year-old from Chicago is being charged with making a terrorist threat, a Class X felony. Police said she was one of several people […]
URBANA, IL・4 DAYS AGO
WCIA

Editor’s Note: The original police documents indicate the suspect was 16 years old, but the court made a correction that she is 15 years old. This article has been updated to reflect this correction. URBANA, Ill. (WCIA) — Urbana Police Detectives arrested a 15-year-old female identified as one of the offenders in the terrorist threats […]
URBANA, IL・5 DAYS AGO
WCIA

‘Lighting Up Paxton’ display returns for the first time since 2019

PAXTON, Ill. (WCIA) – “It’s grown now to over 140,000 Christmas lights. That’s what you see on the house this year,” Victor Johnson said. It’s beginning to look – and sound – a lot like Christmas at the Johnson house. “We’ve always been known around Paxton as the Christmas light house when I was younger. […]
PAXTON, IL・16 HOURS AGO
WCIA

CHAMPAIGN, Ill. (WCIA) — Champaign is getting into the Christmas spirit. Many people lined the streets of downtown Champaign on Saturday night as floats, queens and marching bands filled the 22nd annual Champaign Center Parade of Lights. More information about the parade can be found here.
CHAMPAIGN, IL・20 HOURS AGO
WCIA

CHAMPAIGN, Ill. (WCIA) — Firefighters in Champaign responded to a fire at an apartment building that necessitated a two-alarm response Friday afternoon. The fire happened 1101 South Mattis Avenue, a 14-unit building that was vacant at the time. Officials with the Champaign Fire Department said a passerby reported the fire around 1:30 p.m. Firefighters arrived […]
CHAMPAIGN, IL・3 DAYS AGO
WCIA

URBANA, Ill. (WCIA) — A Charleston business owner will spend six months in prison after he was convicted in federal court of tax fraud. Jay Edward Fisher, 53, pleaded guilty earlier this year to the crimes he was accused of. Evidence presented in court showed that Fisher, the sole owner of a Mattoon-based insurance agency, […]
CHARLESTON, IL・3 DAYS AGO
WCIA

New Mattoon winery to open in May 2023

MATTOON, Ill. (WCIA) — A long-expected winery will open in Mattoon in May 2023. Warren James Winery will be located at the 5600 block of Lerna Road in Mattoon. Owners Blake and Cole Pierce said the winery was born out of a love of family and community. “The vision began in 2014 after Blake and I […]
MATTOON, IL・18 HOURS AGO
WCIA